In this experiment using superglue, students will explore a simple fuming technique used by forensic scientists to reveal invisible fingerprints.

Fingerprints are what we call the pattern of ridges on the fingers that provide a rough surface that helps create the friction needed to pick up a baseball or hold onto a pencil; they are also know as "friction ridges". These ridges are formed before birth. By the time a baby is born, there are seven layers of skin, and fingerprint ridges ripple through the top five layers.

Baring loss of a finger tip to injury, or intensive scarring, the friction ridge pattern of individuals will constantly re-grow the same as their skin re-news throughout their lives.

Every fingerprint is unique, but there are certain patterns that can be observed which many prints have in common. Interestingly, even fingerprints from the same individual can vary slightly from finger to finger!

Fingerprints have three main classes of friction ridge: the arch, whorl and loop.

Fingerprints leave behind traces of sweat and oils on surfaces that are not always visible or recoverable by dusting powder. In these cases, a "fuming" technique is used. This technique was developed in Japan in 1977, where Fuseo Matsumura, a hair and fibre expert at the Saga Prefecture Crime Laboratory of the National Police Agency used microscope slides to examine trace evidence that he mounted using superglue. One day, while working on a case, he noticed a fingerprint developing along the side of the glass slide. He presented his finding to a colleague, Masato Soba, who eventually developed superglue fuming.

Cyanoacrylate is a substance in superglue that, when heated, releases into the air as a gas. This gas is attracted to the sweat and oils excreted from fingers and crystallizes to leave behind a white residue that reveals the fingerprint. This processed print can then be lifted and analyzed.

Teacher tip: Use superglue in a well-ventilated area. Superglue can bond skin and eyes in seconds, so be sure to review the safety directions provided on the packaging before starting this activity.

Teacher Tip: Monitor the evidence. If left for too long, the fingerprints will overdevelop and the spaces between the ridges will fill in, obscuring the pattern. 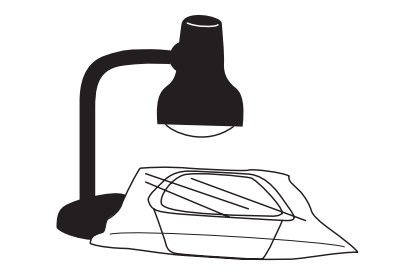 In this activity, students learn how to dust and lift latent fingerprints from an object and then study the resulting impressions. …

Forensic science is a broad discipline divided into numerous subfields, all of which work together to collect, prepare, analyze and…

In this activity, the class is assigned a crime to solve based loosely on the story of Goldilocks and the Three…