Magnets are much more than fun toys - they are the "attractive" science! We use them in all kinds of ways, like determining direction with a compass, or just keeping refrigerators closed!

In these activities, students will use simple experiments and observations to explore magnetism, from determining what is a magnet to creating their own electromagnet.

Magnetic Attraction
Is it a Magnet?
Find the Power!
Opposites Attract
Exploring Electromagnets
Find Your Attraction

A magnet is an object that creates a magnetic field: This field is invisible, but it’s responsible for the most obvious property of a magnet: the ability to attract some materials, like iron, and attract or repel other magnets.

History
The ancient Greeks and Chinese discovered that some rare stones were naturally magnetized, pieces of the mineral magnetite. These so called “lodestones” attracted small pieces of iron in a seemingly magical way, and if freely suspended, they always pointed in the same direction.

The first written mention of a magnet is from the fourth century B.C. in China. The Chinese learned how to make artificial magnets by heating pieces of ore until they were red-hot and then cooling the pieces while they were in a north/south position. The magnet was then placed on a reed and floated in a bowl of water.

These floating magnets were the predecessors of needle compasses, and uses in navigation are first mentioned in a Chinese text from 1088 A.D. The compass was widely used on Chinese ships by the eleventh century AD.

We now make magnets in various shapes and sizes for different uses. One of the most common magnets — the bar magnet — is a long, rectangular bar that attracts pieces of ferrous (iron) objects. 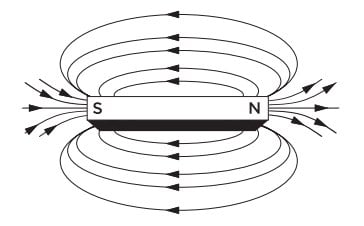 Magnetic field lines don’t exist physically — they’re a mathematical construct to help us visualise how magnets work. However, iron filings around a magnet will line themselves up along the field lines, so we can then see how the magnetic field “looks”. 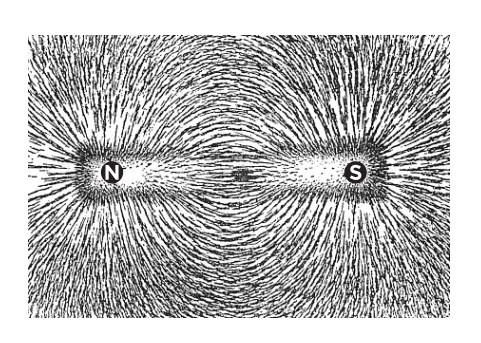 What Makes a Magnet?
The atoms of a magnetic material are themselves tiny magnets. When groups of magnetic atoms are lined up in the same direction they’re called a magnetic domain. If many magnetic domains are themselves aligned, the resulting material’s magnetic field is strong enough to affect other materials some distance away. In other words, it is a magnet.

A permanent magnet carries its own persistent magnetic field. A good example is a fridge magnet. Permanent magnets can be made of iron, nickel or cobalt; these are materials with atomic “magnets” that can be aligned. Materials like iron, nickel and cobalt are called ferromagnetic materials, and they’re also attracted to magnets.

Moving electrons can also create a temporary magnetic field. For example, if one end of a battery is connected to the other end with a wire, electrons move along the wire and create a magnetic field. If you bring a compass near the wire, it will move in response to this field.

The whole Earth is also a magnet. The extreme heat of the inner core creates convection currents in the molten iron of the Earth’s outer core. The movement of the iron creates an electric current which in turn creates a magnetic field. The magntic poles of the Earth are closely aligned to the geographical poles, but they are actually opposite. The north poles of bar magnets and compass needles are attracted towards the geographical north pole because it is actually the Earth’s magnetic south pole!

Some things to remember:

magnet: A material or object that produces a magnetic field that can affect materials around it. A magnet attracts magnetic materials like iron. Permanent magnets always have a magnetic field.
pole: One of the two ends of a magnet where the magnetic field is concentrated.
magnetic material: A material that is attracted to a magnet. It could itself be made into a magnet.
electromagnet: A temporary magnet made by coiling wire around an iron core; when current flows through the coil the iron becomes a magnet.
attract: To draw closer or pull together.
repel: To push away.

Positive and negative charges are opposite and attract, but how does a neutral material react around something charged? In…