If you were able to read the text in the picture above, chances are you aren’t colour blind. But if you are colour blind like I am, all you’ll see is something similar to a pea and broccoli mush. Now when people talk being colour blind (myself included), most often they mean they aren’t able to distinguish between certain colours, frequently red and green – more accurately it’s referred to as colour vision deficiency. Complete colour blindness occurs as well, although quite rarely.

I found out I was colour blind after an afternoon of sibling roughhousing when my sister scratched out a chunk of my eye’s epithelial layer, the thin layer of tissue on the surface of the eye. My parents rushed me to the ophthalmologist where after some testing they told me 2 things:

This is my sister and I nowadays, about 20 years later and still roughhousing just like that day of the eyeball incident:

It’s all fun and games until someone pokes an eye out.

Like any obnoxious little brother, I let my sister believe that my newly-discovered condition was all her fault. Needless to say, I really felt her wrath when she started the genetics unit in high school biology, but more on that later.

How did the doctors determine that I was colour blind?

The most common way to test for colour blindness is called the Ishihara Colour Test, where a person is shown a circle made up of small, differently coloured dots that create an image, like a number or sometimes a squiggle. For those with normal colour vision, seeing the image is no problem. However, colour blind folks aren’t able to distinguish between all the coloured dots and as a result, don’t see any images at all.

Ishihara Plate Sample – What do you see?

There are three types of light-sensing cells in the human eye: cone cells, rod cells, and Intrinsically Photosensitive Retinal Ganglion Cells (they ran out of one-syllable names after the first two). The cone cells are responsible for seeing colour, so let’s focus on those for a minute.

Cone cells, aptly named for their cone-like shape, detect different wavelengths of light and relay these light signals for your brain to translate into colour. For those with colour blindness, there are defects in some of these cells that cause them not to work properly or not even exist at all! 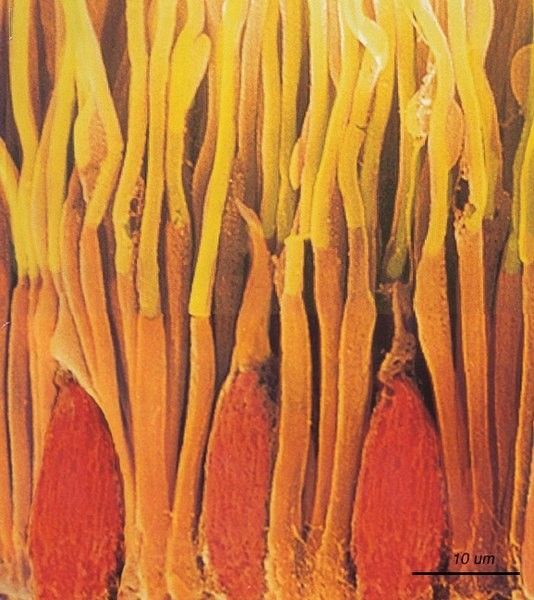 There are different types of colour blindness depending on which cone cells are faulty:

Protanomaly and protanopia – occurs when the red photoreceptor cones are missing or completely non-functional, respectively. I have protanopia, so although I know which things are red (or not), I frequently confuse them as brown, green or grey.

Deuteranomaly and deuteranopia – occurs when the green photoreceptor cones are missing or not working at all, respectively. Similar vision problems as above, but purples are also hard to tell apart.

And so, after learning about colour blindness and X-linked traits in high school, the years of guilt my sister carried for being the apparent cause of my vision deficiency quickly changed into a thirst for vengeance – I remember hiding in my room a lot during that period.

More recently, a friend got me a pair of colour-blind ‘correcting’ glasses that work by blocking out certain wavelengths of light so that reds and greens become distinct from one another. Although they don’t work for everyone, they were quite the literal eye-opener for me: berries on branches became vivid, moss all of a sudden popped up on bricks, and grass became a juicy green that looked so tasty I could almost eat it. Luckily, I have some restraint.

The grass *is* always greener on the other side. Greens become more vibrant with colour-blind correcting glasses, bottom image. 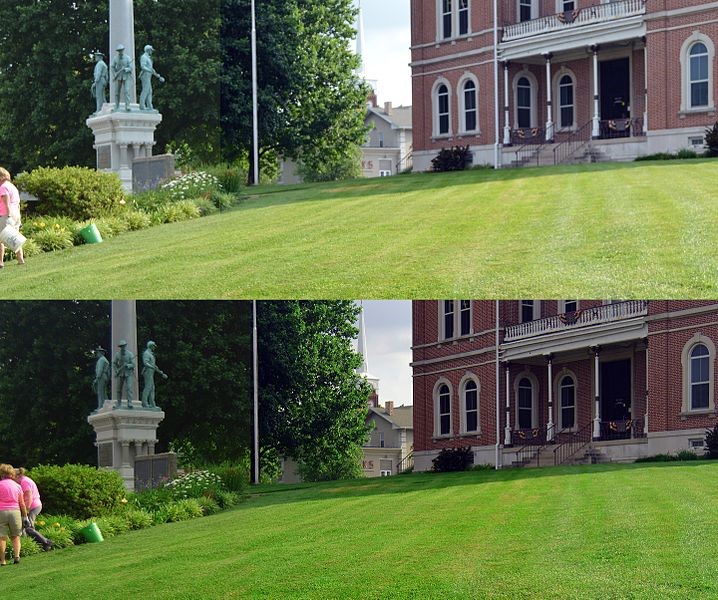 However, spotting hazards can sometimes be a challenge. I once casually stepped over a venomous Australian copperhead snake in the bush without even noticing it; my hiking friends were horrified but it took me a good ten seconds to even spot it. They kindly asked me to stop leading the hikes after that.

Depending on the severity of the colour blindness, it can pose problems. Some unlucky folks aren’t able to tell ripe bananas from unripe ones. More seriously, some people can’t distinguish between traffic light colours, or even tell if either red or green are illuminated. Luckily, thoughtful design is moving towards colour-friendly strategies: The use of retroreflective strips, different symbols and clever use of colours has made it easier to get around. Other municipalities, however, seem to like playing cruel jokes on visitors and design maps using only varying shades of green.

Overall, being colour blind hasn’t had any real negative impacts on my well-being. It may be hard to communicate colours sometimes, but even that just mostly turns into a game of ‘Wait, what colour is this?,’ which I really do enjoy taking part in.

Do you know anyone who is colourblind – and what have their experiences been? Let us know in the comments!