You may have heard people say this before—"Brontosaurus doesn't exist!"

For a long time, Brontosaurus excelsus, the "noble thunder lizard," had been considered by scientists to be synonymous with Apatosaurus, another long-necked sauropod dinosaur found in the same area. The fossil that was thought to be Brontosaurus was so similar to Apatosaurus that scientists concluded that it was probably just another species of Apatosaurus. We've all had to consider that, perhaps, the Brontosaurus didn't actually exist.

But earlier in 2015, an in-depth study of a number of sauropod specimens recovered over the last few centuries was launched by paleontologists. They concluded that the Brontosaurus did exist as a separate genus after all! So what happened and where do we go from here?

The Morrison Formation in Wyoming and Utah, a 155- to 148-million-year-old rock formation where both Apatosaurus and Brontosaurus were discovered in the late 1800s, became the centre of a heated dinosaur-collecting rivalry between two paleontologists, Othniel Charles Marsh and Edward Drinker Cope.

Often referred to as the Bone Wars, the rivalry was spurred on by each side wanting to have as many dinosaurs credited to their name as possible. This made the scientists hurriedly publish the descriptions of the fossils they found. Collectively, they managed to describe hundreds of new species of dinosaurs, but after further analysis over the years, only a few more than 30 were considered to actually be valid.

This is what happened in the case of the Brontosaurus. The size differences between the two skeletons and Marsh’s rush to publish information about any new fossils he found, resulted in him concluding that the Brontosaurus and Apatosaurus were two separate genera of dinosaur.

Another paleontologist, Elmer Riggs, argued a few years later that the two fossils were too similar to be classified like this. His study convinced scientists that the thunder lizard should actually be Apatosaurus excelsus and thus relegated the Brontosaurus to the dustbin. This change didn't become common knowledge immediately and in 1905, the American Museum of Natural History called the skeleton it had, Brontosaurus before it was erected in the museum, further cementing the name's importance in the public’s mind.

A tale of missing skulls

The confusing story of the Brontosaurus's fall from scientific recognition has morphed and changed over the years, taking on new elements and confusing most people along the way. One of the most enduring stories surrounding the Brontosaurus controversy is the one where paleontologists placed the wrong skull on the fossil body and used that evidence to conclude that Brontosaurus was a separate species. But the real story is not quite as simple.

Brontosaurus and Apatosaurus were first given a skull similar to a Camarasaurus, on the left, but later evidence showed that their skull were probably more like that of Diplodocus, on the right. Credit goes to David Button for the image.

Marsh was the first to give a name to the group of dinosaurs with long necks and tails that were being found. He called them Sauropoda, meaning lizard-footed. These were often fairly complete skeletons, but one structure was usually missing—the skull. In fact, neither the Brontosaurus nor the Apatosaurus were first discovered with their skulls. So, when it came time to figure out what head to put on these giants, inferences from surrounding fossil beds and a good bit of haphazard guesswork had to be used. The first proposed head ended up looking stout and blocky.

It wasn't until 1915 that paleontologists challenged this view and proposed that the real skull was probably more streamlined and shovel-like. In the meantime, curators at the Yale Peabody Museum in Cambridge, Massachusetts created an even stranger-looking skull to put on top of their headless sauropod. It wasn’t until the 1970s that definitive evidence came along to prove that the Diplodocus-like skull was the right one, rejecting both Marsh's and the Peabody Museum's guesses.

Complicated? You bet. Lack of evidence coupled with the sometimes ineffective methods of communication by scientists to the masses about new scientific developments, makes it easy to see why the Brontosaurus  was a topic of controversy for so long.

The Brontosaurus is back—or is it?

Fast forward to 2015. Emanuel Tschopp, Octavio Mateus, and Roger Benson are three paleontologists set out to clean up the convoluted sauropod family tree. Specifically, they're looking at diplodocid dinosaurs or those similar to Diplodocus and its relatives. Running analyses on the 477 different morphological characteristics between 81 individual specimens, they were able to not only pull together a better tree of relationships between these animals, but they also found that Brontosaurus was in fact distinct enough from Apatosaurus to become, once again, its own genus! 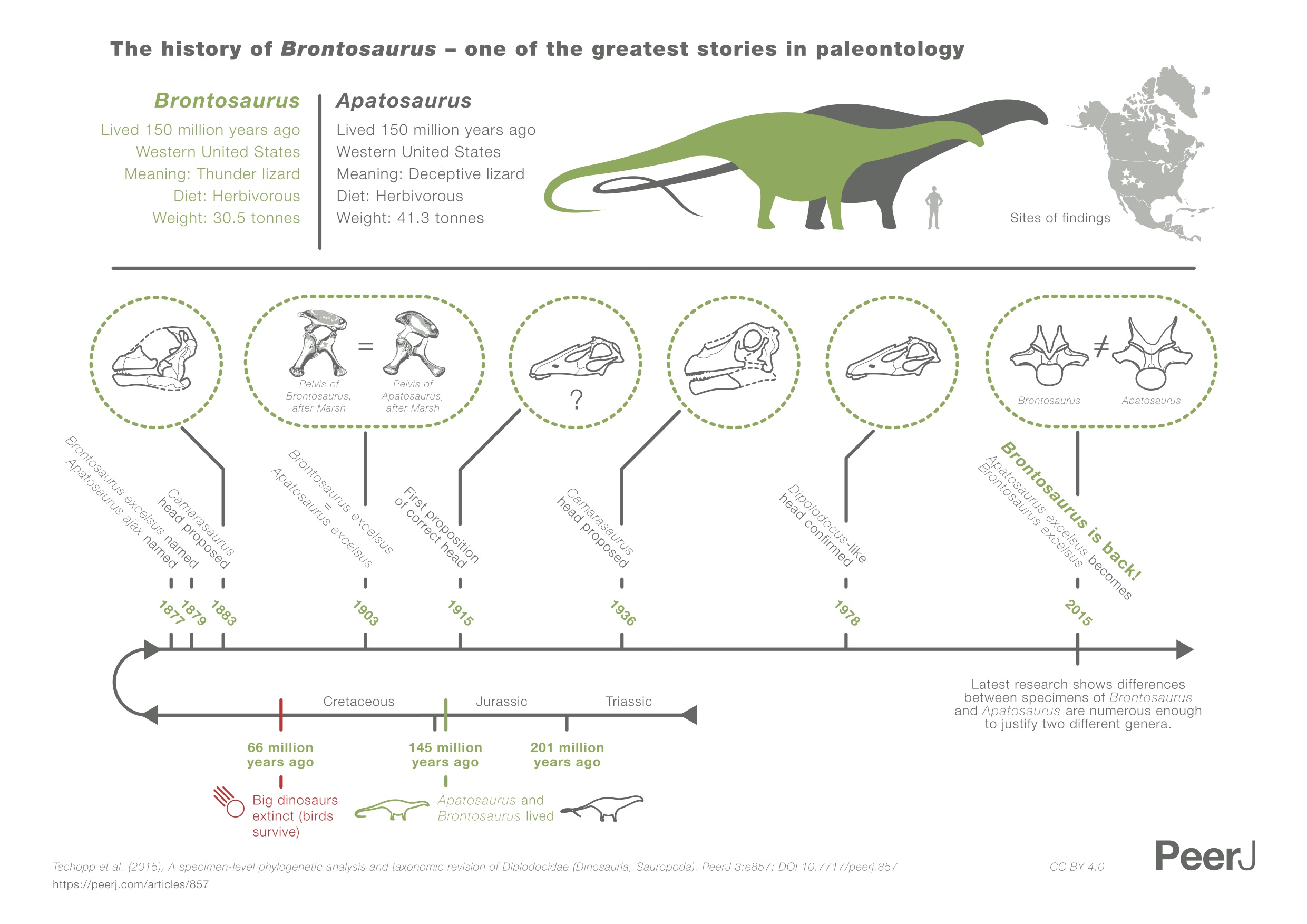 The history of Brontosaurus' struggle for scientific recognition, by Emmanuel Tschopp et al in their 2015 paper. The different proposed skulls for both Apatosaurus and Brontosaurus can be seen here.

Well, not so fast. Dinosaur phylogeny—the way we describe the relationships between different species—has been a hot topic of debate, since the first discovery of fossils. Paleontologists are divided into two camps: lumpers and splitters. Lumpers use methods that lend them to grouping similar species together in fewer genera. Splitters use methods that convince them of a greater diversity within the dinosaurs. We rely on the differences in physical characteristics of the fossil bones to tell us what kind of dinosaur we're looking at, but that method isn't always perfect.

Members of the same genus can look different from one another. For example: lions, tigers, leopards and jaguars are all different sizes, with different coloration and even some of their bone structures are slightly different, but they all belong in the same genus, Panthera. With living things, we can use DNA to tell us how closely related two species are to one another, but that's not an option with fossils, where the DNA has all but disappeared after millions of years.

So what does this mean for our dear old Brontosaurus? We can think of dinosaur names as hypotheses or the best guesses we have about how these ancient animals were related to one another. Over time, these guesses may be proven right or wrong. This is exactly what's been happening with Brontosaurus. Our best guess was proven wrong before, but it may be proven right once again!

Did you know that Brontosaurus had a southern cousin—the Malawisaurus? Come and check out Ultimate Dinosaurs (running until Sept 7,2015), Science World's new feature exhibition and learn about it and other unique dinosaurs from South America, Africa and Madagascar.