Narwhals are known for their long ivory tusks that spiral away from their heads, but what else do we know about narwhals? Apparently not much, according to Bruce Claggett of News 1130, who asked our audience questions about the narwhal, during this month's Café Scientifique.

On November 13, 2013, Science World invited three narwhal experts to come share their knowledge and experiences. The experts were: Isabelle Groc, a freelance environmental writer and wildlife photographer; Ernie Cooper, Director of TRAFFIC and Wildlife Trade at WWF; and Cortney Watt, PhD student at the University of Manitoba. 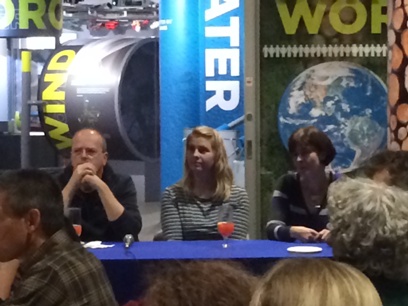 Bruce Claggett moderated the interactive discussion to a packed room, while Isabelle Groc displayed her beautiful photos of narwhals taken off the coast of Baffin Island. Here are some of the highlights of the session:

Why do we know so little about narwhals?

The narwhal is an elusive mammal, only found up north in the arctic waters of Canada, Greenland, Norway and Russia. Since it is extremely hard to keep narwhals in captivity, it is extremely hard to study them. In order to study narwhals more closely, a large team of researchers, members of WWF and members of the Inuit community, along with a journalist teamed up to tag their fins with GPS tracking clips that gather data on how deep they dive (approximately 1,500 metres) and their swimming patterns. This data is then sent to a research facility for analysis.

What do narwhals eat?

Greenland halibut, Arctic cod, squid and shrimp. Cortney Watt has a great video about her research on this topic.

Do they use their tusks to fight?

No they don't. Tusks on male narwhals are used for sexual selection. The larger the tusk the more likely they are to get a female mate. Some females have tusks, but it's very rare. If they do have tusks, their spiral is different than a male tusk and also not as dense. When a tusk breaks off, it cannot grow back. New research theorizes that narwhal tusks could contain sensors that measure the salinity of the water.

How does the changing climate affect the narwhal population?

Narwhals use sea ice to navigate the waters. According to Cortney Watt, narwhals are very intolerant to changes in their environment. A one degree change in the water can severely damage a narwhal population. This is why they are so hard to keep in captivity. But there are other factors that also threaten the narwhal population, such as increased fishing of their food, hunting and sounds. Vibrations in the water from earthquake testing up north can hurt a narwhal. Interestingly, the narwhal is not on the endangered species list. Because they are so hard to track, their population can only be estimated.

What can we do the save the narwhal?

If you eat seafood, make sure it's ocean wise. Decrease your carbon footprint by biking, walking or taking transit to work. To learn more about decreasing your carbon footprint, visit Science World’s Our World Gallery. If you want to see narwhal tusks up close and personal, visit our Search: Sara Stern Gallery.