This article about the benefit of public art is powered by Concert Properties, presenting sponsors for Science World’s feature exhibition Towers of Tomorrow, empowering us to explore the intersection of urban planning and community collaboration.

Last spring, Anthony Joseph felt surprised to receive a call from the curators of Vancouver Mural Festival (VMF). He'd assumed the global pandemic would cancel the annual public art fair that draws 125,000 people to the streets of Mount Pleasant every summer.

“But, they said now more than ever, they wanted to continue to add art and colour to the city.”

Residents of Vancouver look forward to new fireworks of colour along the streets every summer. Helping to build a society which deeply values art and culture, VMF offers neighbourhood-sized canvases to local, emerging artists.

Organizers founded VMF the same year that Vancouver City Council voted for developers to pay larger contributions for public art. According to Counsellor Heather Deal, this 1.5% increase added “a robust amount of money into the public-art program."

In the centre of a public courtyard near Olympic Village sits Eyes on the Street. This massive stainless-steel sculpture by Marie Khouri and Charlotte Wall was funded by Concert Properties, sponsors of Science World's feature exhibition Towers of Tomorrow with LEGO® Bricks. It's one of Vancouver's many examples of developer-funded public art. 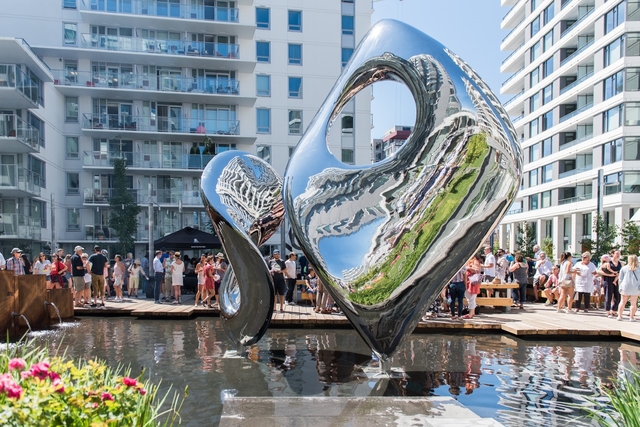 Referencing celebrated city planner and author Jane Jacobs, Eyes on the Street brings to life the concept that people’s active use of public spaces is a vital component of urban planning. She wrote, “When there are people present in a public space such as city streets, it strengthens the space and inspires social cohesion.”

Anthony Joseph's mural Hope Through Ashes: A Requiem for Hogan’s Alley definitely gets “eyes on the street.” But, of higher importance to him, it also “serves as a common ground for everyone in the community.”

Today, the narrative painting spans the entire south façade of the Georgia Viaduct. It runs through what was once the heart of a diverse enclave. “The mural resets us, in terms of where our values stand. What I like to call, a joie de vivre.”

“As we painted it, we received thank-yous from all walks of life, and questions. A curiosity that brewed discussions of community and culture.” 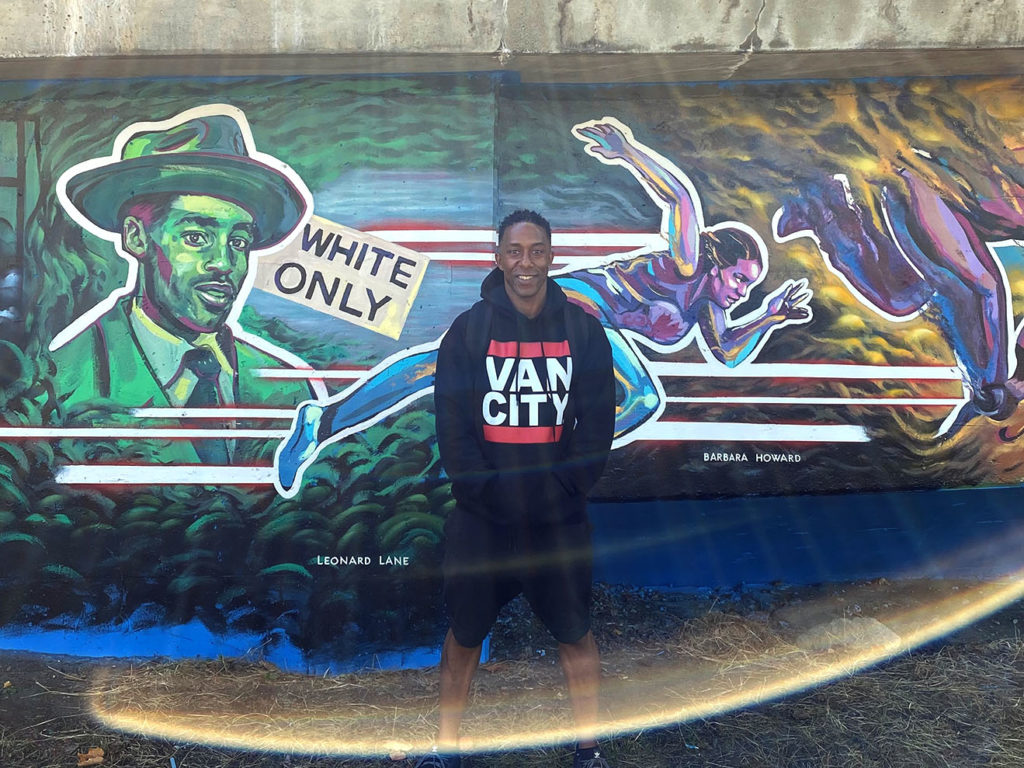 A Road from Past to Present

The first Black settlers arrived in BC from California in 1858. By the early 1900s, a neighbourhood running between Prior and Union and Main and Jackson became home to a number of families and businesses. By the mid-30s, the area was a vibrant cultural hub, whose popular speakeasy Vie's Chicken and Steaks drew world-famous entertainers like Louis Armstrong, Lena Horne and Sammy Davis Jr. The area became known as Hogan’s Alley.

In 1970, the city razed the neighbourhood to construct the Georgia Viaduct. The demolition displaced the Black community and contributed to the erasure of its history and presence in Vancouver.

Anthony Joseph says he designed the mural to both call attention to that erasure and to celebrate the community’s legacy. Hope through Ashes features a selection of people who made significant contributions to Vancouver’s politics, activism and culture.

The Benefit of Public Art

At the head of these figures stands Nora Hendrix, a community organizer who helped establish the African Methodist Episcopal Fountain Chapel. People congregated at the church not only for spiritual union, but also to mobilize against police brutality. Her last name reminds us that, for a period of time, she raised her grandson, late guitarist Jimi Hendrix, in Vancouver.

Anthony placed her “on the frontlines” because she spearheaded so many major grassroots initiatives in Hogan’s Alley. Her leadership called for the retrial of Fred Deal, whose death sentenced was reduced to life in prison.

In a pose of strength, Hendrix holds a golden shield up against golden axes and oars, all symbols found on the City of Vancouver’s flag. Anthony explains: “For her to hold the shield, it shows that this is an internal conflict. The city wasn’t taking down the Black community, it was taking down a part of itself.”

This is Anthony’s third mural. Before moving to Canada, he completed two others in Minneapolis. He believes the benefit of public art comes from its ability to reanimate stories from the past that have been repressed.

“History has a way of repeating itself when history’s lost. So, let’s not forget. When that viaduct comes down, may it be something that we can all benefit from.”

Visit dreamscapes of the future.

Towers of Tomorrow, presented by Concert Properties and White Spot Restaurants and supported by TransLink, is open until January 2021! Learn more about the science and engineering behind extra-tall architecture.