What could other life in our solar system possibly look like? Unlike the stereotypical green Martians of movies and TV shows, aliens, if they exist, are more likely to be microscopic organisms.

We have long been fascinated by the possibility of life on Venus or Mars, but new findings from the Cassini and Galileo missions have revealed that our solar system’s most likely candidates for extraterrestrial life are not actually on planets at all, but on moons of the outer solar system. Europa, Jupiter’s fourth largest moon, seems to be an especially promising prospect.

Flyby scans by the Galileo spacecraft have revealed that Europa has a cracked, rippled shell on the icy moon, which could indicate the tantalizing possibility of a subsurface ocean. Since even the smallest organisms need fuel to survive, the question of how much energy is below Europa’s surface remains a mystery. The thick ice rules out sunlight as a possible energy source, so it's possible that the moon’s geological activity may provide the energy the ocean needs to sustain life.

Scientists speculate that heat from the moon’s core melts the lower layers of the ice and releases small pockets of trapped air. Since Europa’s surface is saturated with oxidative chemicals such as oxygen and sulphur, the trapped air could react with core iron and methane to produce fuel. We’ve seen similar processes at work in the subsurface lakes of Antarctica. For example, the extremophile microbes of Lake Whillans harness energy from these chemical reactions instead of light from the sun. 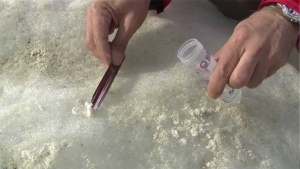 Recently, Canadian researchers found another model of the Europan surface that exists in our own backyard—a glacial spring on Nunavut’s Ellesmere Island, which looks a lot like the moon’s sulphur-rich ice sheets. The same sulphur compounds that give the terrestrial glacial spring a distinctive yellow colour are present on Europa, which create brown streaks in the ice. Since the spring in Nunavut is teeming with microscopic life, despite the harsh cold conditions of the Canadian north, the possibility exists that similar life forms could be found on Europa.

With a NASA flyby mission to Europa in the works, scientists will continue to study the resilient microbes in the Nunavut ice sheets for clues on how they obtain nutrients and energy. These findings will help NASA design instruments to detect signs of life in Europa’s oceans—the first step to finally uncovering the hidden secrets of the frozen moon.

Read more about the planned Europa Clipper flyby mission and the possibility of life on the icy moon. You can also check out the many different forms of microscopic creatures at Science World’s Invisible Portraits art exhibition, on now until March 30, 2015.