On those rare occasions when I am in our car by myself, I like to listen to interviews on AM radio. But sometimes weird noises overwhelm the broadcast, and I don't mean politicians. I wondered why this only seemed to happen with AM radio.

Radio waves are a form of electromagnetic radiation, like light, except at a lower frequency and not visible. They are non-ionizing radiation, so they do not carry enough energy to affect chemical bonds but the effects of magnetism on biological systems could use further study. Using radio waves to transmit signals was first developed back in the 1870s, and later helped transform society.

The sound waves of a human voice vibrate at a range of 300 to 3000 cycles per second or Hertz (Hz), a unit named after German physicist Herman Hertz, who studied the production and reception of radio waves. A microphone converts these sound vibrations into electrical energy. The length of the antenna required to transmit a signal is related to the wavelength. Directly transmitting frequencies in the audio range would have long wavelengths requiring a humongous antenna and lots of amplification. Instead, an oscillator generates a carrier wave with a higher frequency resulting in a shorter wavelength and more manageable antenna. The carrier wave is also of a constant frequency and amplitude.

The AM in AM radio has nothing to do with morning shows — it stands for amplitude modulation. FM radio uses frequency modulation and is not susceptible to static for reasons we will discuss. Compared to FM radio, AM radio tends to have poorer sound quality, but is cheaper and can be transmitted over long distances. AM Radio frequencies range from 540 to 1600 kilohertz (kHz). In Canada, the Canadian Radio-television and Telecommunications Commission controls the assignment of frequencies to radio stations, separated by 10 kHz intervals. 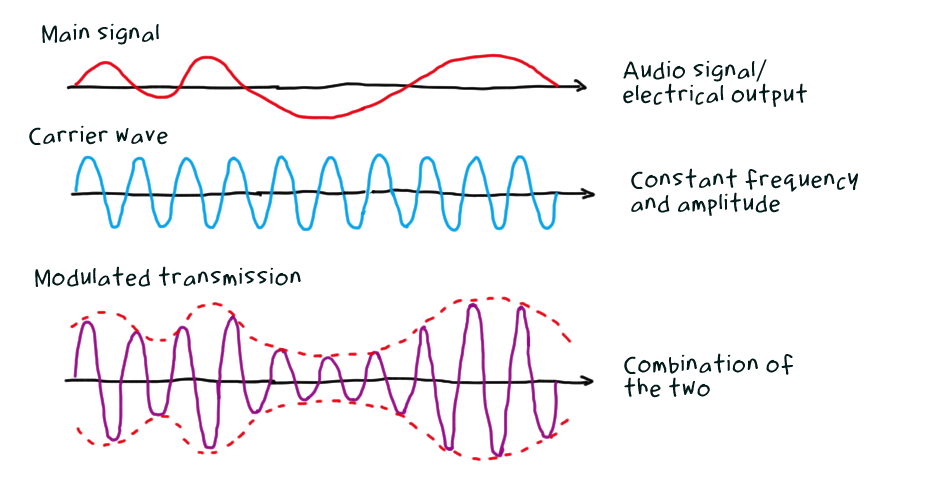 The antenna in an AM radio is a wire or a metal stick that increases the amount of metal that interacts with radio waves over a range of frequencies. Selecting a channel focusses on a particular frequency of that station. A demodulator filters out the carrier wave and transforms the amplitude variations into audio voltage variations, the reverse of what happened back in the microphone. The result is amplified and sent to speakers/ headphones that change the voltages into audio.

Many other sources produce radio waves, including the sun, lightning, and power lines. If the frequency of these other waves overlap with the intended channel, the AM receiver can pick them up as changes in amplitude, resulting in noise or static. Sometimes the car itself can be a source of the interference, but in my case, the static occurs intermittently. I've noticed it at night, so the sun is probably not a major cause, and the sky has been clear, so storms are not the issue. Some people use their AM radios to explore "spherics" (short for atmospherics) and search for approaching electrical storms. One person's interference is another person's hobby.

This seems to suggest power lines as the likely culprit. Initially, I noticed the interference when I travelled along trolley bus routes. Trolley buses have rubber tires and run on electricity using two poles, one to connect to an overhead power line and the other to connect to a grounding wire. The power line usually runs 600 volts of Direct Current (DC). This should result in a steady magnetic field and might be less of an issue than regular power lines using Alternating Current (AC) known to cause interference, especially where connections are flawed. So I'm still not exactly sure of the problem, but it seems I can't do much about it, so I guess I'll have to listen to the programs as podcasts later on.

If you can add some clarity to this question of radio interference, please leave you comments below.