On a recent family vacation to Costa Rica, I went on a tour of a coffee plantation, that made me wonder how coffee grows.

Like most plantations in Costa Rica, this place only grows Coffea arabica, the most popular species of coffee, commonly just called Arabica. It originated in Ethiopia but is now grown in places like Costa Rica that fall within the Bean Belt, the sunny region straddling the equator from the Tropic of Cancer to the Tropic of Capricorn. In addition, Arabica coffee grows better at higher altitudes, between 610 and 1829 m above sea level in rich, well-drained soil, at temperatures between 16 and 24 C with a rainfall of 152 cm. The place we visited in the Central Valley of Costa Rica, seemed to meet most of those criteria. Starbucks has also opened a coffee research facility in Costa Rica, though according to our guide, local growers are not all thrilled with the development. The coffee industry is a large and contentious subject. For this post, I’ll stick to the details of coffee growing at the organic, fair trade coffee cooperative we visited. Other standards and methods for coffee growing exist, from more destructive approaches to the more environmentally rigorous Bird Friendly coffee standards the Smithsonian Institution has developed.

Europeans first introduced coffee to Costa Rica in the late 1700s. By the mid-1800s, the economic benefits of coffee led it being called, “el grano del oro,” the gold bean (not to be confused with a blonde roast).

Although this is kind of a chicken and egg issue, let us begin with the fruit of the coffee plant, which starts off green. As they ripen, they become red like cherries, which is what they are called. They begin to darken as they become overripe. The fruit forms in clusters, containing fruits of varying degrees of ripeness, which is why human labour is required to pick the suitable ripe ones. The slopes also make it difficult to operate machinery on them. They harvest cherries from October to March. 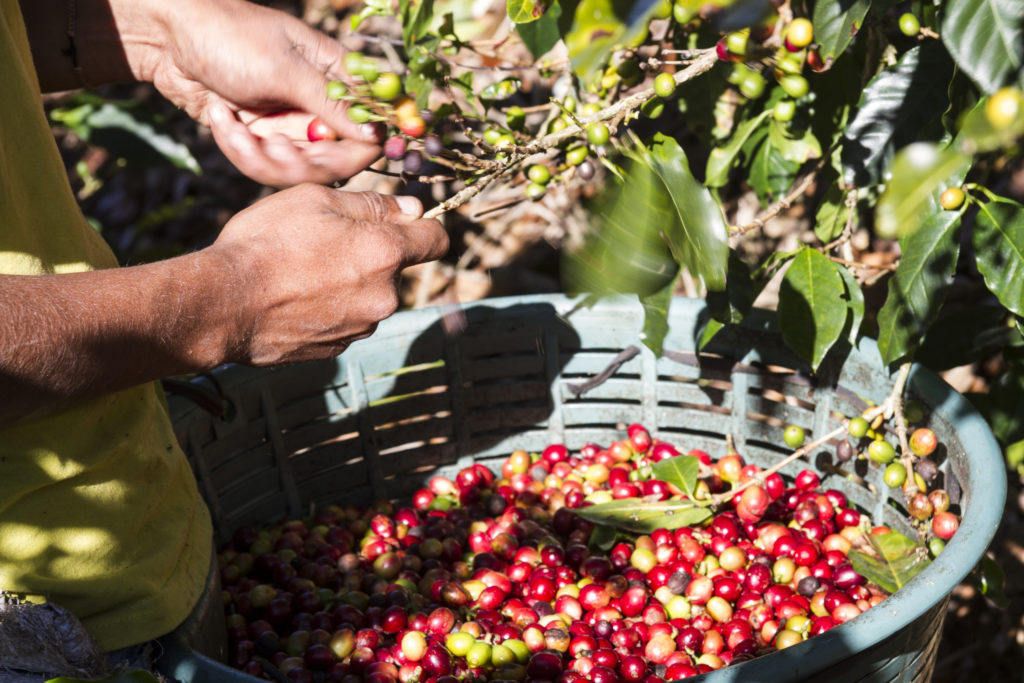 The beans are seeds. Each cherry usually contains two, but can contain one to three. If you pop the cherry, the seeds come out, feeling a bit slimy. They can be planted later and stored for up to a year. Some places sprout them in sand covered in burlap. Our guide just had us plant them in some soil to a depth of a few centimetres. After about a month, they have sprouted with the bean still attached to the top, like a helmet. They call it the "little soldier," even though Costa Rica does not have an army. The sprouts are grown in a nursery, carefully monitored and protected from direct sun. 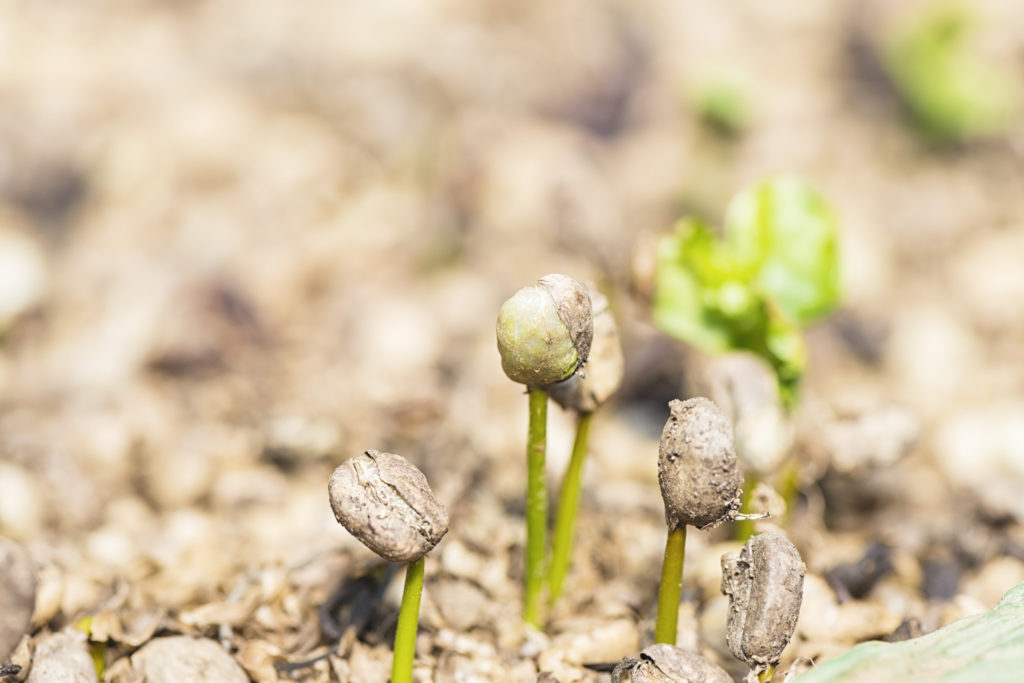 After two months, they have sprouted initial leaves which are lobed like the wings of a butterfly. Costa Rica has lots of butterflies. In in about 3 months, these initial leaves fall off as the regular leaves develop. They are glossy and tapered at the ends, like the outline of an eye, an average looking leaf. The exact timeline for the initial stages seems to vary depending on conditions. When they reach 20 to 40 cm, they get transplanted to coffee fields. Our guide said that they plant the coffee plants in pairs because the competition between the plants results in a greater yield of beans.

This is where the process can differ in many ways. Shade grown coffee grows among other plants, resulting in greater biodiversity. The place we went to did not seem to be shade grown, though the area was surrounded by forest and they did have some guava and banana trees among them and was surrounded by forest. The banana trees soak up a lot of water during the rainy season and then release it during the dry season.

After about four years old, coffee plants are ready to produce. They get pruned in the middle so they don't grow so tall, keeping the cherries more easily accessible to pickers. The plants also put more energy into producing cherries rather than growth. They get pruned every two years.

One of the problems with monocultures is that they are more prone to insect infestations. Broca beetles, also known as the coffee borer beetles, is a scourge of coffee growers. It eats coffee beans and can lay about 40 eggs inside a coffee cherry or green bean. As an organic plantation, the place we visited did not use direct pesticides on the plants, but relied on traps baited with insect pheromone to attract the beetles which were killed with alcohol. The practise of ongoing harvesting and removing all the beans at the end of a season also helped control beetle populations. 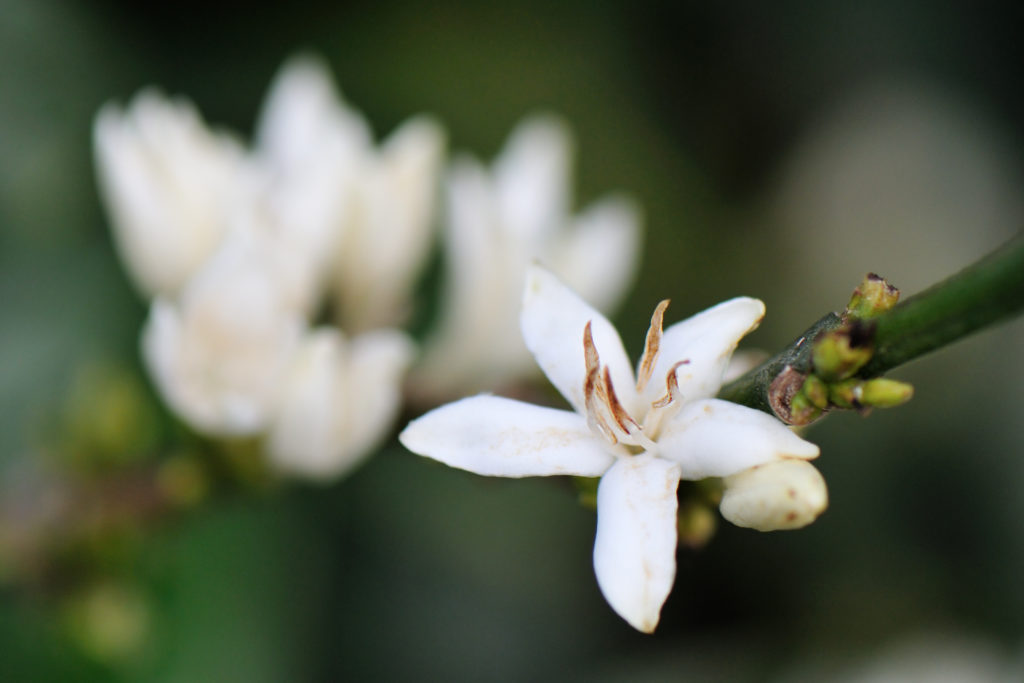 Removing all the fruit at the end of the season also makes more room for a new crop of flowers, which sprout at the bases of the leaves. The plants we saw were in bloom with small, white, star-shaped flowers. Local bees and other flying insects pollinate the flowers to produce the fruit which contains the beans.

This post won't be provide the grounds to start your own empire, but perhaps it will perk your interest in what goes into your cup.