Recently, I volunteered for a brain study at UBC so I could see what my brain looked like. I was part of the control group, so I didn’t receive any special treatment, but I did get an MRI of what’s in my head. Once I was finished admiring my beautiful brain, I wondered about how an MRI worked.

MRI stands for Magnetic Resonance Imaging. An MRI machine can generate a magnetic field up to 60,000 times stronger than the magnetic field of the earth. This means that you can’t have any metal on you or in you while in the machine. Otherwise, bad things could happen, perhaps like when Magneto makes metal fly around. They told me even tattoos can be a problem because of residual metal left in your skin by less reputable practitioners. They asked me a series of questions to make sure it would be okay for me to do it. Tooth fillings seemed alright.

In 1970, Raymond Damadian received the first patent in MRI for its use in medical diagnosis in 1970 and now its use is widespread. MRI is possible thanks to the hydrogen atoms in your body. The nucleus of hydrogen is just a proton. It is positively charged and spins with some randomly distributed orientation under normal circumstances.

Magnetic resonance occurs when the MRI machine sends out a magnetic pulse and the protons line up with the magnetic field. When the pulse ends, the protons return to their resting orientation and release radio waves that are detectable. Detectors sense these emissions and uses the location information to create an image. Paul Lauterbur and Peter Mansfield received a Nobel Prize in 2003 for their insightful ideas on this.

An MRI machine is a giant lifesaver that you lay in the middle of, as if you were the tongue in the mouth of the Rolling Stones logo, to mix metaphors.

The technician gave me earphones as well as headphones. She was able to speak to me through them to let me know what was going to happen next. She also offered me a choice of music to listen to. I lay down on the sliding bed and they secured my head in a frame so I couldn’t move around. The frame held a little angled mirror above my eyes that reflected the image of a tattered tropical poster on the wall. This is supposed to help claustrophobes.

Even with headgear, the machine was really noisy when running. The noise comes from the metal coils vibrating when they receive rapid pulses of electricity. Three gradient magnets control the position of the main magnetic field, so that a series of slices, a few millimeters thick, are captured in any direction and for any part of the body, without moving the patient. These various scans took from about 4 to 12 minutes each and I was in there for maybe an hour altogether, listening to a symphony muzak and a leafblower.

The noises differed in location and frequency in relation to the orientation and timing of the pulses. This timing can enhance the appearance of different types of tissue. For example, the T2 scans tend to make fluids look brighter. As diseased tissue tends to result in more fluid build up, this observation can help detect problems more readily. I did not get any analysis of my results, although they said that if they noticed anything bad, they would let me know. If you are interested in which parts are which, you might check out the Atlas of BRAIN MRI.

I haven't been able to find out whether I should add my brain scan to my resume, but it was good to know at least something was in there. 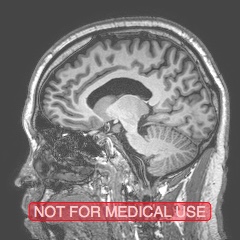 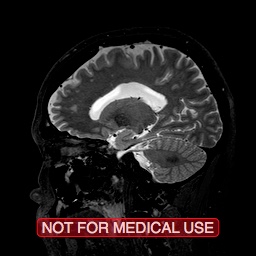 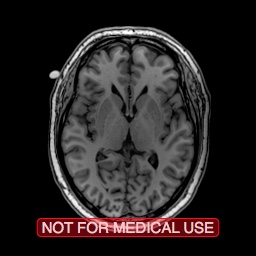 Still curious? Find out what happens when you get a colonoscopy or why eye doctors use air puff eye tests.