In January and February, when the weather can be tedious, I am glad to have a shrub in my backyard sprouting red flowers to brighten my day. But as much as I appreciate these botanical fireworks, I have often wondered why it blooms at this dismal time of year.

What’s in a Name?
Witch hazel comprises five species in the genus Hamamelis. You may have heard of witch hazel because an extract from the bark of the common witch hazel of eastern North American Hamamelis virginiana, is popular as an astringent. The “witch” part of the name apparently comes from the Old English “Wych” meaning “to bend”. European settlers in the New World used branches from witch hazel as dowsing rods to find water, a dubious practise I won’t go into. The hazel comes from the similarity of the leaves to the hazel nut.

Mixed Heritages
Hybrids of the Chinese (Hamamelis mollis) and Japanese witch hazels (Hamamelis japonicus) known as Hamamelis x intermedia are popular for their flowers, shape, and hardiness and I think mine is one of these cultivars. All members of Hamamelis seem to bloom at weird periods when you might not expect to see flowers, either really late in the fall or into the winter.

The Bait
The long, thin, bright yellow or red petals present a conspicuous target and the presence of stamens next to its source of nectar, suggest a relationship with insect pollinators. The blooms tend to last a while to give pollinators more of chance to do their business.

Potential Suitors
The common witch hazel H. virginiana seems to have various insects as potential pollinators, including bees and flies that seek out its nectar. It is also a host plant for the larvae of the Spring Azure butterfly. But random early emerging honey bees would not be a  reliable reproductive strategy.

A Likely Culprit
Naturalist Bernd Heinrich noticed owlet moths (Family Noctuidae) or winter moths, can shiver to raise their body temperatures enough to be active on cold nights. Apparently these feed on the witch hazel and inadvertently pollinate it. They don’t totally depend on witch hazel, however, as they feed on the sap from other injured trees. Because other flowers are rare when witch hazel is out, any pollinator is more likely to bring pollen from one witch hazel to another, increasing the likelihood of reproduction. 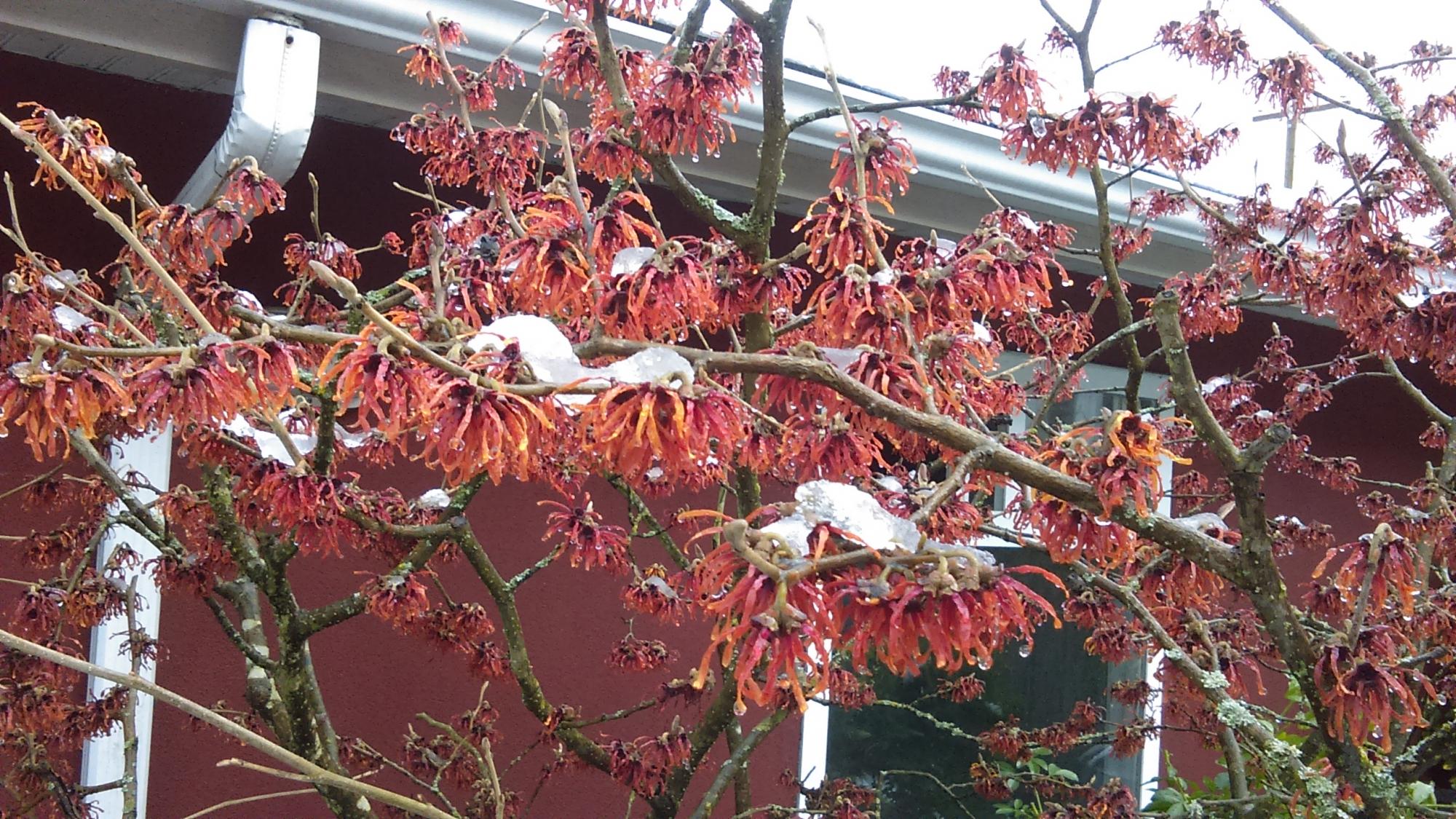 A Visitor
I have seen winter moths on my street late in the fall but not in the winter when my witch hazel is blooming. Since my shrub is an artificial hybrid bred for its looks and hardiness anyway, I would not necessarily expect it to have a ready, willing and able pollinator.

Fruitful Consideration
Perhaps the advantage to the off-peak blooming season is that any pollinators will probably get to another witch hazel and be able to pollinate it. They do tend to produce fruits and leaf buds of different generations all around the same time. I will keep an eye on them to see if they appear. But not too close an eye, as they are known to expel two shiny black seeds explosively.

If you have any insights into witch hazel pollination, please add them in the Comments.