Recently, I volunteered as a control for a study of brain stimulation therapy for major depression by Dr. Fidel Vila-Rodriguez at the UBC hospital. The technicians gave me some cognitive tests, an MRI and an EEG. An electroencephalogram (EEG) is a non-invasive method that detects the electrical activity emitted from the surface of the brain. They can be used as a diagnositic tool for detecting epilepsy or stroke. I did both tests twice, a few months apart. Since I've written about the MRI before, this time I'm sharing what I found out about EEGs.

EEG stands for electroencephalogram. Encephalon comes from the Latinized form of the Greek for brain. An EEG is a noninvasive test of the electrical activity on the surface of the brain. Brain waves were first discovered in animals in 1875. Hans Berger was the first to record them in humans in 1925. He was so surprised by the results that he did not publish them until 1929 and was met with skepticism for some time. But by the 1950s, EEGs became widespread in its use for detecting brain activity. Nowadays, it used to help diagnose epilepsy and other brain disorders.

Before going into an EEG, you need to discuss whether you are taking any medications that can affect brain activity, such as sedatives and you’re not suppose to have caffeine for a few hours before hand. You’re not supposed to put things in your hair or do anything to it. I don’t have much hair, so this did not seem to be an issue. They also ask you how much sleep you had.

You might be asked to lie on a table or sit in a chair. I sat in a chair. They put on something that reminded me of the bathing cap my mother used to wear, except instead of latex flowers it had lots of wires attached (see picture above). They had different sizes to ensure a snug fit. Using the cap allows them to have the electrodes aligned more consistently for data collection.

I had the standard sort of EEG. Other EEG types include ambulatory EEGs, worn around your waist to record your activities while wearing it, and video EEGs where they video record you as well. This is usually to evaluate sleep disorders and involves staying at the hospital.

The technicians-in-training (Science Coop students) applied an exfoliator to my scalp to improve the contact for the electrodes. It sometimes stung a little, but I was able to tough it out. They checked their work against the computer screen (see below) showing the spots corresponding to the electrodes on my head, which reminded me of the model of the Death Star in the original Star Wars. Anyway, when the circles turned green, the contact was good. 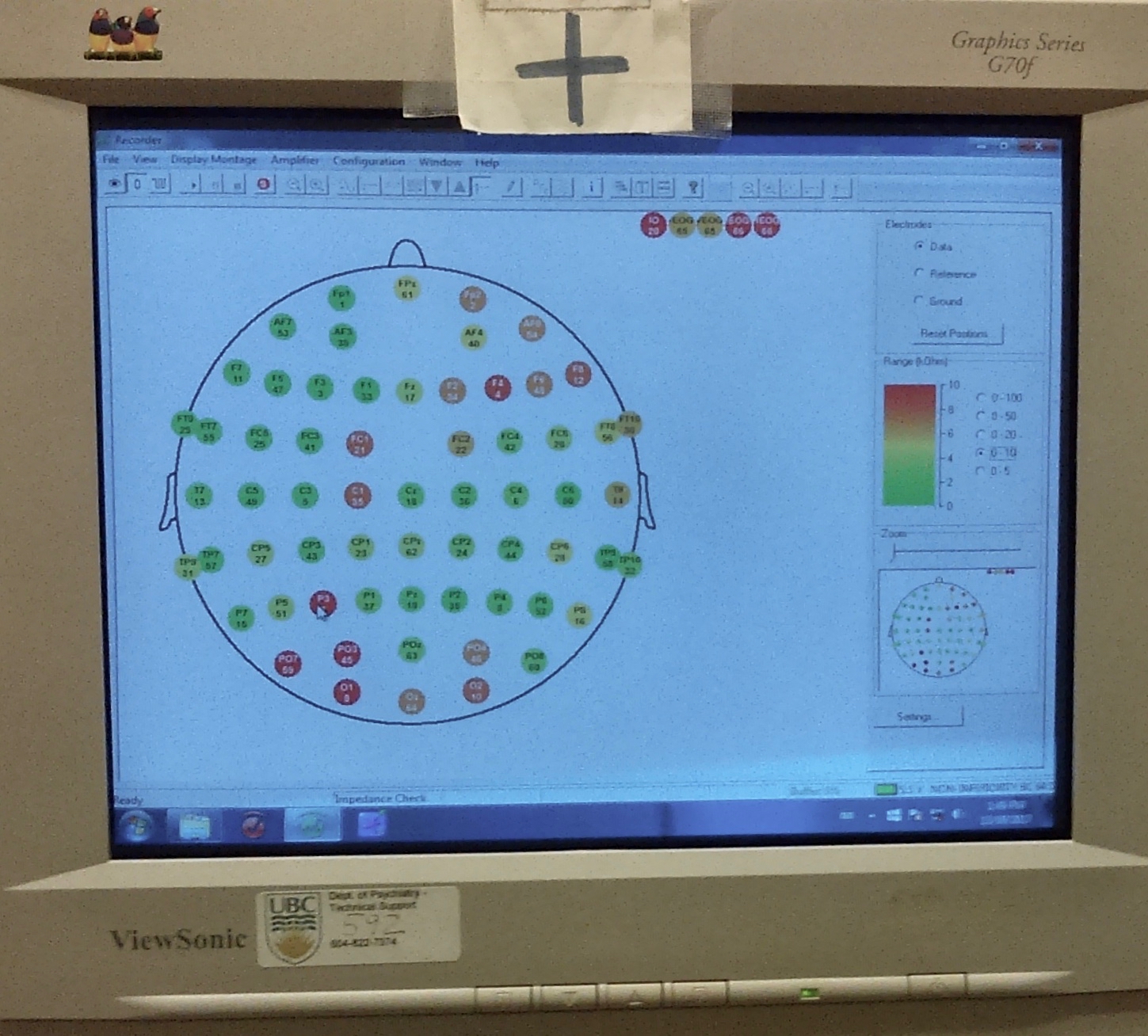 Once they were ready, they showed me what they would be recording. Each electrode picks up an electrical signal emitted from many neutrons firing in a region. This signal goes to an amplifier that then gets analyzed. Sometimes activities in certain areas can give clues as to what parts of the brain are busier.

A benefit of the EEG is how quickly it can collect data, taking thousands of snapshots per second. Results used to be plotted on scrolling paper, but now it is displayed on a screen (see below).

I still find it kind of shocking (not literally) that they can detect enough electricity from my brain through my thick skull. Three main sources of noise need to be filtered from the results:
external noise from other electrical devices in the vicinity;
artifact noise from unintended movement; and
background noise from brain activity that is separated from the components of interest.
When I went, they attached separate electrodes above and below my left eye, I suppose to detect eye movement to help filter out artifacts. They showed me how the waves reacted to blinking or clenching my teeth.

Through the wonders of technology, the brain waves can be sorted into frequency ranges. These were initially assigned without knowledge of their relationship to brain activity, yet they still seem to be useful for comparisons. The most commonly examined ranges are Delta, Theta, Alpha, and Beta. They are sometimes written in their Greek letters, to make them look more scientific I suppose.

Some studies also look at the Gamma range, which is an even higher frequency.

When I did my test, I was exposed to a series of buzzing sounds at different frequencies which repeated for a few minutes. Then they did the same thing with the computer screen flashing on and off at certain frequencies. I did not see how my brain waves looked, but I am supposing the researchers were looking at how the various brain waves responded and where in the brain they occurred.

In the study I was involved with, it seemed that they were part of a variety of observations about brain function. I don't know what the results will show, but it was interesting to think about how what I think with works. The brain waves reminded me of the weird Mindball exhibit in BodyWorks at Science World, where you are supposed to control the path of a ball using brain waves. BodyWorks curator Friderike Moon, who has done EEG studies in Germany, told me that the game only tracks the waves from the front part of your brain, ranging from theta to beta and can be difficult to control, not only because of our erratic brains, but also because of all the external noise and uncontrolled conditions.

EEG is an important diagnostic tool to detect epilepsy, and lesions in the brain from tumours or a stroke will have unusually slow EEG waves. But additional information is still required for a final diagnosis because a given EEG can have different causes and a given brain diseases can show more than one type of EEG brain pattern. EEGs are involved in many kinds of interesting studies about brain activity, but you do have to beware of some claims about their use as therapy.

I hope that you never require an EEG, but if you have any insights about EEGs or brain waves, please share them in the comments.

Find out if you can control your brain waves and learn more about how the body works in the BodyWorks gallery at Science World.