One cool fall day in Treaty 6 territory, Amy Cardinal Christianson, a Métis fire keeper and fire research scientist with the Canadian Forest Service, oversaw a cultural burn. Witnessing this with her young daughter on their family land while pregnant with her second child cemented the annual Fall burning as a family practice and an opportunity to teach her children how to use and respect fire.

Generations before the arrival of European settlers, Indigenous people cared for the land with fire. These controlled, low intensity burns were conducted at low-risk times, such as early spring or late fall, and performed on the understory—the plant life located between the forest canopy and forest floor.

Passed down through generations, cultural burning kept plants, animals and natural surroundings in harmony with each other and became a family-oriented activity where Elders and children could gather together.

But starting in the 1600s, settlers implemented what Amy describes as fire suppression as they moved across Canada. European settlers saw fire as destructive to the natural state of forests and prohibited Indigenous peoples from performing cultural burns. Notices were distributed across territories in Alberta and when people did burn, they were fined or jailed. Eventually, cultural burning was outlawed across Canada by the early to mid 1900s. 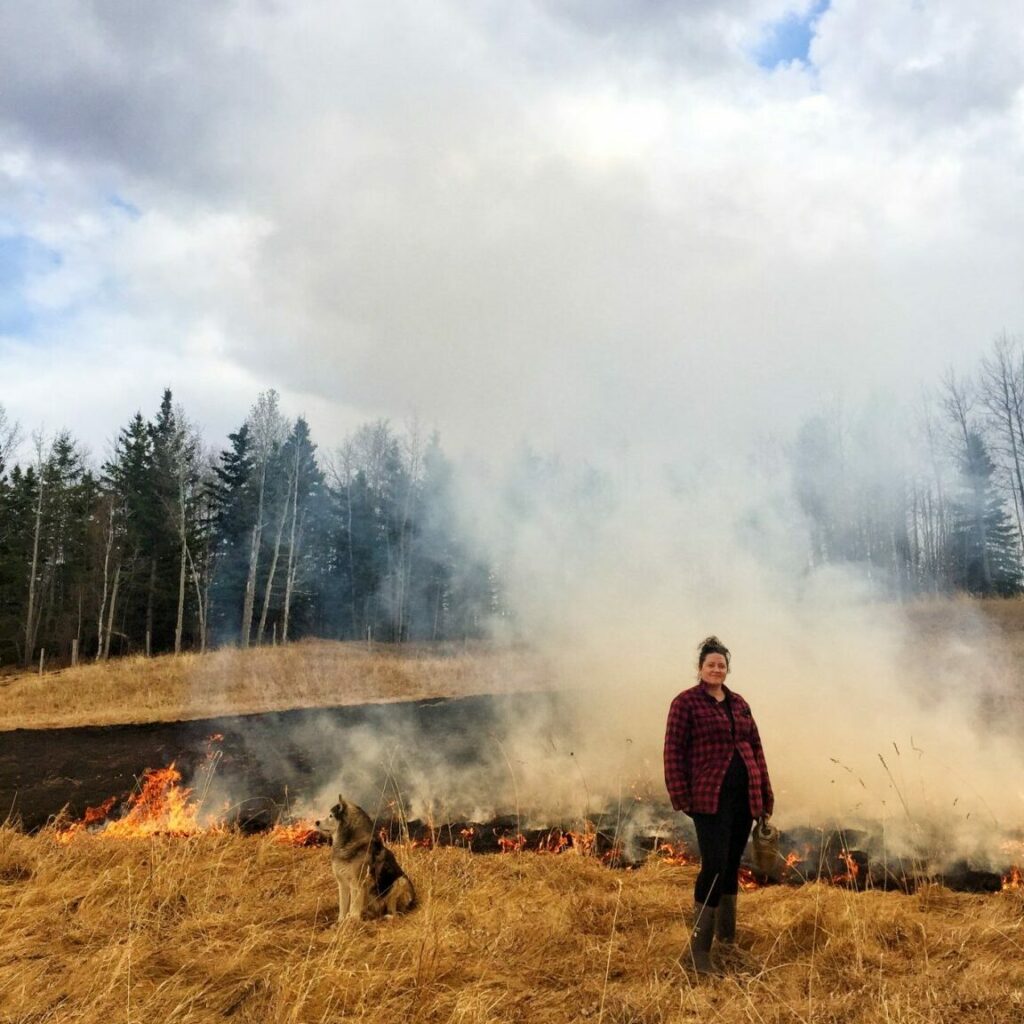 “I didn't grow up with cultural burning. Because of colonization, we had this disconnection from fire,” says Amy, who was raised in Treaty 8 territory in Alberta. “It was the Elders who taught me about good fires and how they can clean the land.”

Amy explains that cultural burning combats wildfires by removing the “fuel” on the ground such as dead grass, leaves, and trees. As a result, when a wildfire starts on a patch of land that’s been culturally burned, it naturally lowers in intensity. “That’s why when we burn, we say we’re cleaning up. We’re cleaning the forest; we’re cleaning the land.”

But reducing the intensity of wildfires is not the main goal of cultural burns. Cultural burns are used for cultural purposes such as encouraging the growth of plants that can be used as medicine. Amy shares that when Indigenous people perform a cultural burn, they have cultural objectives in mind.

In Treaty 6, cultural burns happen in the Spring and Fall seasons to increase the production of berries, support the growth of healthy grass, reduce pest populations and prevent trees like aspen and poplar from growing into meadows.

In communities where hunting is culturally significant, a cultural burn might be performed to replace dead grass with new grass which attracts moose and makes it easier for them to move around. In communities that rely on fishing, a cultural burn might be performed near the riverbanks to open up the streams or create smoke inversions to cool the temperature in the water.

Amy notes that while there has been recent interest in the practice of cultural burning from Western scientists and government agencies, there are still laws that restrict Indigenous peoples from performing cultural burns in the ways it was performed by their families for generations.

Although Indigenous peoples can burn on their reserves in some communities, they often cannot burn in the surrounding areas because those areas are designated as Crown land. As Amy observes, these laws act as barriers and keep Indigenous people from being the decision-makers.

“There is still the question of who holds the power and who decides where and when fires occur. Right now, that power is in the hands of various [fire management] agencies,” she says. In order to respectfully revitalize cultural burning, Amy says that Indigenous people need to be recognized as the knowledge holders of this practice.

Cultural burning requires an intimate understanding of your natural surroundings and Indigenous people look for cultural indicators, like the plumpness of spruce needles, to determine whether it is the right time to start a cultural burn. Because they have interacted with the same environment for years, they know which cues to look for in the weather patterns, the soil or the plant life.

But getting a cultural burn approved can take six months to a year. This process puts a strain on the Indigenous fire keepers who make decisions on when to ignite a fire based on their current observations.

“It's good for Indigenous peoples to inform agencies about cultural burning practices but it's a totally different thing when they are empowered to go on their territories and burn in their own ways,” Amy emphasizes.

Through the Revitalizing Traditional Burning project, Amy was able to work with these First Nations and FNESS to use Indigenous-informed research methods to create burn plans for the communities and address climate change issues, including wildfires and drought.

Amy’s hope is to see more projects like these that incorporate Indigenous ways of being on a larger scale, across communities in Canada, and give autonomy to Indigenous peoples to practice cultural burning.

She is currently recording season two of her podcast, Good Fire—a podcast aimed at increasing public knowledge about fire in an easily accessible way—and is excited because this upcoming season shines a light on Indigenous fire practitioners on the ground, including Indigenous wildland firefighters, a group Amy says often goes unrecognized.

“Fire is a gift and we can use it in good ways,” she says. “I’m just glad I get to reclaim this (cultural burning) and have my children present with us when we burn so we can continue to pass that knowledge on.”

Read about the amazing work of Indigenous STEAM experts, from doctors leading us through the COVID-19 vaccine rollout in Canada to climate scientists collecting data on thinning sea ice.