Attitudes are certainly changing about tattoos and the people that love them. While in the past, this aesthetic, cultural or ceremonial form of body art has been associated with criminal and sinister lifestyles. In recent history, a more open-minded perception of tattoos as a respectable form of self-expression has become more common.

However, studies between 2000 and 2012 have shown that there are still negative stereotypes attached to people with tattoos, and despite the increase in tattoos among younger generations, tattooed individuals still face discrimination and negative stigma.

Not surprisingly, this stigma it likely to be completely unwarranted. There is evidence to suggest that these stereotypes are not only discriminatory, they are perhaps completely off base. A study, completed by German scientists in 2007, using the Big Five Personality test, found that tattooed individuals scored higher on the subscale of extraversion and lower on the subscale of neuroticism.[i] These findings indicate that tattooed employees may be better employees than previously believed, as extraversion has been found to be an indicator for high job performance.

So why are tattoos so popular?

Tattoos can symbolize a life story. In some cases, tattoos help process traumatic life events, like loss of a family member or close friend.

It can also be a personal adventure. Researchers around the world who study human behaviors have been interested in finding out what makes people modify their body. They have found that individuals with tattoos report that they feel more attractive, stronger and more self-confident—having overcome the fear of pain.[ii] For some, tattoos seem to go deeper than just underneath the skin, creating a deep personal change, which makes him or her mentally stronger.

How does the tattoo process work?

The technology of tattooing has gone from needles made out of bones or sticks to modern machines using a motor to move multiple needles for lining or shading. The first modern tattooing machine was modeled after Thomas Edison’s engraving machine for metal.

How the machine works is, the ink is held in between multiple needle points using capillary action. The needles puncture the skin 50 to 3000 times a minute. The ink is then inserted into the dermis, the middle layer of your skin. If ink was to be deposited into the epidermis, the outermost layer, the tattoo would simply shed away with the millions of skin cells we desquamate every day. 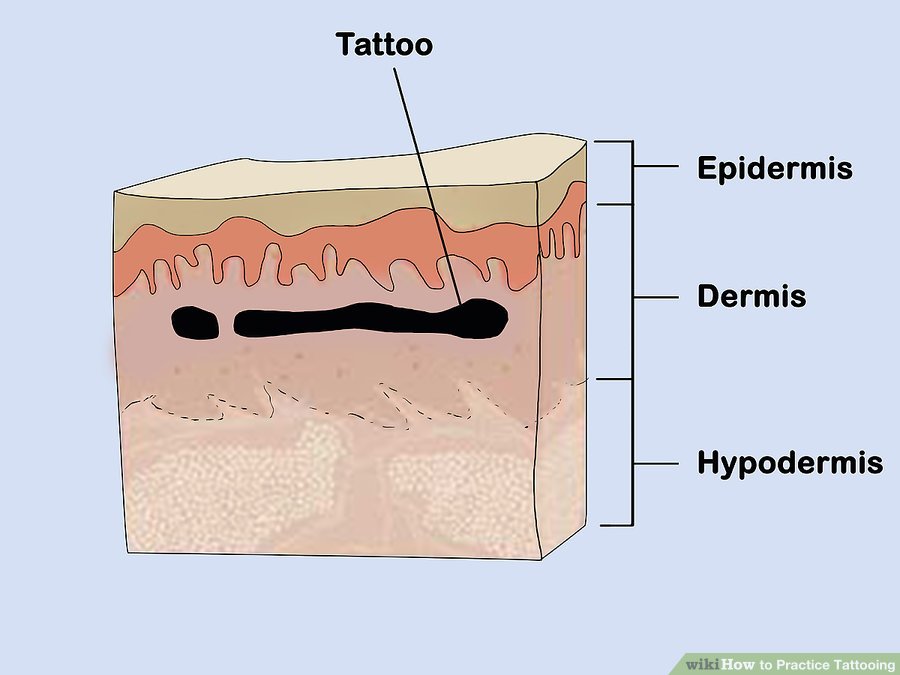 Once the ink enters the dermis, you body responds! Your immune system senses the pigment particles as foreign bodies and macrophages are send to the wound to absorb the invading ink particles in an attempt to clean up the inflammation site. Some of the macrophages carry the ink particles through the lymphatic system to the lymph nodes where they are disposed of, whiles others remain in the dermis permanently.

Some of the particles are suspended in the gel-like matrix of the dermis, while others are swallowed by fibroblasts, a type of tissue cell. This is how the ink remains permanently in your skin. During the process some ink is deposited into the epidermis, as the skin heals the damaged epidermal cells are shed, peeling off like a sunburn, which leaves an ink-free, transparent epidermis and the deposited ink in the dermis, visible.

Tattoos are considered permanent, but over time, tattoos fade naturally as the body continues to break down the foreign ink particles. UV radiation emitted from the sun also works to fade tattoos.

Some people say yes and others claim that they feel little pain. It doesn’t matter if you think it hurts or not, your body considers the pain a form of trauma and goes into fight or flight response, which activates your sympathetic nervous system. This results in a rush of adrenaline and the release of endorphins, your body’s natural pain relievers. The effect can make you feel intense and relaxed at the same time and lasts for about 2 to 3 hours, depending on the individual.

Want to learn more about the human body? Come by and check out the new Body Works gallery, opening in the end of June 2017.

TATTOOING Close Up (in Slow Motion) – Smarter Every Day 122: https://www.youtube.com/watch?v=kxLoycj4pJY