As mammals go, whales are some of the most spectacular. They capture the hearts of people all over the world with their appearance, intelligence and, above all, the size they can reach. Baleen whales are especially massive. For example, the blue whale can reach lengths in excess of 100 feet, and is the heaviest known animal, ever.

New research published in the Proceedings of the Royal Society B has recently added to a flurry of interest about the evolution in size of baleen whales. The questions on everyone's lips is, why and how did whales get to be as big as they are now?

From Land to Sea

Whales belong to the order Cetartiodactyla, from the words cetacean meaning whale, and artiodactyl, meaning even-toed ungulates—like pigs, deer, camels and hippopotamuses. This might sound like strange fellows for a sea-faring mammal! Considering their origins, however, it isn't that weird. In fact, the first known cetacean in the fossil record doesn't look like a whale at all. 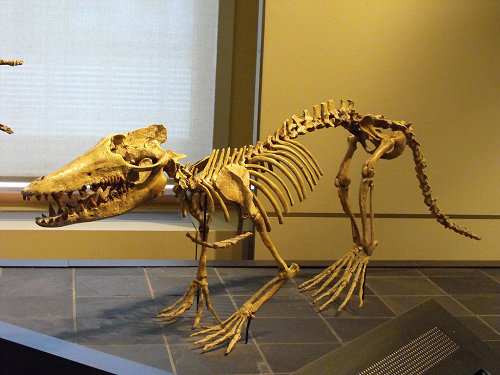 Fossil mount of Pakicetus, considered the most basal of all whales, from the Royal Ontario Museum.

Meet Pakicetus, aka the "whale of Pakistan". Scientists have identified a number of interesting structures that indicate Pakicetus is the first cetacean. Its leg bones are denser than you would expect for a land mammal, suggesting that they acted as ballast while in the water; its eyes are also placed unusually high on its head, like an animal that can peek above the water while submerged. Most indicative of all, however, are structures in its inner ear that would have helped it to hear underwater and—only whales have this structure today. This is where the story of whales begins, with an amphibious mammal no larger than a dog.

Over the next 15 millions years, descendants of the line of Pakicetus became more and more aquatic, with their limbs slowly transforming into flippers. Eventually, some time between 30 and 35 millions years before today, basal baleen whales, Mysticetes, first appeared and this is where our focus for giant whales lies. (Toothed whales can get fairly large as well, but not so big as the baleen whales!)

Here's where it gets wrinkly. Whales haven't always been as massive as they are today. Prehistoric whales averaged about 20 feet long, or just above 6 meters. Today's whales are, on average, more than twice as large. Of the 14 species of baleen whale that live today, only two or three are 20-30 feet long. Somewhere between 35 million years ago and now, whales exploded in size as a group.

Whale biologists have thought of many potential reasons why this happened. For one thing, in evolution, a group of animals that survives and evolves for a long time tends to get larger and larger over that period. While it doesn't happen with every group, it is such a common theme that evolutionary biologists have called it Cope's rule, after the famed paleontologist Edward Cope who often saw patterns like these happen over evolutionary time.

The recent research by Graham Slater, Jeremy Goldbogen, and Nicholas Pyenson analyzed dozens of baleen whale fossils. They observed their evolutionary history and combined their observations with oceanographical knowledge and mathematical models to figure out if there was a sudden change in baleen whale body size, as well as when it happened.

Overall, the data showed that between 35 and 3 million years ago, a whales' average body size varied somewhat randomly, with some individuals growing larger and some growing smaller based on local ecology and their own genes. However, 3 million years ago, the trend of change started moving towards larger body sizes for nearly all groups. In other words, the somewhat random process of changing body size in baleen whales suddenly gained a direction, and that direction was up!

The researchers also found that the timing of that evolution corresponded to a big change in the distribution of food worldwide. Around the time the baleen whales started to become gigantic, upwelling of deep, nutrient-rich water became much stronger along the coastlines of the world. That boost in coastal nutrients meant more photosynthetic algae, and in turn, small animals like krill, herring and sardines became much more concentrated there. For whales, that's a lot of places where food is very dense, but each patch is a long distance from the next one. 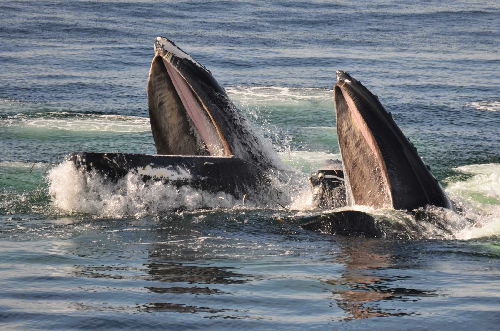 This story fits well with our knowledge of how these giants take advantage of resources. Today's baleen whales are often migratory, taking long trips between patches of food, then sticking around to eat from the rich buffet as long as possible before moving on to the next one. This also may explain why different groups of baleen whales all grew to massive size independently. After all, a blue whale can gulp down over half a million calories in a single lunge! That's an efficient way to eat for a giant.

The story of whales from an amphibious, four-legged animal to the mighty giants of today is a fascinating one that continues to tug at the minds of researchers and kids alike. This new research adds another piece to the puzzle, and may even help us understand or predict how whales and other large animals will be affected by our changing world in the future.

Still curious about giant animals, read this one: How Did Dinosaurs Get So Big?! Or Catch these giant creatures on the Giant Screen. Wonders of the Artic is now playing in our OMNIMAX® theatre.