On April 24, 1990, the Hubble Space Telescope was launched to explore and observe distant galaxies and report its findings back to Earth. For the last 25 years, Hubble has collected some of the most important images of the Universe that we’ve ever seen.

Before Hubble, the geography of space was left to the imagination and to scientific theory. When NASA first imagined the capabilities of a technological achievement like the Hubble Space Telescope, they had hoped that it would send back some answers—and it has.

Hubble has no limit as to how far it can see, but the Universe does. The Big Bang theory tells us that the Universe is around 13.7 billion years old. Hubble has taken images of galaxies approximately 13.3 billion light years from Earth. Looking this far back helps us discover what the Universe was like at the very beginning of time.

But how does it work? The Hubble Space Telescope is a reflector telescope; it uses mirrors instead of lenses. As a general rule, lenses are better at focusing light and giving a sharper image, but mirrors can gather a lot of light, allowing us to detect very faint objects. The larger the mirror, the deeper into space you can see. Hubble actually has two mirrors. Light travels in through an open hole and hits the primary mirror. It then bounces off that mirror and onto the secondary mirror where it bounces again and travels in a straight line through a hole in the centre of the primary mirror to the “eye” of the telescope. From here, the image can be processed through multiple instruments on board the Hubble Space Telescope.

Hubble also needs to be able to detect many different types of light. The Hubble Deep Field images were taken using a long exposure over a period of about 7–10 days, in visible, ultraviolet and infrared wavelengths. The results were spectacular! Nearly 3,000 galaxies were seen in a patch of sky around the size of a dime, held at arm’s length. Every speck of light you see in this image is a galaxy—some of them almost 13.3 billion years old!

But Hubble has contributed more than images to astronomy. The Hubble Space Telescope was named after Edwin Hubble, a famous astronomer, who discovered that the Universe is expanding. This discovery made it difficult to pinpoint the age of the Universe; predictions ranged from 10 to 20 billion years old. Thanks to the sharp optics of Hubble, scientists were able to detect a very helpful type of star called a Cepheid variable. These stars are thousands of times brighter than our Sun. If you can detect one of these and measure how its brightness changes, then you can deduce the distance to its host galaxy. This method helped to determine the current expansion rate and thereby narrow the age approximation of the Universe to the most accurate that it's ever been. 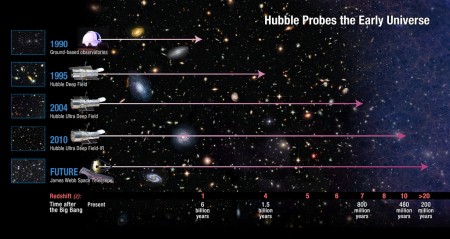 We are now celebrating Hubble’s 25th year in orbit. Originally, the Hubble Space Telescope was predicted to last for approximately 15 years, but now, 10 years past its “sell by date,” it’s still going strong. However, all good things must come to an end. Hubble will have to return to Earth at some point. On the last servicing mission, astronauts attached a ring, known as the Soft Capture Mechanism, to the back end of the spacecraft. This ring will give future robotic spacecraft an easy place to grab onto when it’s time to bring Hubble home.

So what will we do when Hubble is gone? Luckily, Hubble has a successor—the James Webb Space Telescope. Due to launch in October 2018, this telescope will let us see even further into space than Hubble and with even clearer images. Who knows what we will discover next?

Come down to Science World at TELUS World of Science and celebrate the Hubble Space Telescope's 25th anniversary, with a special screening of our OMNIMAX© movie, Hubble at 5pm on Saturday, April 25 and Sunday, April 26.