Androgyny is big in music. The legacy of yesterday’s gender-bending artists like David Bowie, Annie Lennox and Freddie Mercury is proudly carried on today by modern counterparts like Lady Gaga, Marilyn Manson, and Adam Lambert. However, the cross-dressing ability of these stars pales in comparison to the accidental gender mixing that happens in nature to animals called Gynandromorphs (which would also be an awesome band name).

You may have noticed that there is a difference in how males and females of many animal species look and/or act. This is called sexual dimorphism. Humans are a great example: men and women have very different body types, and, as any stand-up comedian can tell you, men and women are different. It’s helpful for animals to have the visual ability to distinguish their mates (sexual partners) from their mates (Australian friends), so as not to waste energy putting their files in the wrong cabinet. Some animals make this very difficult.

Gynandromorphs (pronounced gin-nandro-morph) are animals with both male and female physical characteristics covering their entire body (different from hermaphrodites, who only have both gender’s reproductive organs). Here’s how gynandromorphy usually works: early in an animal’s development, chromosomes from the it’s parents are usually separated from themselves and then combined together (so you get half of mom’s genes and half of dad’s). This is called mitosis. In gynandromorphs, when the animal is only a few cells in size, the chromosomes aren’t evenly split and attached, so some cells mature as female and others as male. All of that internal mixing results in some sick* looking animals.

Get a Load of These Guys 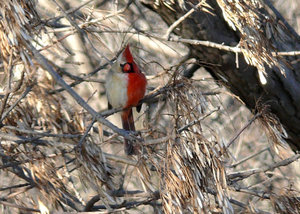 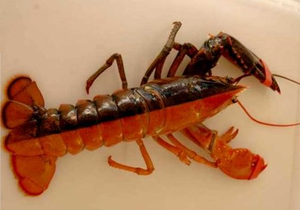 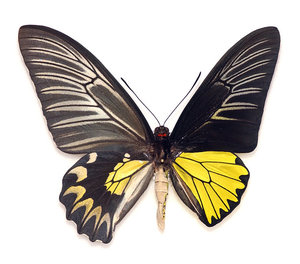 Pictured above are three examples of gynandromorphs. The cardinal and lobster are called bilateral gynandromorphs, where one half of the animal is male, and the other half is female. The butterfly is a mosaic gynandromorph, where male and female characteristics spread out in a more random fashion.

What if you were the cardinal gynandromorph above? Other cardinals wouldn’t be able to distinguish if you were a potential mate or a potential territorial threat, the confusion causing them to do this. It’s easy to see why natural selection hasn’t fully capitalized on gynandromorphy in the animal world. Life would be too confusing.

Gynandromorphism mostly happens in the insect world, but birds are susceptible too, as seen in the cardinal above and this chicken, but no cases have been found in large mammals (like humans) yet. Our sexual reproductive systems are too complex for gynandromorphism. Also, it doesn't work if you and somebody from the opposite gender run into each other really fast. Take my word for it.

Finished reading about animals? Learn about bulletproof coffee or how sound works and more on the Science World Blog!