We all go through a dinosaur phase at some point. Ask any child on the street to name a dinosaur, and they’ll most likely be able to rattle off a laundry list of Latin-labeled lizards. Giant reptiles are certainly worthy of our retrospective reverence, but in our haste to move our childhood obsession to Pokémon or Gameboys or whatever kids are on about these days, many of us may have missed out on a whole other world of super-sized animals: Megafauna.

When the last of the non-avian (non-birdlike) dinosaurs died out 65 million years ago, their absence left an evolutionary opening for a completely different sect of animals to grow into their space—mammals. Really big mammals. Giant mammals, or megafauna, were a wildly diverse group densely populating almost every continent on the planet.

You may already be familiar with megafauna like the Saber-Toothed Cat and the Woolly Mammoth, so let’s take a look at a few you might not know as well (and then we’ll talk about how most of them didn’t make it):

Artists' recreation of two dire wolvesÂ fighting over a the corpse of aÂ sabre-toothed cat. 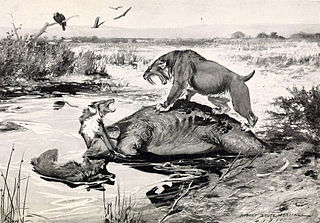 Artist's recreation of a Scott's horse. 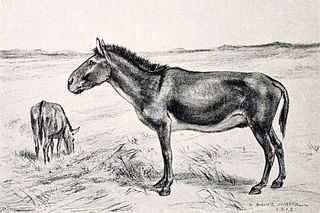 The dire wolf (Canis dirus), the giant beaver (Castoroides) and the short-faced bear (Arctodus simus) are all intimidating examples of giant mammals, but they make up only a small percentage of North America's megafauna. Families of large cats, bison and horses also occupied the landscape, including Scott's horse (Equus scotti), pictured above. There isn't anything especially significant about Scott's horse, it just seemed important to note for anybody reading this article named Scott—there used to be a horse out there just for them. 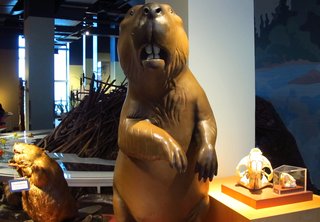 Artists' recreation of the "long llama" (Macrauchenia) hanging out. 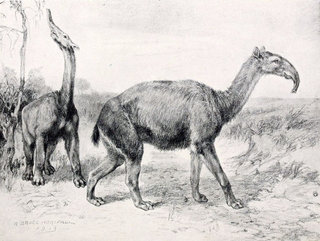 Artist's recreation of the giant sloth (Megatherium) munching on some grindage. 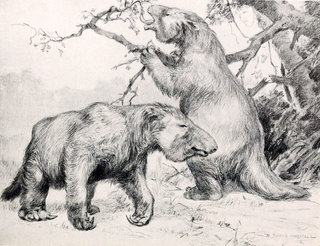 The Americas shared many of the same types of animals due to geographical proximity. Sloths, for instance, could be found in both continents, although South America boasted the biggest in the world. The elephant-sized Megatherium ground sloth would've dwarfed its modern day counterpart (4,000 kilograms vs 8 kilograms), but likely maintained a similar diet of rough vegetation. That's a lot of salad.

South America also featured a bevy of ungulates (or hoofed mammals) such as Macrauchenia or the "long llama". This floppy-nosed fellow had the distinction of being first discovered by Charles Darwin in 1834 off the coast of Patagonia (Argentina today). The ten-foot tall Macrauchenia also had nostrils on the top of it's head—for unknown reasons. Darwin is also among the first discoverers of the ancient-looking Glyptodon, a relative of the equally ancient-looking armadillo. Although likely not as fast as one, the Glyptodon was about as big as an '89 Dodge Ram van.

"All things must come to an end" Geoffrey Chaucer once wrote in a completely difference context, but the majority of megafauna nonetheless did eventually die out about 11,000 years ago. This period, dubbed the "Quarternary extinction event," ended the existence of hundreds of extremely diverse megafauna across the entire globe.

I am focusing on the Americas here here, but Eurasia and Australia too once teemed with massive game. What happened to the megafauna is a real mystery and scientists and anthropologists can't agree on the ultimate cause of extinction. Some believe a significant change in climate may have disastrously affected megafauna food supply and living conditions. Others blame the boom of migrating humans, either for bringing their infectious diseases or hunting too much (the "overkill" hypothesis). If these ancient hunters accused of "overkilling" megafauna were alive today, they may have to look in the mirror and ask themselves The Urkel Question.

This story does not have an unhappy ending, however (unlike Old Yeller), because there are still megafauna stomping around today! The continent of Africa houses a wide range of biodiverse megafauna you are probably familiar with: gorillas, giraffes, rhinoceros', zebras and the biggest land animal on the entire Earth, the African Elephant. No matter which of the Quaternary extinction theories are true, humans are now well aware of the effects we can have on the planet, positive and negative. Until we can teach animals to do this to poachers, pollution and other threats to their survival, humans will have to protect and watch out for the well-being our massive mammal pals.

Want to learn more about animals? Learn about dogs, nudibranchs, animal labour and more on our Science World Blog!