Ingrid Lae, Science World’s Manager, Theatre Operations and Programming, was supposed to be at the Grauman Egyptian Theatre in Hollywood, California this weekend, at a classic film festival she attends every year.

This historic theatre is one the few that can screen 35mm nitrate film, a highly flammable material notorious for causing disastrous theatre fires in the early days of cinema.

“There’s something very special about this archival stock that makes it look more vibrant,” Ingrid says.

Her passion for the history of film technology and rare formats began 40 years ago as a barista at the Ridge Theatre.

At 20, she delivered cappuccinos to the projectionist at The Ridge during intermission. She doesn’t remember what film was playing the first time she stepped into the booth. It could have been Curtiz’s Casablanca, Truffaut’s Small Change, or Lynch’s Eraserhead. What struck her instead was the fascinating equipment.

“I wanted to know how everything worked. I liked learning how to take care of all the different components and the film, of course.”

She started training to become a projectionist right away, a 1,000 hour apprenticeship that inspired her to make weekend trips to Seattle to catch films from across the border.

The Ridge Theatre in 2013 before demolition. (Photo by Adam Hogarth, The Globe and Mail) 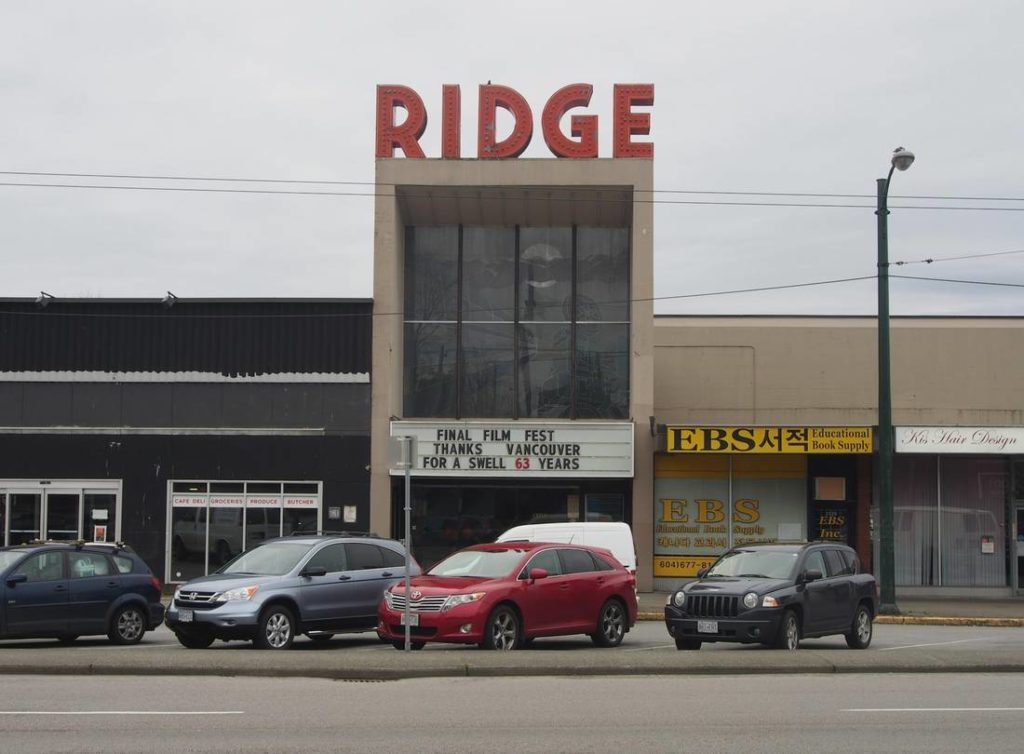 It was there, at the Pacific Science Centre, that she saw her first IMAX film, Speed. In that moment, she understood the transformative power of giant screen theatre.

“The quality was so sharp, bright and clear. The images jumped out at me…It made me see the world differently.”

Ingrid dreamed of operating an IMAX projector herself.

Today, Ingrid looks back on the barriers she faced in achieving this dream. After completing her apprenticeship in 1983, a member of BC’s fire commissioner administered her test. “He flunked me,” Ingrid says, “and I had to wait some time to retake it.”

A different person administered her second test, and she passed easily. Ingrid later heard stories about the reluctance of some to grant women the accreditation.

Ingrid became the first woman projectionist with a first class licence in BC. 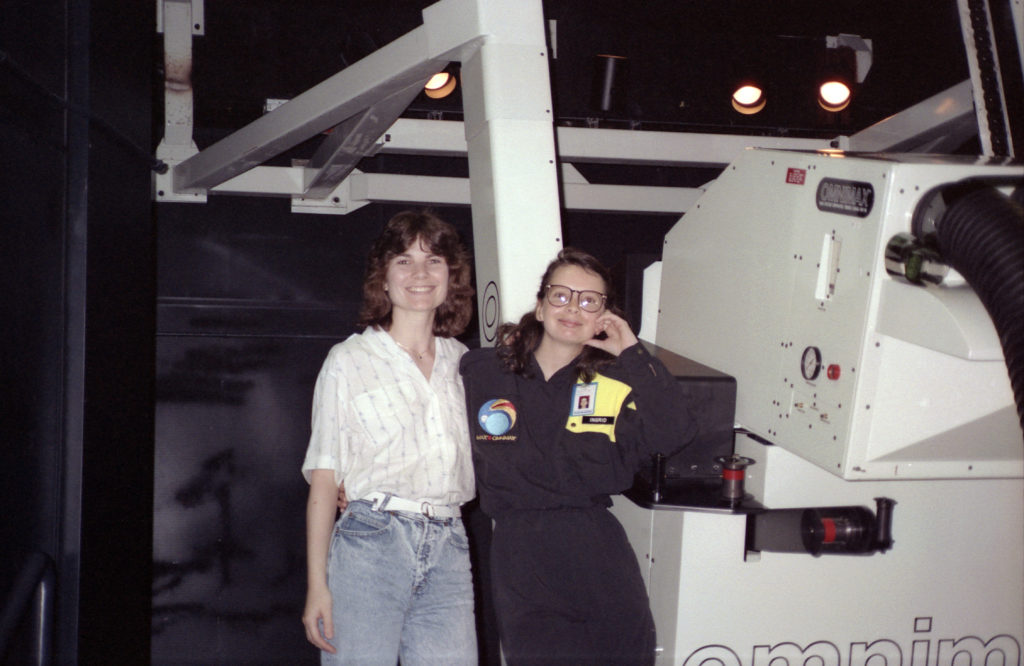 As Science World's Theatre Manager, she programs both the OMNIMAX and Science Theatre, selecting films that align with Science World exhibitions and that appeal to a wide variety of audiences.

She also gets to work with producers from “the idea stage,” and has been involved with the development of several films including 2 that Science World is currently offering online for free: Dinosaurs Alive! and Mummies.

Since our closure, Ingrid has been working hard to continue providing high-quality programming to support families across BC. She is grateful for generous partners, Giant Screen Films and British Columbia's Knowledge Network, who help us deliver free films that are entertaining and informative.

Other film distributors have also helped out by providing film-related content, such as a live video chat with Henry, one of the four-footed stars of Superpower Dogs, aided by his human sidekick.

Ingrid says that while nothing can replace the experience of the huge screen and sound system in Science World’s OMNIMAX theatre, delivering new ideas to people of all ages has always been the best part of her job.

“You might not have the chance to ever experience space travel. Or visit a country on the other side of the world. But you can still see it. You can hear it. And you can learn something.”

Science World's Brian Anderson, Carla Bitter, and NASA astronaut John Herrington at the premiere of Into Nature's Wild 2 weeks before we closed. (Photo by Albert Law) 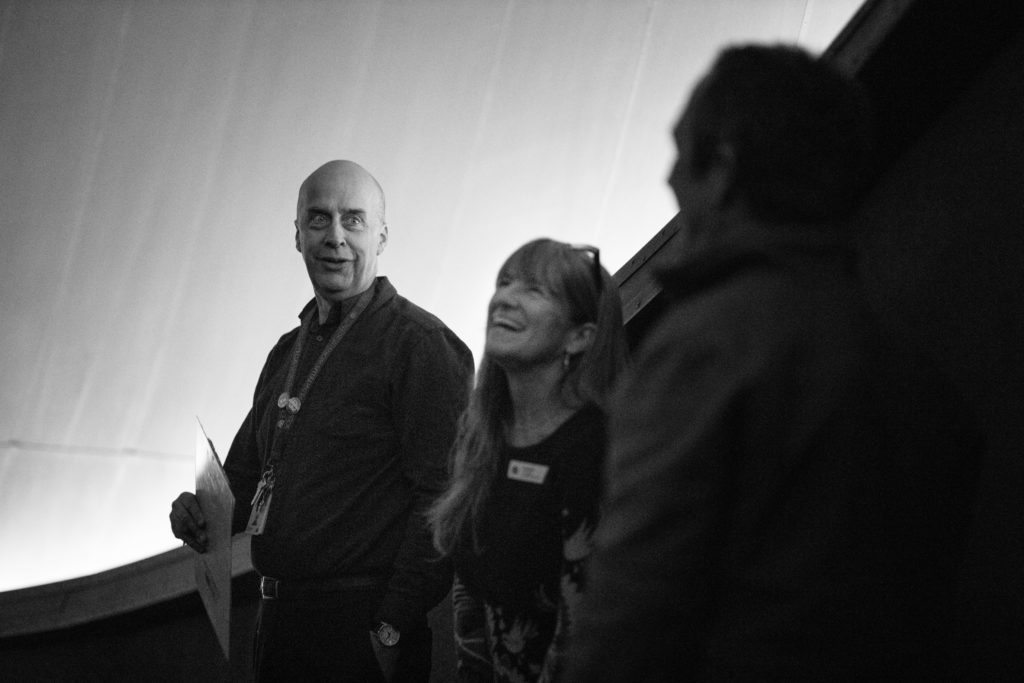 Check out the eleven films we are offering online for free thanks to our partners Giant Screen Films and British Columbia's Knowledge Network.

Tell your friends and family about the work Science World continues to do to support science literacy across the province.

We Need Your Help.

Science World continues to offer free programming online for families across BC, but our closure is a financial crisis for us as a charity. Our future is uncertain. If you can, please donate today so we can re-open tomorrow.

Our Dome Is Closed But Our Lines Are Open

Science World’s Chickens in a Home Away from Dome

Take Me to School: How Science World Continues to Serve Teachers