Many people have heard of the famous thought experiment ‘Schrödinger’s cat’. But what is it exactly?

Schrödinger’s cat is a scientific thought experiment. Thought experiments come in handy in science when they allow us to use reason and deduction to figure out things we can’t physically do. An example of a thought experiment would be to ponder what would happen to the Earth if we suddenly took away the Sun. Obviously we can’t do that in reality, but we can imagine it and model the outcome.

Disclaimer: before we dwelve into Schrödinger’s thought experiment: no cats were harmed during this experiment or this blog!

To understand the Schrödinger’s cat experiment, we first need to understand the idea of superposition. Superposition is a fundamental property in quantum mechanics that says that if certain configurations are possible for a quantum object, then we need to consider all those possibilities* together. For example, if these configurations represent different positions, superposition is often interpreted as “the quantum object behaving as if it is in multiple places at once”. But a quantum object can only be in superposition as long as nothing measures or disturbs it. Otherwise, the superposition will randomly “collapse” to one of the configurations. This contradicts the core principles of classical physics, which postulate that if we know enough about a particle we can predict exactly what it will do in the future. Despite the intuitive absurdity of something behaving as if it were in two places at once, this is what the mathematics of quantum mechanics suggests at the level of electrons, photons, neutrons, molecules and other subatomic particles.

The probabilistic nature of quantum theory is a direct consequence of superposition. We can use math to predict where a quantum object might be at any point in time, but the answer we get is in the form of a probability. For example, if the possibility* to find a quantum object in points A, B and C is equally likely, then we will find it in either of these positions only 1/3 of the time. In other words, we cannot be certain the quantum object will definitely be in a specific position.

Here's how the experiment works: 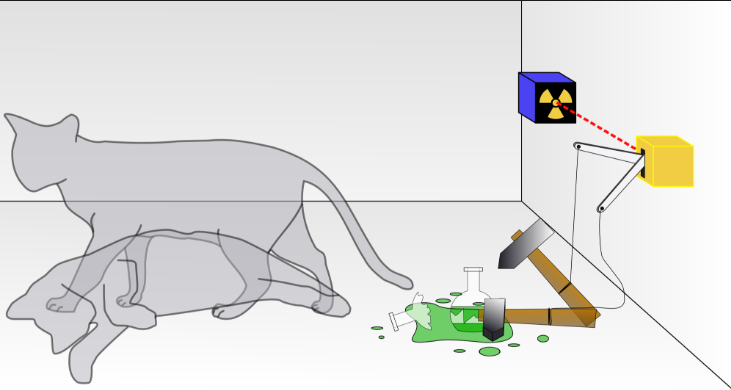 Imagine we have a box. Inside this box is a cat, a vial of poison, a vial of radioactive material and a Geiger counter with a hammer attached. Radioactive decay is where an unstable atom emits a smaller particle. This is a purely random process, meaning that we cannot predict exactly when this will happen. However, we do know the rate at which certain atoms decay and so in this experiment we would put enough atoms in the vial so that there is exactly a 50/50 chance that one of the atoms will decay within a certain period of time and emit a particle. If a particle is emitted, the Geiger counter will detect it and the hammer will drop on the vial of poison killing the cat. The argument goes: until we open the box to find out if the hammer dropped on the vial of poison or not, the cat is in a state of superposition: it is both alive and dead at the same time.

Maybe these examples of interpretations leave you puzzled and you think that we can never know what is really going on between the moment we decide to open the box and the moment we look inside the box. Many scientists believe that this is the case: we can mathematically talk about what will happen to the cat, yet we cannot make a mental picture of why this is happening. This is what is known as the Copenhagen interpretation.

It’s important to know that despite of the interpretation you choose to believe, all interpretations predict the same results. We have a very clear, complete and accurate mathematical framework of what is going on. Yet, many of us are interested to know the “why”, so Schrödinger’s is still used today as food for thought.

Footnote: *In fact, these “possibilities” we are talking about are not like the percentage probabilities you are used to; they are far more interesting than that! (Hint: they can be negative!) We’ll speak more about these possibilities in the post about superposition.

Dig Deeper into Quantum information at Quantum: The Exhibition, on now until February 26th at TELUS World of Science. You may begin to question everything you thought you knew about the laws of physics.