Three years ago, thanks to some extraordinary luck, I was hired as the Barbara Brink Intern at Science World at TELUS World of Science. I worked as a science facilitator and I also worked on assigned projects in the Community Engagement office. I helped to promote the Future Science Leaders, updated the Science World website and helped to repair the bionic cyclist, Pneuman, who has become an icon at Science World.

At the time, the building was undergoing extensive renovations, which made it both a challenge and a fun time to work at Science World. On one occasion, halfway through the internship, there was a scheduling mistake and I was the only one available to fill in at the OMNIMAX® Theatre. I got a 30-second, crash course, over the phone, on what all the theatre buttons did and when to tell the projectionist to start rolling the film. In hindsight, it wasn’t too difficult, but it was nerve racking to think that 300 people might not be able to watch their movie if I made a mistake, but everything worked out.

I think all the past interns would agree that the summer seemed to end in a heartbeat, but despite how short it was, it was a fantastic opportunity and I am so glad I got the chance to do it. 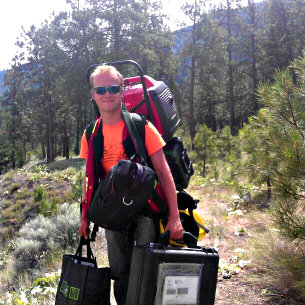 Soon after finishing at Science World, I flew to Ontario to start an engineering degree at Queen’s University in Kingston. I had picked a university that I had never visited before, in a province that I had only been to once. I made the decision based almost purely on the testimony of friends who told me Queen’s was awesome.

If there was ever a moment that I questioned my decision, it would have been during moving day. It was late and I was completely on my own, with no knowledge of where my residence building was or how to get there with my three big bags (where are smartphone batteries when you need them?). Luckily, the first person I saw getting off the bus was the friend who convinced me to come to Queen’s. With his help, I found my building and never regretted my choice.

I had originally been drawn to robotics and a career in mechanical engineering, but I became surprisingly fascinated by a course I took on geology for engineers. I have since chosen a geotechnical engineering program and my current ambition is to work in tunnelling and railway/rapid transit construction.

Since the Barbara Brink Internship, I have been fortunate to find work that is relevant and interesting to me. In 2012, I had a co-op position at a Vancouver company that makes high-efficiency gas boilers. In the summer of 2013, I worked for my department at Queen’s on a rockfall research project. The research involved the 3D scanning of several slopes in BC on a regular basis and comparing scans from different dates to view the changes. I’ll be honest, my main role was to carry the survey gear up and down hills, but the experience of being involved in academic research was incredibly stimulating and has encouraged me towards the (slightly daunting) prospect of considering a postgraduate degree.

I am currently in Northern England on a year-long exchange program for my third year of university. I have had a fantastic time here, so far, making new friends and exploring the possibility of working in England when I graduate—which is (scary and) only slightly more than a year away now. I still have some travelling to do before then, though!

Do you know a High School student that might be the perfect fit as our Barbara Brink Intern?