While walking my dog (I realize many of my posts start this way), I noticed hanging among the leafless branches of an old cherry tree, a mossy Christmas stocking with a round golf ball-sized opening. I wondered what kind of nest it could be. 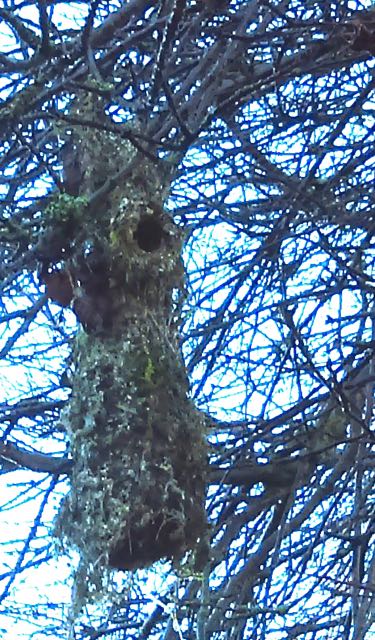 Some web searching for mossy hanging nests in Vancouver soon turned up the avian architect, Psaltriparus minimus, the bushtit. It is the only member of the Aegithalidae family this side of the pond. The rest make fancy nests in Asia and Europe.

The little, grey, fluffy, bushtit has a relatively long tail and a short beak. The Lower Mainland is the northern limit of its distribution, which spreads down through the western United States and into the highlands of Central America. They don't migrate, and from July to February, bushtits hang around in flocks of 5 to 25, consisting of several family groups. I think I may have seen them in my backyard, flitting between shrubs and trees and chattering to each other—feeding acrobatically on small insects and spiders.

Around February, they get down to business to form breed pairs and begin building nests together (see videos below), often with one or more helpers. Most of these helpers, also called supernumeraries, are unrelated adult males that had failed to produce a brood. Genetic tests have showed that the offspring only belong to the original pair, but if the female has a second brood, it will usually be with the helper.

Building a nest takes from two weeks to almost two months, depending on the weather. I was surprised those little birds have such perseverance. They begin by forming a ring between some twigs and then build a sac that hangs down from that. Later, they build a roof over top and fill in the sides to make a new opening. The roof keeps the opening in shadow and less conspicuous.

The pair and any helpers use moss, lichen, grasses, feathers and spider webs. The moss and lichen were most apparent in the nest I saw—the greens and browns helped with camouflage when the leaves were gone. Spider webs are important for holding things together, especially in the neck of the nest. Bushtits line the inside of the nest with feathers. The bottom of the bowl of the nest can be several centimetres deep—as many as three hundred feathers have been found in one nest. No wonder it takes them so long to finish!

The females lay from four to ten, smooth white, jellybean sized eggs that only need to be incubated 40% of the day, I suppose because the nest is so cozy. Once the eggs hatch, parents take turns bringing the chicks food. Until they are ready to leave, the young birds all sleep together in the nest. Often the adult pair will reuse the nest for a second brood if it has not been torn apart by crows or other animals. But the nest usually does not last through the winter, so I was lucky to see the one I saw. It's an amazing story contained in that soggy bag of moss.

Have you ever seen a nest like this? Are you interested in honeycombs and living in a tree? Let us know, and make sure to visit the Search: Sara Stern Gallery, where you can hunker down in a beaver dam and imagine what it would be like to live in an ant nest in the ground.