140 million years ago, the dinosaurs ruled the earth. They dominated over other animals like lizards, snakes and rodents. Their habitat was giant forests of ferns, conifers and cycads all growing upon shifting continental plates. The oceans that filled the gaps between these plates were populated with Ammonites and fish that were hunted by great marine reptiles.

So what happened to these incredible creatures? Why aren’t there any pterodactyls at the park? How come no one goes raptor-back riding? We don’t really know for certain, but we have a theory.

When modern paleontology (dinosaur science) emerged as a field of study in the 17th and 18th centuries, the fossil records were not very complete. Over the years, scientists collected more and more information, which helped to paint a more complete picture of the age of the dinosaurs. What they discovered was shocking. According to carbon dating of fossils and rocks, it appeared that a lot of the dinosaurs went extinct at the same time. The hunt began to find out why.

Many theories were suggested, some of them more likely than others. They ranged from climate change, a meteor impact, volcanism, lowering sea levels, shifting continents, decimation by visiting aliens, widespread dinosaur wars and even evolving mammals eating enough of the dinosaurs' eggs to drive them to extinction.

In the 1970’s geologist Walter Alvarez, and his father Luis Alvarez, identified an unusual clay layer in the earth at the time period between the cretaceous period and the the Tertiary period. This boundary, now referred to as the KT boundary, contained 30% more of a metal called Iridium than normal. The only places that contained such high amounts of iridium, were in the Earth’s core and in Asteroids and meteors.

That leaves us with the meteor, but if a meteor impact was the culprit, scientists calculated the meteor would have to be at least 10 km wide. Where was the crater? 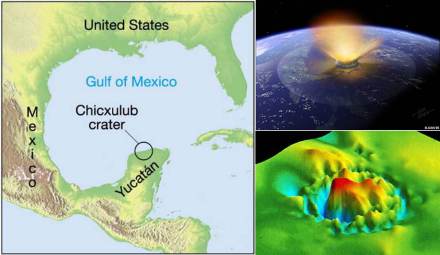 Then, in 1991, geologists discovered evidence for a huge crater at Chicxulub, on the Yucatan Peninsula in Mexico. The crater had since been buried by hundreds of layers of sediment, but surveys of magnetic and gravitational fields revealed that it has a circular shape. At 180 km across, and dated to 65 million years old, the crater is of the right size and age to have been caused by a 10 km-wide asteroid hitting Earth at the end of the Cretaceous Period. Also discovered at the site was shocked quartz and Tektites, both formed by the high impact and huge shockwaves that would have resulted from a meteor hitting the Earth.

The meteor would have caused an earthquake one thousand times greater than the largest ever recorded in human history. The massive fireball would have caused forest fires and nearby oceans to boil as it approached the Earth’s surface. The shockwave caused a Tsunami and flattened the surrounding forests. 90,000 cubic kilometres of debris were dispersed into the earth’s atmosphere, blocking the light from the sun. This would have caused a decrease in photosynthesis and a very long, cold winter.

It is still undecided whether this extinction could be called sudden. Was it the meteor impact or its effects that actually wiped out the dinosaurs? Whatever the reason, it has led us to uncover a huge amount of information about the Earth's history and its inhabitants.

Do you dream of a land before the Permian? Come down to TELUS World of Science to see our new feature exhibition, Ultimate Dinosaurs, and learn more about the dinosaurs of South America, Africa and Madagascar.