The Science World phone rang one quiet December day and Susan Burgess gave us this puzzling question: Why do pierogies (aka perogies) float when they’re cooked (but not when they’re frozen)?

Good Question! Science World’s kitchen science crew promptly put on some aprons and safety goggles and got busy in the lab with a pot of boiling water, a bag of frozen pierogies and some measuring devices.

Whether something floats or sinks depends on how heavy it is for its size—its density. If a pierogi has a density greater than the density of water, it will sink. If it’s less dense than water, it will float. It seemed to us that pierogies change density when cooked, so we started by measuring this effect.

We measured the mass and volume of the pierogies before and after we cooked them. Measuring the mass was easy; we have a pretty good digital scale in our chemistry storage room. Volume was a little trickier, because a pierogi does not have a uniform shape. We decided to drop the pierogi into a full-to-the-brim container of water and measure how much spilled out.

Density is straightforward to calculate—you just divide the mass by the volume. Cold water has a density of about 1g/ml; boiling water is a bit less dense (around 0.96g/ml). No surprise, frozen pierogies have a higher density than water, around 1.5g/ml, so they sink. 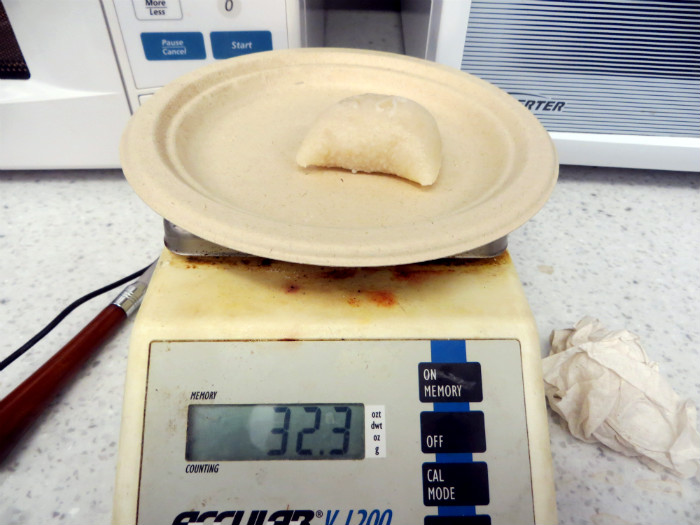 We dropped the frozen pierogies into boiling water and cooked them until they were floating and looked “done” (there’s room for a better scientific method here!). We patted the cooked pierogies dry and weighed them.

The pierogies each gained 3–4g during cooking. They also increased in volume by about 10ml each. The result is that the cooked pierogi is less dense than the raw one. The final density we calculated (around 1g/ml) is close to the density of water. That makes sense, since the cooked pierogies just barely float.

Now for the puzzler: presumably, the pierogies take in water and that’s what makes them get heavier. If a pierogi was like a sponge, the water would fill air pockets and the pierogi would get heavier without getting bigger. If the 3–4g of water filled up the inside of the pierogi like a water balloon, we’d expect the volume increase to be 3–4ml. But our pierogies were around 10ml bigger when cooked! What is going on?

A bit of reading in Harold McGee’s classic, On Food and Cooking revealed some of the chemical processes that happen when dough made from flour is cooked. First, at about 60 degrees Celsius, the starch granules in the dough gelatinize. In this process, the bonds between starch molecules break and the molecules combine with water to make a new substance, which causes the starch granules to swell. Second, at about 71 degrees Celsius, the gluten molecules in the dough align and form stiff bonds. So, neither a sponge nor a water balloon is a good model for a cooking pierogi. Instead, chemical reactions occur between starch, gluten and water. As the molecules rearrange to form new bonds, the dough becomes an entirely new substance with a different density.

Our pierogi experiments inspired a lot of speculation and further questions. How are frozen pierogies different from fresh ones? Do other kinds of filled pasta do the same thing? What about pasta that isn’t filled? Does it matter if the interior is potato/cheese or bacon/onion? Maybe you’d like to try a pierogi experiment of your own and tell us about it. If so, we highly recommend garnishing with sour cream and chives.

McGee, Harold. On Food and Cooking: The Science and Lore of the Kitchen. USA: Scribner, 1984