In the activities that follow, students explore balloon properties and their use in demonstrating various scientific concepts.

Most children have played with balloons, but few have thought about the chemical and physical concepts involved in balloon production and use.

A balloon can be defined as an inflatable flexible bag filled with a gas, such as helium, hydrogen, nitrous oxide, oxygen, or air. Modern balloons are made from materials such as rubber, latex, polychloroprene, metalized plastic or a nylon fabric.

Long before there was something as stretchy as rubber, balloons existed. In the pre-rubber era, balloons came from animal bladders. A pig’s bladder was inflated by Galileo in an experiment to measure the weight of air. Inflated animal bladders were used in play by Indian and Inuit children. Most of the bladders were from sea animals.

The Aztecs are thought to be the very first people in history to make ‘balloon animals’ out of the bowels of cats to be presented to the gods as a sacrifice. The bowels were carefully cleaned, turned inside out, and sewn with a special vegetable thread whose main property was that it stuck to itself when left to dry in the sun, and this produced an almost airtight seal. The bowels were then twisted and air was blown into them after each twist.

The first rubber balloons were made by Professor Michael Faraday in 1824 for use in his experiments with hydrogen, at the Royal Institution of Great Britain in London. Faraday made his balloons by cutting two round sheets of raw rubber, called caoutchouc (French word for rubber), laying them one on top of the other and pressing their edges together. The tacky rubber welded automatically, and the inside of the balloon was rubbed with flour to prevent the opposing surfaces joining together.

Toy balloons were introduced by rubber manufacturer Thomas Hancock the following year (1825) in the form of a do-it-yourself kit consisting of a bottle of rubber solution and a condensing syringe.

Vulcanized toy balloons, which were unaffected by changes in temperature, were first manufactured by J.G. Ingram of London in 1847 and can be regarded as the prototype of modern toy balloons.

In 1931, the Tillotson Rubber Company achieved another milestone in balloon technology: they created the first modern latex balloon made from the sap of a rubber tree. Before that, the balloon-making process was difficult and dangerous due to the use of solvent-dissolved rubber, similar to rubber cement. This new balloon, shaped like a cat’s head with pointed ears and a whisker-printed face, was also possibly the world’s first novelty-shaped and printed balloon.

The natural rubber latex used today comes from the sap of the rubber tree, Hevea Brasiliensis, which grows in Malaysia. This sap looks like milk and is exported in large ocean tanker ships. Once removed from the tree, the sap is called latex. To make this suitable for balloon production, curing agents, accelerators, oil, color, and water must be added. Next, the modified latex is put into an open tank, and the balloon mold, which is in the shape of a balloon, is dipped.

SAFETY: ALLERGY ALERT: Some people are violently allergic to latex, particularly people who work in health care, people with spina bifida, and those who have had multiple surgeries. 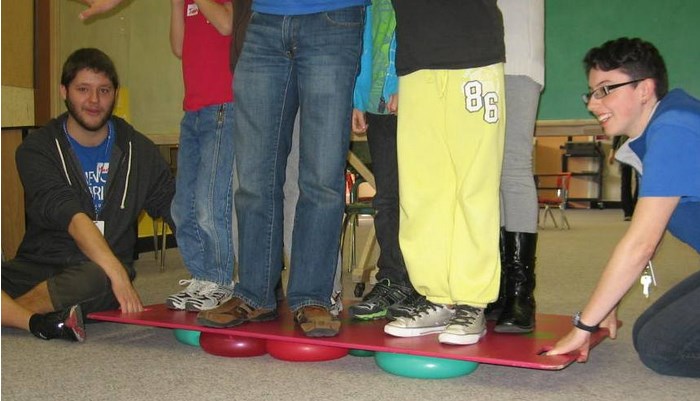 air pressure – The force of air particles against a surface.
atmospheric pressure – The air pressure of the Earth’s Atmosphere above a given point (i.e. the weight of the air pushing against you at a given point.
balloon – An inflatable flexible bag filled with a gas.
Bernoulli’s principle – The faster a fluid (air) flows, the less pressure it creates.
compress – To squeeze together.
conductor – A material which allows a flow of energy.
deflate – To collapse by releasing contained air or gas.
elasticity – The flexibility of an object; the ability of an object to return to its original size and shape after being stretched.
equilibrium – Occurs when forces (or influences) are balanced. “Balance” is a synonym.
fermentation – The anaerobic (without air) conversion of sugar to carbon dioxide and alcohol by yeasts, molds, and certain bacteria.
force – A push or pull that can cause an object with mass to change its velocity, direction, or shape.
friction – The force that slows things down when two surfaces are rubbed against each other.
fungus – Spore-producing organisms that feed on organic matter (including molds, yeast, and mushrooms). Plural: fungi.
heat capacity – The amount of energy needed to increase the temperature of a substance by 1°C.
ignite – To set on fire.
inflate – To fill (something) with air or gas to make it swell.
latex – Milky sap from certain plants that coagulates on exposure to air; used to make balloons.
polymer – A large molecule made up of chains or rings of linked (monomer) units.
suction – The creation of a partial vacuum, or region of low pressure. The pressure gradient between this region and the surrounding pressure will propel matter toward the low-pressure area.
vacuum – A volume of space that is empty of matter, including air.
yeast – Unicellular fungus used in bread baking and beer brewing.

How Products are Made | Balloon

Balloon in a Bottle

How Balloons are Manufactured