We may not realize it, and we can't always feel it with our senses, the air that surrounds us is exerting a huge amount of pressure on every square centimetre of our bodies.

At this very moment, we have the equivalent weight of a car pushing down on our heads. Do you see anything?

We are constantly surrounded by lots of tiny and invisible air particles. We often think of air as being something light and weightless. In reality, air is a gas that takes up space and has mass (weight). Since there is a lot of “empty” space between air molecules, air can be compressed to fit in a smaller volume.

Air not only has mass, but exerts pressure as well. The particles of air push in all directions and the force that is exerted is called air pressure.

To help us visualize air pressure, imagine that we’re living at the bottom of an ocean of air. At sea level, the air pressure is greater than on the top of a mountain since you have the weight of more air pushing down on you.

How heavy is that air?
A cube of air 1 metre per side has a mass of 1 kilogram. The Earth’s atmosphere is about 480 kilometres thick. This means that on the surface of the Earth, we have 480 kilometres of air pushing down on us. That’s 1,700 kilograms on each of our heads (which is roughly the equivalent of the weight of a male hippopotamus!).

So why don’t we get flattened by all that air pressure?
We have air and fluids inside your body that exert a pressure outward, cancelling out the atmospheric pressure around us. This ensures that our bodies do not collapse under the weight of the air around us. 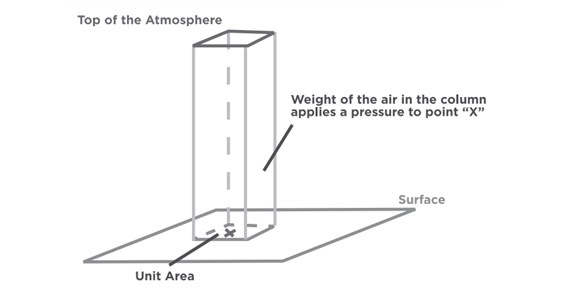 To help students remember the direction of airflow, they can use the phrase “winds blow from high to low.”

In these activities, students will discover how changes in air pressure contribute to many different things, including weather patterns, our respiratory system, and the lift required by airplanes.

Air pressure – The force of air particles against a surface.
Atmospheric pressure – The air pressure of the Earth’s atmosphere by the air above a given point.
Bernoulli’s principle – The faster a fluid (air) flows, the less pressure it creates.
Compression – To squeeze together.
Density – The mass per unit volume (or the number of air particles in a particular location).
Diaphragm – A thin, circular sheet of muscle below the ribcage that contracts and expands to increase and decrease the volume in the chest cavity.
Exhalation – The removal of air from the lungs.
Expansion – To spread out.
Force – A push or pull that can cause an object with mass to change its velocity, direction, or shape.
Inhalation – The intake of air into the lungs.
Lift – The upward motion generated under the wings as a plane moves forward.
Respiratory system – The part of our bodies that allow us to breathe (consisting of lungs, airways, and muscles).
Volume – The amount of space occupied by a substance.
Wind – The flow of air from a high pressure system to a low pressure system.

How Stuff Works | Ears and Diving

NASA | What makes a plane go up?

Weather is an important part of our lives and one that we cannot control. Instead, it often controls how and where…