Discovering a way for people to take flight is undoubtedly one of the most awe-inspiring feats of human ingenuity the world has known to date. Although the first airplane was invented over a century ago, watching planes lift off and land still seems like something that defies reality.

To design a successful airplane, engineers had to master the balance and control of four forces: lift, gravity, thrust and drag, also known as the "four forces of flight". By adjusting these forces, pilots are able to speed up, slow down, lift off and land their aircraft.

This module is designed to demystify each of these forces and examine how they all contribute to flight.

A Brief History of Flight

As stories and legends tell us, people have always wanted to fly, but it’s only fairly recently that the dream has been achieved.

The earliest flying machines were kites, invented thousands of years ago in Asia. Although they’re tethered to the ground, these lightweight wings have carried weapons, cameras and even people. They’re used for sport, ceremonies, fishing, and even carrying messages, and they have taught us a lot about the physics of flight.

In the 1480s, Leonardo da Vinci applied his artistic and engineering genius to the mystery of flight. His ornithopter invention allowed the pilot-passenger to flap giant wings like a bird, and his helicopter-type invention featured a screw-shaped sail. His machines, however, were never built.

The Hot Air Balloon
Lighter-than-air flight happened when brothers Joseph-Michel and Jacques-Étienne Montgolfier invented the hot air balloon. They used a lightweight cloth bag to “catch” the smoke from a fire. It’s easy to see why they would’ve thought that the smoke was lifting the balloon, but it was actually the heated air; hot air is lighter than cooler air, and this is what made their balloon float. In 1783, the first passengers in their colorful balloon were a sheep, rooster and duck. The first people took flight on November 21, 1783. The inventors’ legacy lives on in the French word for ‘hot air balloon’: ‘montgolfière’. 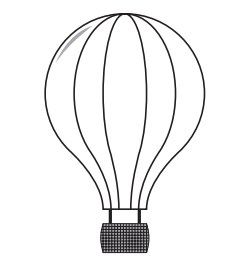 Starting in 1799 and continuing for 50 years, English engineer George Cayley designed many different gliders. He changed the shape of the wings to experiment with the way the air flows over the wings. He also designed a tail to help with stability, and tried a biplane design to add strength. Based on his experiments, he was the one who identified the four forces—weight, lift, drag, and thrust—which are in effect on any flying machine. His gliders were also the first to successfully carry a person into the sky!

In his book On Aerial Navigation, Cayley hypothesized that a fixed-wing aircraft, with a power system for propulsion and a tail to assist in the control of the airplane, would be the best way to allow people to fly.

Several other inventors continued to improve the glider design and experiment with adding power to their prototypes, including Otto Lilienthal and Samuel P. Langley, both with notable achievements in 1891.

Brothers Orville and Wilbur Wright are celebrated as the first to create a powered flying machine that could carry a person. After a great deal of research and experiments with kites, they spent a lot of time testing different glider shapes and learning about how gliders could be controlled. They even designed and used a wind tunnel to test the shapes of their gliders’ wings and tails. Once they found a successful glider shape, they turned their attention to how to create a propulsion system that would create the lift needed to fly.

Their “Flyer” lifted from level ground to the north of Big Kill Devil Hill on December 17, 1903 at 10:35 a.m. Orville piloted the plane, which weighed 274 kilograms. This first heavier-than-air, powered airplane travelled 36.5 metres in 12 seconds.

Modern airplanes are complex machines. However, despite their size and thousands of complex parts, they need the same four forces put forth by George Cayley in order to both take off and stay in flight: gravity, lift, thrust and drag.

Gravity is the force that pulls objects down towards the centre of the earth.

Thrust is the force that moves the airplane forward in flight. Thrust is usually created with engines or propellers.

How does the airplane wing (known as an airfoil) create lift?

But there’s more to it than that! Both the shape and angle of the wings affect the flow of air over top of them. There are a lot of forces at play, but the end result is that the air on top of the wings moves faster than the air beneath them. The faster air has a lower pressure than the slower air (due to Bernoulli’s principle), and this pressure difference contributes significantly to lift. 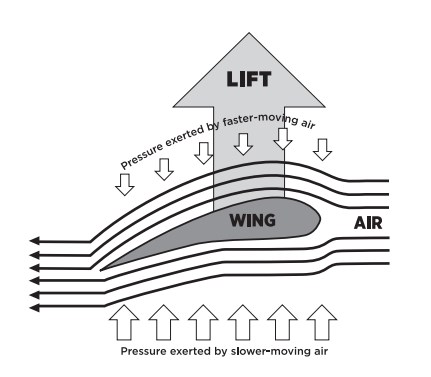 Teacher’s Note:
Scientists are not in agreement about how much Bernoulli principle versus Newton’s Third Law of Motion contributes to lift in an airplane. As an extension activity for keen students, they may research the respective arguments and present them to the class, or find some way of building a model to test both theories.

acceleration: The process of speeding up.
aerodynamics: The study of the way air moves around things. It can apply to any object that moves through air, including cars, airplanes, boats and animals.
ailerons: Flap-like structures on the rear edge of airplane wings that control the plane’s roll. They are hinged on the wings and move downward to push the air down, making the wing tilt up.
airfoil: Often the words ‘wing’ and ‘airfoil’ are used interchangeably, but they shouldn’t be. Airfoil shapes are designed to generate as much lift as possible while incurring as little drag as possible.
altitude: Height.
aviation: The design, development, production, operation and use of aircraft. Derived from avi, the Latin word for ‘bird’.
Bernoulli’s principle: Daniel Bernoulli’s theory explaining that the faster molecules within a fluid move, the less pressure they exert on objects around them. This applies to all fluids, including water, air and gases.
Coanda effect: The tendency of a fluid jet to be attracted to a nearby surface.
deceleration: The process of slowing down.
drag: The ‘backwards’ force of air resistance that tends to slow the forward movement of an airplane.
elevators: Flap-like structures on the rear edge of an airplane’s tail stabilizer that controls its pitch. They can be raised or lowered to change the direction of the plane’s nose. The plane will go up or down depending on the direction that the elevators are moved.
force: A push or a pull action on an object.
gravity (weight): ‘Downwards’ force that pulls all objects towards the earth’s surface.
lift: ‘Upwards’ force created by the movement of air above and below a wing.
pitch: The angle of a plane. Lowering the elevators on the tail causes the airplane’s nose to drop, sending the plane downward (lowering its pitch). Raising the elevators causes the airplane to climb (increase its pitch).
roll: The tilt of the plane to the left or right. The wing with the lowered aileron rises while the wing with the raised aileron drops, causing roll.
rudder: A flap-like structure on the rear edge of an airplane’s fin that controls the plane’s yaw.
streamlined: Designed to offer the least resistance to air or other fluids.
thrust: ‘Forwards’ force that moves a plane forward through the air.
vortex: A spinning flow of fluid.
yaw: The side-to-side turning of a plane. When the rudder is turned to one side, the airplane moves left or right. The airplane’s nose points in the same direction as the rudder. The rudder and the ailerons are used together to make a turn.

How to Make a Classic Dart Paper Airplane

How Planes Can Fly: Forget Bernoulli and Coanda, Think Lanchester-Prandtl

Twirling and turning takeoff! In this activity, students will explore how gravity and air resistance work together to create…

Sending astronauts into space is complex and risky. This activity will help students evaluate the pros and cons of piloted and…