What happens when a bat hits a baseball? Why does a rolling ball eventually stop? How do we walk, jump or run? The answer lies in physics! In this topic, students get the chance to explore how Newton’s Laws of Motion explain the ways that things move.

You won’t have to "force" your students to learn — they’ll push, pull, drop, roll, and fling their way through a variety of demonstrations and activities illustrating the different forces on everything around us. 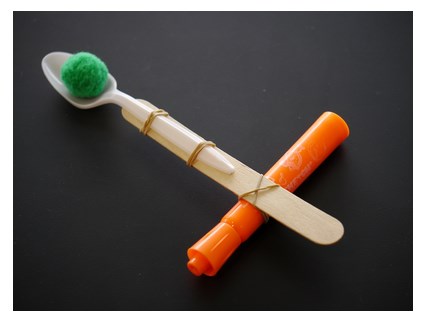 The basis of classical mechanics (the study of "how stuff moves") is Newton’s Three Laws of Motion, which can be used to explain the movement of everything from prodigious planets to petite blood platelets.

First Law: The Law of Inertia
Every object persists in its state of rest or uniform motion in a straight line unless it is compelled to change that state by external forces.

That is, without a force (a push or a pull) intervening, objects tend to keep moving if they’re moving or tend to stay stopped if they’re stopped. Examples of this are astronauts in space, who keep on moving in a straight line until they bump into something, or a ball that won’t move on its own until you kick or push it.

Second Law: Force = mass x acceleration
Force is equal to the change in momentum per change in time. In other words, for a constant mass, the force acting on it equals its mass times its acceleration due to gravity.

Things with more mass (heavier things) require more force to speed up as quickly as things with less mass (lighter things). Imagine trying to throw an orange and a watermelon. The bigger the force, the greater the acceleration (the change in an object’s velocity). It’s also harder to stop a heavier object than it is to stop a lighter one.

Third Law
For every action there is an equal and opposite reaction.

If you push on something, it will push right back. For example, your feet have to push back on the ground in order for you to walk forward. The explosive combustion inside a rocket throws exhaust out its bottom, while propelling the rocket upwards with equal force.

force: A push or a pull action on an object.
inertia: The tendency for objects in motion to stay in motion, and objects at rest to stay at rest, unless acted upon by an outside force.
friction: The resistance an object meets when moving over a surface or through a gas or liquid; it is the force that resists the motion of two surfaces that are touching each other.
mass: The amount of matter in an object, which is measured in grams (g) or kilograms (kg).
acceleration: A change in an object's velocity (speed) over time (from not moving to moving, or from moving quickly to moving slowly or stopping).
velocity: How far an object travels in a certain direction over a period of time.
gravity: The force of attraction which the earth exerts on objects on or near its surface, pulling them downwards. It is also the force of attraction between any two objects.