Light is a wave of energy, and not all energy wavelengths are visible to the human eye. In this unit, students investigate UV light and chemical reactions and their interesting ability to make certain colours glow, or fluoresce.

Light is actually waves of electromagnetic energy. Human eyes can detect light waves with certain wavelengths, between about 390nm and 750nm, but this is only a small part of the spectrum.

We can experiment with ultraviolet light using a black light. Black lights look just like normal fluorescent lamps or incandescent light bulbs, but the bulb itself only emits faint purple light. The “black” glass bulb itself blocks most visible light, so it only releases harmless ultraviolet (UV) light that humans don’t see. Because violet and blue visible light are close in wavelength to ultraviolet light, some of this light escapes and we see a faint purple glow. 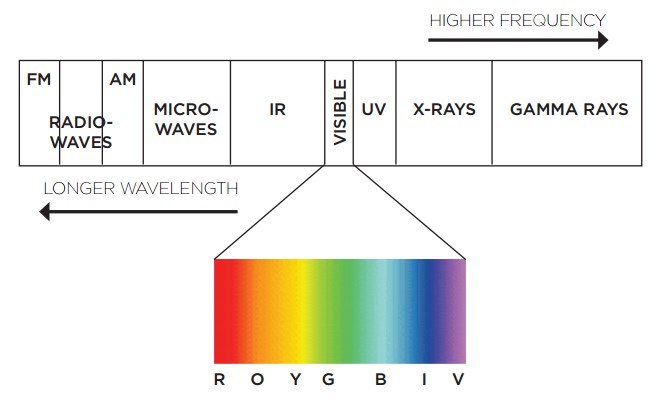 There are many ways to produce light. For example, hot things glow — this is called incandescence. As an object gets hot, its atoms and molecules vibrate. As they vibrate, they release energy in the form of light. Cooler things release longer wavelengths (infrared, red or orange); the hotter the object the more different wavelengths are released, so that a very hot object is “white hot”.

Light without heat is also possible. In chemiluminescence, energy from a chemical reaction excites the electrons of a substance. When the electrons release the energy, it’s in the form of light of a particular colour.

Some substances can store light energy. When light (from the sun or a lamp) shines on a phosphorescent (glow-in-the-dark) sticker, the electrons in the sticker are excited. They release their energy in the form of a greenish light over a long time.

What you see glowing under a black light are phosphors. A phosphor is any substance that emits visible light in response to some sort of radiation. Here, light is the form of radiation.

UV light makes certain objects glow because the objects contain “phosphors” which absorb the energy from UV light then release it again as visible light.

When a black light is on you will notice that white clothes, teeth and other items appear to glow. Because we can’t see UV light, we notice it only when it hits a phosphor — a fluorescent substance that absorbs the UV wavelengths and re-emits visible light. Most laundry detergents contain phosphors to make whites appear brighter in sunlight. The UV light in the sun makes the whites glow “brighter than white.”

ultra-violet (UV) light: One form of light with a wavelength shorter than light that is visible to humans, around 10-400 nm.

chemiluminescence: The creation of light using chemical reactions instead of heat.

bioluminescence: A special kind of chemiluminescence that occurs in some living organisms, like fireflies.

phosporescence: A process in which energy stored in a substance is released very slowly and continuously in the form of light.

fluorescence: A process in which energy from (usually UV) light is absorbed and then immediately released as light of a different colour.

phosphor: A substance that exhibits phosphorescence or fluorescence.

How are rainbows made? What makes grass green and jeans blue? How do sunglasses work? In this series…

Forensic science is a broad discipline divided into numerous subfields, all of which work together to collect, prepare, analyze and…