How are rainbows made?

How do sunglasses work?

In this series of demonstrations and activities, students will explore how colours are created and understood by our brain.

This unit also demonstrates numerous ways of producing or revealing colour through chemical reactions, mixing different colours of light and pigments, and chromatography. As a result, students develop an appreciation for the complexity of something we take for granted: colour!

The back wall of the human eye (the Retina) has two kinds of receptors for perceiving light: rods and cones.

Rods respond to all wavelengths of the visible spectrum in low light conditions; that is, they allow us to see objects in dim lighting conditions.

Cones, on the other hand, respond to very specific wavelengths, and are responsible for sending colour information to the brain. There are three different types of cone receptors for coloured light: one is most sensitive to red light, one to green light, and one to blue light. With these three colour receptors we are able to distinguish millions of colours. Cones are less sensitive than rods; they require higher levels of light to function. This is why it is difficult to make out the colour of objects in low light conditions. 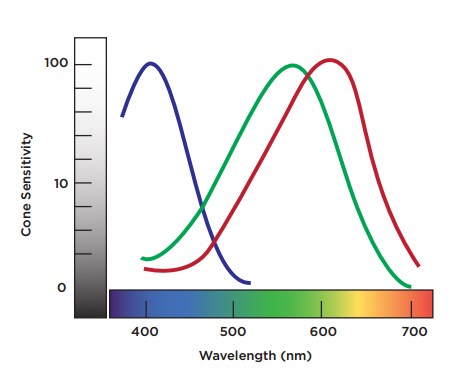 In order to see colours, there must be at least a little bit of light. White light is actually made of all colours, but the colours you see depend on the amount and colour of light being reflected (thrown back) or absorbed (taken in) by an object.

A red apple looks red because white light, either from light bulbs or from the sun, hits its surface, and all of the colours are absorbed except the red which is reflected back to your eye. The cones on your retina get “excited” when they are hit by red light and send electrical signals to your brain, which then recognizes the apple as red. 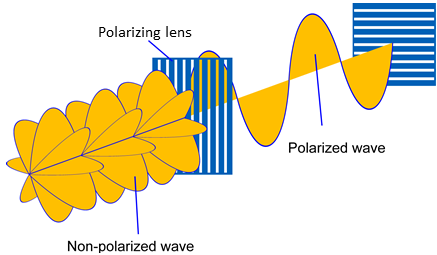 A rainbow is formed when white light passes through rain droplets. Since the different colours contained in white light have different wavelengths, they are refracted through the droplets at different angles, and the colours are thus separated.

Artificial rainbows can be created in class by shining a light source through a prism or clear glass of water — the same process occurs as in raindrops of a rainbow seen outside.

chromatography: A laboratory technique used to separate mixtures, like an ink mixture in a felt pen.

cone: A cone-shaped light receptor on the retina responsible for vibrant colour vision in well-lit conditions.

polarization: A process of restricting a light wave’s vibration into only one plane.

polarize: To cause both the electric and magnetic fields associated with electromagnetic waves, especially light waves, to vibrate in a particular direction or path.

polarizer: A device that converts a beam of light that is oscillating (moving back and forth at a regular speed) in different directions into just one plane. An example of a polarizer is sunglasses.

retina: The back of the eye.

rod: A rod-shaped light receptor on the retina responsible for vision in low light conditions that does not contribute greatly to colour detection.

trichromatic: Having or involving three colours. The human eye, for example, responds to three colours (red, green and blue) and their related hues.

visible spectrum: The range of all the visible wavelengths of light, including all the colours of the rainbow: red, orange, yellow, green, blue, indigo and violet.

wavelength: The distance between the peak or crest of a wave of light, heat or other energy and its next crest; the length of one wave.

In this demonstration, colours appear before the students’ eyes as they learn about cell fatigue and afterimages. Our central nervous…

Light is a wave of energy, and not all energy wavelengths are visible to the human eye. In this unit, students…

How we see certain objects depends on how the surrounding light rays interact with them: Light can be reflected,…

Our senses tell us: what is out in the environmenthow much is out thereis there more or less of it…