How we see certain objects depends on how the surrounding light rays interact with them. Light can be reflected, refracted or absorbed. We can use mirrors to explain the properties of reflected light and the resulting images that we see.

In these activities, students use mirrors to discover how light reflects and how images form. The construction of a kaleidoscope illustrates the formation of multiple images, while the making of a periscope provides a prop for a fun spying game. Students will also discover the amazing images produced by concave and convex mirrors.

Light is a type of energy that we can see, and mirrors are a great way to teach the properties of light. When light meets the surface of an object, three things can happen. The light can be bounced (reflected), bent (refracted), or absorbed.

Reflection
If light is reflected, the light rays leave a surface at the same angle at which they hit it. 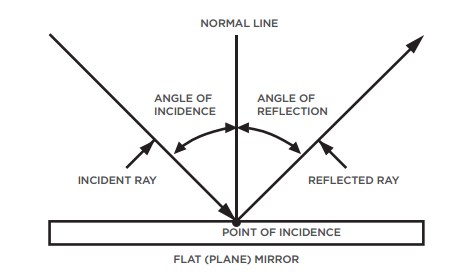 NOTE:
The reflection of light is often discussed using phrases such as "a ray of light bounces off a mirror". This is because when a light ray reflects at the surface of a mirror, it follows a path similar in behaviour to that of a pool ball bouncing off a cushion on a pool table.

However, this is not really the best way to describe the reflection of a light ray. Light rays have a wave nature. Waves are often described as "turning back" rather than "bouncing" when they reflect.

mirror image: A reflected copy of an object that appears identical but reversed, like what you would see in a mirror.

light: A type of energy that our eyes are designed to see.

refraction: The process of light rays passing through a transparent object and then bending.

reflection: The process of light rays hitting a smooth, shiny surface and then "bouncing back".

symmetry: Sameness on both sides of a line, usually down the middle of an object.