Decomposers play an important role in the circle of life—without them, waste would just pile up! These activities help students study decomposers, with particular relevance to waste cycling and sustainability.

Decomposers are made up of the FBI (fungi, bacteria and invertebrates—worms and insects). They are all living things that get energy by eating dead animals and plants and breaking down wastes of other animals.

Compostable or biodegradable waste is waste from once living organisms that can be broken down and recycled by decomposers.

In our homes, we can recycle food waste into usable nutrients using worms as decomposers.

Decomposers are also used in industrial applications such as oil spill cleanups.

Energy enters the food chain from the sun.

Consumers (e.g. animals) get their energy by eating the producers and/or other consumers.

Scavengers and decomposers get their energy by eating dead plants or animals.

Rotting food (or food that’s gone ‘bad’) doesn’t look or smell great but it contains a wealth of nutrients, including carbon, nitrogen, and phosphorous. Living organisms require these nutrients to create cells, tissues and to provide energy for life processes.

When a plant or animal dies, nutrients would remain forever locked in the dead tissues if it weren’t for decomposers. The decomposers complete the cycle by returning essential molecules to the plant producers.

Decomposers (fungi, bacteria, invertebrates such as worms and insects) have the ability to break down dead organisms into smaller particles and create new compounds. We use decomposers to restore the natural nutrient cycle through controlled composting.

Decomposers are the link that keeps the circle of life in motion. The nutrients that decomposers release into the environment become part of the soil, making it fertile and good for plant growth. These nutrients become a part of new plants that grow from the fertile soil. 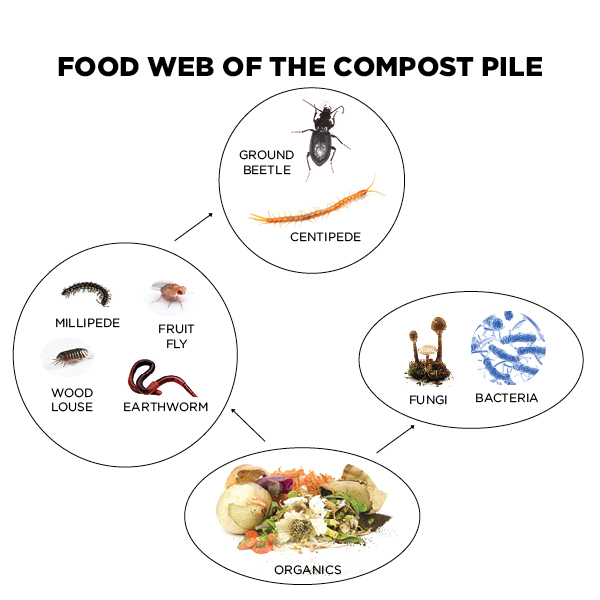 Biodegradability: Biological and biochemical breakdown of organic materials by the environment. Biodegradability simply means that soil micro-organisms and natural weathering processes are capable of decomposing the material into soil nutrients without leaving any harmful residues behind. Or: something that rots.

Bioplastics: Plastics made from renewable plant material or plant products like cornstarch, potato starch, or tapioca. These can biodegrade.

Bioremediation: Any process that uses micro-organisms, fungi, algae, green plants or their enzymes to improve the state of a natural environment altered by contaminants.

Decomposer: An organism, often a bacterium, fungus, or invertebrate that feeds on and breaks down dead plant or animal matter, making organic nutrients available to the ecosystem. Or: ‘FBI’ (fungi, bacteria, invertebrates)

Decomposition: The action or process of breaking down; the rotting or decaying of plant or animal matter.

Invertebrate: An animal that lacks a backbone or spinal column.

Nutrients: Organic and inorganic compounds that a living organism needs to live and grow or a substance used in an organism’s metabolism which must be taken in from its environment. Or: food.

Organic waste: Waste created by or from a once-living organism. It is capable of decay and is composed of carbon compounds.

US Department of Agriculture | Ask the Answer Worm!

Who do we share our homes with? Your backyard contain a great deal of wildlife. Animals will live in any…