Density can sometimes be a tricky concept for students to understand. You can't easily estimate an object's density by simply looking at it. You have to think about the relationship between two of its properties: mass and volume.

In these activities, students will learn about mass, volume and density and their relationship to each other by conducting investigations into buoyancy: floating (and sinking) objects used in their everyday lives.


Simply put, density is how tightly “stuff” is packed into a defined space.

For example, a suitcase jam-packed with clothes and souvenirs has a high density, while the same suitcase containing two pairs of underwear has low density. Size-wise, both suitcases look the same, but their density depends on the relationship between their mass and volume.
Mass is the amount of matter in an object.
Volume is the amount of space that an object takes up in three dimensions.

Let’s compare three familiar substances to explore the concept of density. If we take the same volume (one cubic centimetre) of foam, wood and concrete, we can see that each has a different mass.

It is easy to estimate relative densities if you keep either the volume or the mass of two objects the same.

If you filled one bag with a kg of feathers and another with a kg of lead you would see that the feathers take up much more room, even though both bags have the same mass. This because feathers are less dense, they have less mass per volume. If you made a copper cube and an aluminum cube of the same volume and placed one in each hand, you would be able to feel that the copper cube would be heavier. Copper has more mass per volume than aluminum.

How can one substance have more mass per volume than another? There are a few possibilities:

Any one or a combination of these explanations could be the reason why one substance has a higher density than another. In the case of copper and aluminum, their atoms are arranged similarly, but copper atoms are smaller and have more mass than aluminum atoms, giving it a higher density. 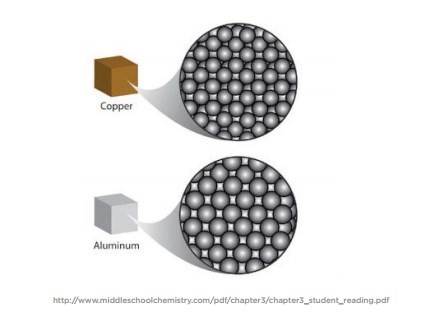 You can really see relative densities at work when you look at a heavy object floating and a lighter one sinking. For example, imagine putting a small piece of clay and a large, heavy wax candle in a tub of water. Even though it’s lighter, the piece of clay has a higher density than water and therefore sinks. Even though it’s heavier, wax has a lower density than water, so the big candle floats. 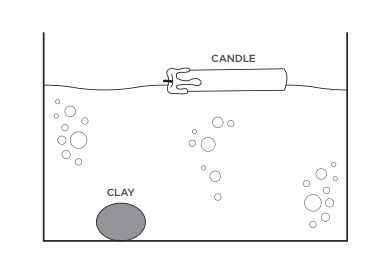 Sinking and floating applies to liquids too. For example, if you add vegetable oil to water, the oil floats on top of the water because the oil has a lower density than the water.

Buoyancy and Archimedes’ Principle
The ancient Greek philosopher Archimedes found that when an object is submerged in water, it pushes aside (or displaces) an amount of water with the same mass as the object.

The water pushes upward against the object with a force (buoyancy) equal to the weight of water that is displaced.

A litre of water has a density of 1 kilogram per litre (1 kg/L), so a bowling ball’s worth of water (4.5 L) can push back on the bowling ball with a force equal to 45 newtons (N). That’s the weight of a 4.5 kg mass. However, the weight of the ball is more like 55 N. That’s more than the buoyant force of the water it displaced, so it sinks.

A beach ball may have the same volume as a bowling ball, but it has a much smaller mass. When you a beach ball in a tub of water, it displaces the mass of water equal to its own mass—about 0.01 kg. If you were to try to push the beach ball down and displace more water, the water would push back with a force greater than the weight of the beach ball. The push of the water keeps the beach ball afloat.

Buoyancy is the upward force we need from the water to stay afloat. Buoyant forces are why we feel so much lighter when we are in a swimming pool. Our bodies are mostly water, so our density is fairly close to that of water. Because of this, an average person needs only a little bit extra buoyancy to float. A life jacket provides this extra lift.

Changing Density
You can change the density of a substance by heating it, cooling it, or by adding something to it. If an object sinks in water, it’s because the object has a higher density than the water. There are two possible ways to make that object float, however:

Archimedes: Greek mathematician, physicist, engineer, inventor and astronomer (c. 287 BC–c. 212 BC).
Archimedes’ principle: Any object wholly or partially immersed in a fluid is buoyed by a force equal to the weight of the fluid that is displaced by the object. In other words, the buoyancy is equal to the weight of the displaced fluid.
buoyancy: The upward force that a fluid exerts on an object less dense than itself; the ability to float.
density: How closely packed together the molecules of an object or substance are.
displace: To push out of the way. For example, when an object goes into water, it displaces the water.
immiscible: Unable to be mixed together, like oil and water.
ironwood: The name for a large number of woods that have a reputation for hardness and high density.
mass: The amount of matter in a given space.
matter: The substance that makes up all physical things.
pumice stone: Lava froth known for its small mass and low density, despite looking like a rock.
weight: A measure of the force of gravity on an object.
volume: The amount of space a substance or object takes up.

Floating and sinking are due to density. If something is heavy for its size, it has a high density. A…

In this unit designed for kindergarten classrooms, children participate in activities about wet and dry materials. These experiments explore evaporation,…

States of matter can be more than just your average solids, liquids and gases! When water turns into snow, is…