States of matter can be more than just your average solids, liquids and gases!

When water turns into snow, is it still water? The answer is yes! Our world is filled with solids, liquids, gases and even other matter that can go from one state of matter to another without changing its chemical substance. In this lesson, students explore these different states of matter and their interactions.

A “state of matter” is a way to describe the behaviour of atoms and molecules in a substance.

There are three common states of matter:

Plasma is sometimes referred to as a fourth state of matter. While it’s similar to a gas the electrons are free in a cloud rather than attached to individual atoms. This means that a plasma has very different properties from those of an ordinary gas. Plasmas occur naturally in flames, lightning and auroras.

Each of these states is also known as a phase.

Elements and compounds can move from one phase to another phase if energy is added or taken away. The state of matter can change when the temperature changes. Generally, as the temperature rises, matter moves to a more active state. 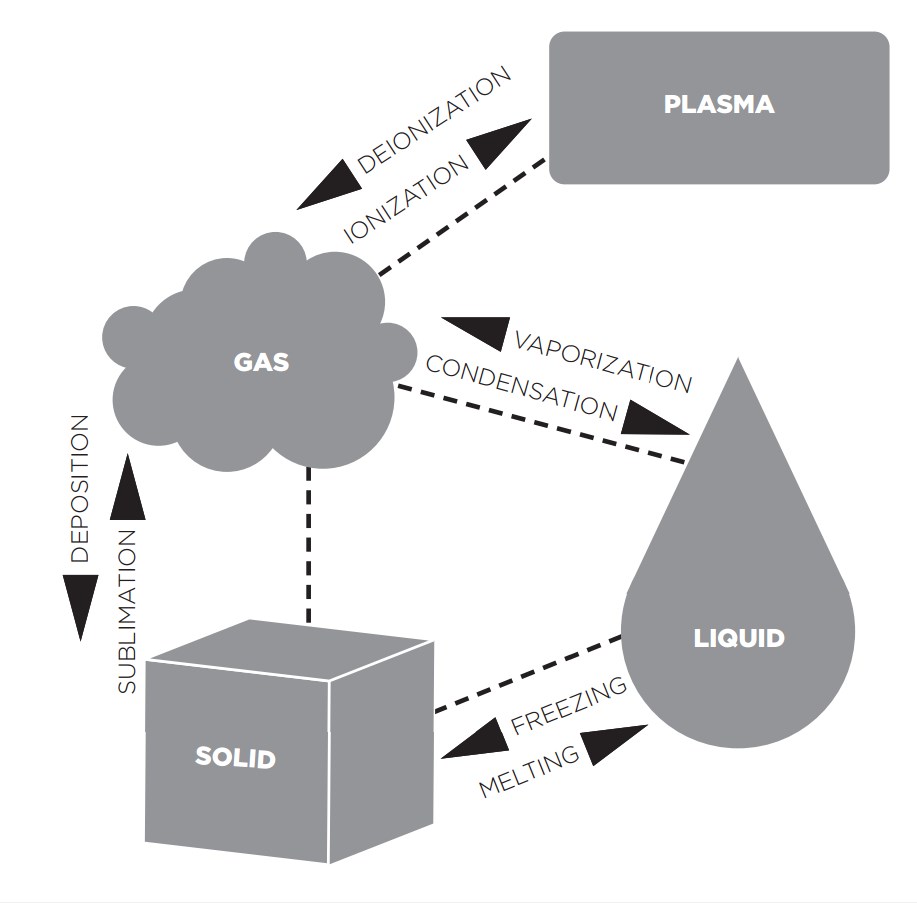 The word phase describes a physical state of matter, when a substance moves from phase to phase, it’s still the same substance.

For example, water vapour (gas) can condense and become a drop of water. If you put that drop in the freezer, it would become a solid. No matter what phase it is in, it is always water — two atoms of hydrogen attached to one atom of oxygen (H20).

cohesion: When two molecules of the same kind stick together.

plasma: A state, similar to a gas, where the electrons are not stuck with their atoms but are free in the cloud; plasma is naturally occuring in flames, lightning and auroras.

non-Newtonian fluid: A liquid with viscosity that changes depending on applied stress.

hypothesis: A suggested explanation for a phenomenon to guide an experimental investigation.

solid: Relatively rigid, definite volume and shape. In a solid, the atoms and molecules are closely bonded that they vibrate in place but don’t move around.

liquids: Definite volume but able to change shape by flowing. In a liquid, the atoms and molecules are loosely bonded. They move around but stay close together.

gases: No definite volume or shape. The atoms and molecules move freely and spread apart from one another.

condensation: To go from a gaseous state to a liquid state.

evaporation:To change from a liquid state to a gaseous state.

solidification: The transition from a liquid state to a solid state.

sublimation: To change from a solid state directly to the gaseous state without going through a liquid phase.

melting: The change of state from a solid to a liquid.

deposition: The change of state directly from a gas to a solid.

temperature: The degree of hotness of a substance, related to the average kinetic energy of its molecules or atoms.

pressure: The pressure of a force upon a surface or an object by another force.

boiling point: The temperature required for a liquid to become a gas.

melting point: The temperature required for a solid to become a liquid.

freezing point – The temperature required for a liquid to change to a solid.

Who knew that chemistry could be so wonderfully gooey? For some substances, it’s simple to classify them as solids, liquids, or…