In this demonstration, students will observe the patterns that occur when a mixture is made in a kalliroscpoe. A Kalliroscope is an art device/technique based on rheoscopic fluids invented by artist Paul Matisse.

Usually you can't see the small whirls and eddies in the motion of a liquid. A Rheoscopic fluid allows visiualization of the movement of the fluids in a mixture.

Rheoscopic fluid means "current showing". Such liquids are effective in visualizing dynamic currents in fluids, such as convection and laminar flow. They are microscopic crystalline platelets such as mica, metallic flakes, or fish scales in suspension in a fluid such as water.

The microscopic crystalline platelets ingredient in this activity's rheoscopic fluid (the soap) are called Pearl Essence, and are made from fish scales. The small shiny crystals are often extracted from the scales of herring. Pearl Essence is added to soaps, shampoos, and cosmetics to make them look prettier.

When the fluid is put in motion, the suspended particles orient themselves in localized, preferential alignment, larger parts of the fluid moving sheer parallel to other parts of the fluid. The particle-filled fluid will reflect differing intensities of light, making the movement of the currents visible. 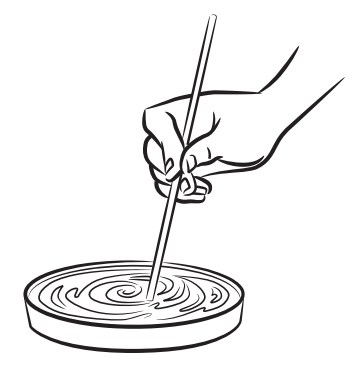 This is a recommended post-visit activity for a field trip to Science World.

In this unit designed for kindergarten teachers, students are introduced to chemistry through activities that explore dissolving, separating, mixing and…