Sound is all about vibrations.

The source of a sound vibrates, bumping into nearby air molecules which in turn bump into their neighbours, and so forth. This results in a wave of vibrations travelling through the air to the eardrum, which in turn also vibrates. What the sound wave will sound like when it reaches the ear depends on a number of things such as the medium it travels through and the strength of the initial vibration.

In the following activities, students will use simple materials to create, visualize and feel sound waves, investigate vibration and its role in producing sound, and make their own percussion instruments.

Sound is a type of energy made by vibrations. When an object vibrates, it causes movement in surrounding air molecules. These molecules bump into the molecules close to them, causing them to vibrate as well. This makes them bump into more nearby air molecules. This “chain reaction” movement, called sound waves, keeps going until the molecules run out of energy. As a result, there is a series of molecular collisions as the sound wave passes through the air, but the air molecules themselves don’t travel with the wave. As it is disturbed, each molecule just moves away from a resting point but then eventually returns to it.

Pitch is related to frequency, but they are not exactly the same. Frequency is the scientific measure of pitch. That is, while frequency is objective, pitch is completely subjective. Sound waves themselves do not have pitch; their vibrations can be measured to obtain a frequency, but it takes a human brain to map them to that internal quality of pitch.

The pitch of a sound is largely determined by the mass (weight) of the vibrating object. Generally, the greater the mass, the more slowly it vibrates and the lower the pitch. However, the pitch can be altered by changing the tension or rigidity of the object. For example, a heavy E string on an instrument can be made to sound higher than a thin E string by tightening the tuning pegs, so that there is more tension on the string.

Nearly all objects, when hit, struck, plucked, strummed or somehow disturbed, will vibrate. When these objects vibrate, they tend to vibrate at a particular frequency or set of frequencies. This is known as the natural frequency of the object. For example, if you ‘ping’ a glass with your finger, the glass will produce a sound at a pitch that is its natural frequency. It will make this same sound every time. This sound can be changed, however, by altering the vibrating mass of the glass. For example, adding water causes the glass to get heavier (increase in mass) and thus harder to move, so it tends to vibrate more slowly and at a lower pitch.

What is Sound?
When we hear something, we are sensing the vibrations in the air. These vibrations enter the outer ear and cause our eardrums to vibrate (or oscillate). Attached to the eardrum are three tiny bones that also vibrate: the hammer, the anvil, and the stirrup. These bones make larger vibrations within the inner ear, essentially amplifying the incoming vibrations before they are picked up by the auditory nerve. 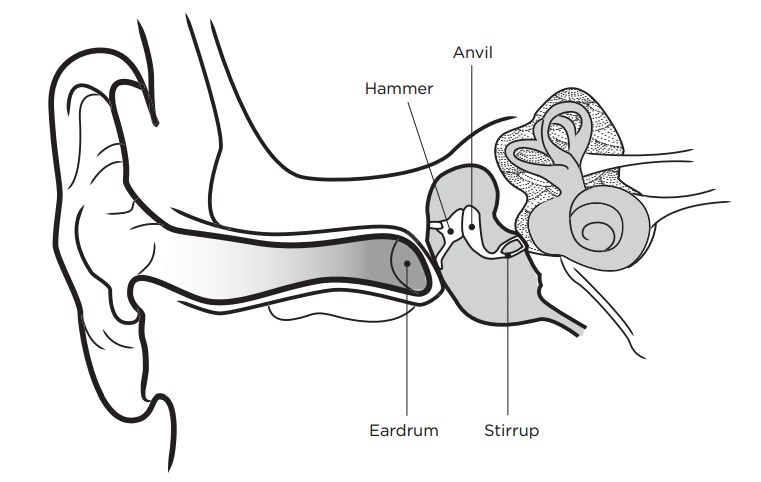 Speaking (as well as hearing) involves vibrations. To speak, we move air past our vocal cords, which makes them vibrate. We change the sounds we make by stretching those vocal cords. When the vocal cords are stretched we make high sounds and when they are loose we make lower sounds. This is known as the pitch of the sound.

The sounds we hear every day are actually collections of simpler sounds. A musical sound is called a tone. If we strike a tuning fork, it gives off a pure tone, which is the sound of a single frequency. But if we were to sing or play a note on a trumpet or violin, the result is a combination of one main frequency with other tones. This gives each musical instrument its characteristic sound.

amplification: The process of increasing or making stronger.
compression: The process of squeezing together or closer.
frequency: A measure of the number of vibrations per second.
Hertz: The metric unit for frequency (1 Hertz (Hz) = 1 vibration per second).
longitudinal wave: A wave with particles vibrating in the same direction that the wave is travelling.
medium: A material (solid, liquid or gas) that is used or travelled through.
molecule: A particle made up of particular atoms.
oscillation: Vibration.
percussion instrument: Any musical object that produces a sound when hit with an implement, shaken, rubbed, or scraped, or by any other action which causes the object to vibrate in a rhythmic manner.
pitch: The quality of the actual note behind a sound, such as G sharp; a subjective definition of sounds as high or low in tone.
pressure: Applied force.
rarefaction: The process of spreading apart, or decompressing.
resonance: The tendency of an object to vibrate at its maximum wave size (amplitude) at a certain frequency.
tension: A tightening stress force related to stretching an object.
tone: The quality of sound (e.g. dull, weak, strong).
transverse wave: A wave with particles vibrating perpendicular to the direction that the wave is travelling; this type or wave is not produced in air, like longitudinal sound waves.
vibration: Repetitive motion of an object around its resting point; the backbone of sound.

Science Kids at Home | What is Sound?

Use a stretched Slinky to model sound waves moving through a material. When you squeeze the Slinky’s coils together…