From the hide used to make handbags, to the tiny dogs kept inside said handbags, humans have long been experts in finding ways to fully utilize our animal brethren for purposes other than food.

“Nature builds no machines,” Karl Marx once wrote, but humans do. This is the Information Age, the era of silicon chips and Shake Weights, where you can’t step foot out your front door without being recorded on somebody’s camera. When you live in the fast-paced 21st century, it's easy to forget that we aren’t too far removed from a time when something like this was considered an impressive piece of technology. Yes, there was a time when there wasn’t anything to plug in; a time when, if something needed to be done, we had to get up off the couch and do it ourselves. But for the things we really didn’t want to do, we had our pre-machine machines: animals.

We made some of our first big technological leaps on the backs of animal labour. Pigeons were trained to deliver mail instead of people who wear too short short-shorts. Camels and donkeys would carry your heavy load to it’s next destination, no need for that ’86 Dodge Ram. Violin virtuosos didn't pluck strings of metal and polymer, they used tightly-wound dried sheep intestine. Before fabrics, you’d have to lay the reckon with another animal and then take it’s coat for you, instead. And perhaps most obviously, why till the fields yourself if an ox will do it for you?

It didn’t take long (my guess is, approximately, it happened immediately) for humans to figure out that the harnessed strength and size of certain animals make for powerful allies in battle. Horses were a staple of warfare from the beginning of their domestication around 5,000 years ago until being phased out in favor of tanks, trenches and machine guns during World War I. Armored elephants, a precursor to the tank, were first plunged into action over 2,000 years ago by Persian empires, subsequently by Alexander the Great, and then, probably most famously, by Hannibal to cross the Alps into Italy during the Second Punic War (218-201 BC).

Drones (the projectiles, not the male bees) are the choice weapon of war by today’s nations: long range remote-controlled projectiles that keep the launcher at a safe distance while destroying the villages and hospitals of their enemies. We no longer have much use for animals on the battlefield, which must have come as a major disappointment to them. It’s been long known that animals easily become emotionally involved in human politics, unless Animal Farm was meant to be some kind of historical allegory, in which case my understanding of biology will be completely shattered.

You’d think we wouldn’t have many jobs left for animals in today’s highly-digitized workforce, but you’d be so wrong. Animals are employed by humans for all kinds of things. Dogs are trained as service animals in tons of countries, giving assistance to the blind, deaf and others with different types of disabilities. In fact, guide dogs for the blind have been in use since the 16th century. Bomb-sniffing rats are used (primarily) in Africa to sniff out land mines which can be left buried underground after a war. The internet also tells me snake massage is a thing.

And of course, modern society still primarily operates on fossil fuels, which are really just super compressed layers of dead plant and animal matter, so we’re still kind of using animals to make everything go. Thanks, animals!

Needless to say, our working relationship with animals has changed dramatically as technology evolved. Animals aren't commonly considered to be mindless tools as they might have been a few short centuries ago. Today, groups like PETA and WWF fight for animal rights. Animal-free diets are becoming more popular, and as any pet owner can attest, there still isn't a machine that can replace animal companionship.

How did we come to bend today's animals to our affecionate will? Early human hunters likely teamed together with wolf packs to take down large prey, and this association is what may have led to the domestication of dogs, man’s best friend, artificial-selection’s nicer wolf. You probably already know how obsessed the Egyptians were with cats. And those are just the animals we let live inside our homes. Farm animals like sheep, goats, cattle, pigs and chickens were all domesticated and selectively bred by humans away from their more aggressive predecessors, and often share a bond with their caretakers that can be hard to understand to us urbanized folk. When I started at Science World, I was as scared of the chickens as they were of me. Now I can’t go a work day without busting in the coup and cuddling them so hard. It's a good thing they have such efficient lungs. They're still not super stoked on me though. 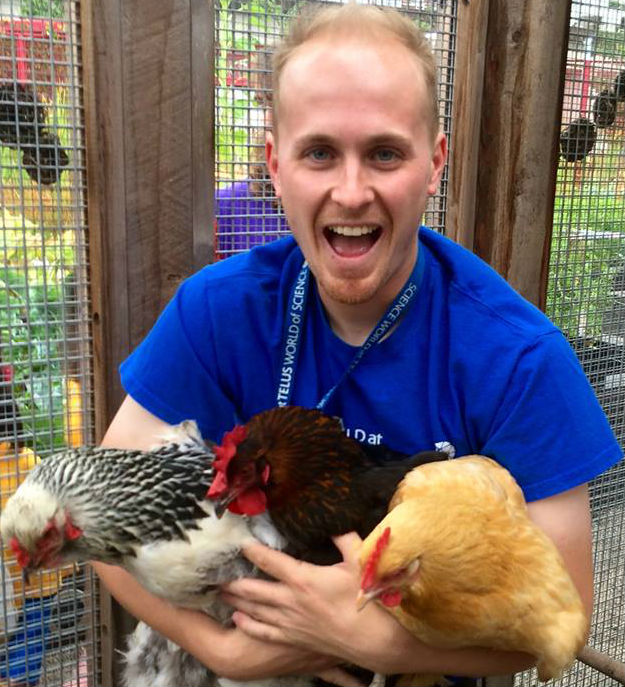 Want to learn more about our chickens? Meet them here or come visit them in chicken person at our outdoor Ken Spencer Science Park. Or learn how to make your own insect pooter and stare at live animals in the comfort of your own home!