This article is powered by Concert Properties, presenting sponsors for Science World’s feature exhibition Towers of Tomorrow, empowering us to explore the intersection of urban planning and community collaboration.

Only 2 months after Vancouver’s incorporation in 1886, railway workers lost control of a clearing fire. Within an hour, its flames consumed nearly every building in the new town.

Alerted by the billowing black smoke on the opposite shore, Squamish women led a response, paddling canoes across what is now known as the Burrard Inlet—what the Tsleil-Waututh call səl̓ilw̓ət (Sleilwaut)—to rescue those who’d run into the water to escape the flames.

Dozens perished that day, and only 3 of 1,000 buildings survived.

The Great Vancouver Fire of 1886 could have meant the end for Vancouver. But, within hours, people started to rebuild. The centre of industry shifted to the north shore of a different inlet, one a British hydrographer called False Creek, alerting settlers that no thoroughfare existed and contributing to Indigenous erasure of the area.

It was at this false creek’s head nearly 100 years later that Expo 86 Crown Corporation built a 17-storey geodesic dome as the signature building for the 1986 World’s Fair, Vancouver's 100th birthday celebration. 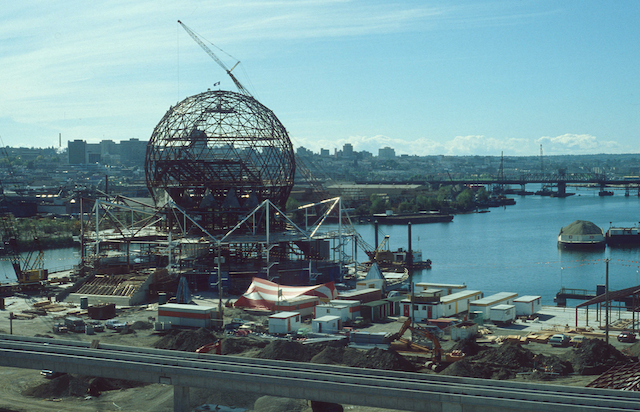 Today, the sparkling structure is an icon of the Vancouver skyline and home to Science World, the city’s non-profit science centre. But when it was built, it was a site of some contention.

“I was in the view that the dome should be built with permanence,” shares David Podmore, VP of Design, Development and Engineering for BC Place Ltd, the corporation responsible for the development of 225 acres where the World Fair would take place.

“We were to prepare the master plan, to install services, to build the Cambie Bridge, the seawall. And those were all to remain useful.”

1980: BC Place Ltd's plan for the north shore of False Creek, most of which is still in place today. 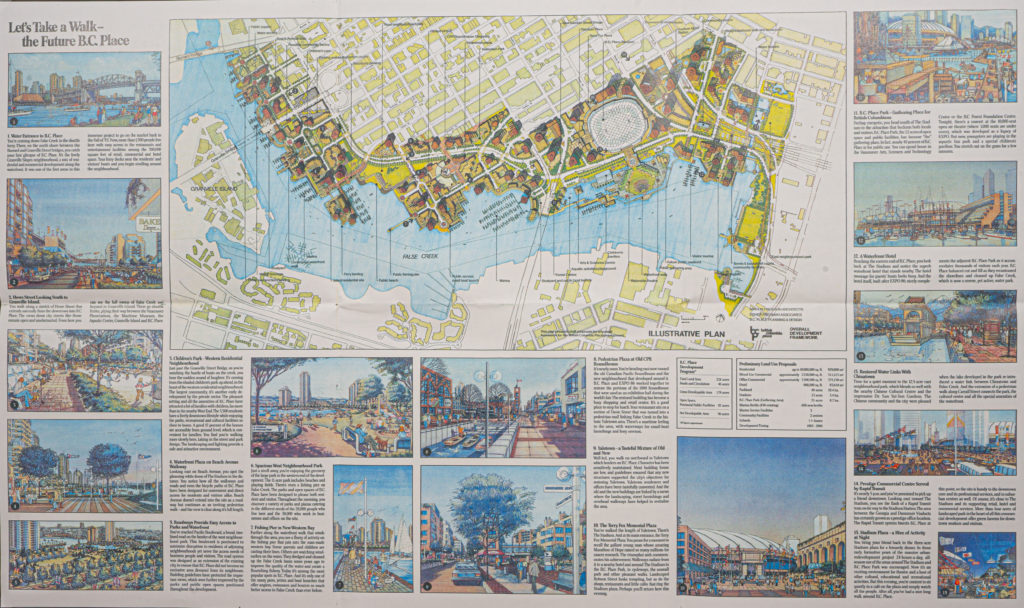 Meanwhile, the fair's signature building fell under Expo 86 Corp's purview. Much to Podmore's disappointment, architect Bruno Freschi designed the geodesic dome as a temporary structure to tear down later.

“I saw it as short-sighted,” he laments.

Friction between the two crown corporations generated a third: BC Pavilion Corp (PavCo). On top of being somewhat of a mediator between BC Place Ltd and Expo 86 Corp, PavCo ensured that the province was present throughout the development of the Fair.

“It was our job to make sure we did the best we could to represent the province as well as possible,” says Podmore, who took up the role of CEO of PavCo while maintaining his Vice Presidency at BC Place Ltd.

With his years of experience in city planning, Podmore’s lead ensured that most of the infrastructure planned and built by his companies remains in place as integral features of Vancouver today.

Podmore fought hard to acquire the old Dunsmuir Tunnel so that the Expo line could run through it, as it still does today; 55,000 vehicles use Cambie Bridge every day; 239,000 cyclists biked the north shore False Creek seawall in July alone of last year; 1 million people a year visit BC Place Stadium.

In contrast, not much built by Expo 86 remains - except for the geodesic dome. But not at the direction of Podmore.

Thanks to a group of passionate community members who’d organized into a non-profit and saw the dome’s potential as the permanent home of a science centre, the structure was saved.

Upon acquisition of the dome, the non-profit organization became A.S.T.C Science World, and the building became what Podmore had envisioned after all, a permanent (and iconic) fixture. But its inherent temporary nature means the building needs largescale renovations and has for 30 years.

Much of the vital infrastructures upgrades, including repairing a leaky roof, have been put on hold due to the global pandemic, which closed the centre for 4.5 months.

Its recent reopening to the public is not without continuing fundraising and government support.

After Expo 86, Podmore and a group of business people put in a bid to buy the Expo lands together.

The bid proposed to develop the site over time and offer shares to the public to invest. Podmore imagined a large-scale, collaborative community project that would bring together different interests with a common goal: to plan for long-term development.

But like his suggestions to build for permanence during Expo 86, his vision of collaborative planning went unfulfilled.

“We were not successful. The whole area was sold outright,” he says. The space went to the highest bidder.

After that, in 1989, Podmore and Jack Poole co-founded Concert Properties, a development company owned exclusively by union and management pension funds and a presenting sponsor of Science World’s current feature exhibition, Towers of Tomorrow with LEGO® Bricks.

And the area that was once Expo 86? Today, almost every acre is accounted for with condos, parks, a school and daycares.

But there’s one 3.5-acre patch of land directly north of Science World that still sits vacant. For decades, its developers rented this area to the likes of Cirque de Soleil and Diner En Blanc. Then, in 2018, they constructed a pop-up community park to try to meet the growing needs of local families who've been calling for more usable outdoor public space for years. 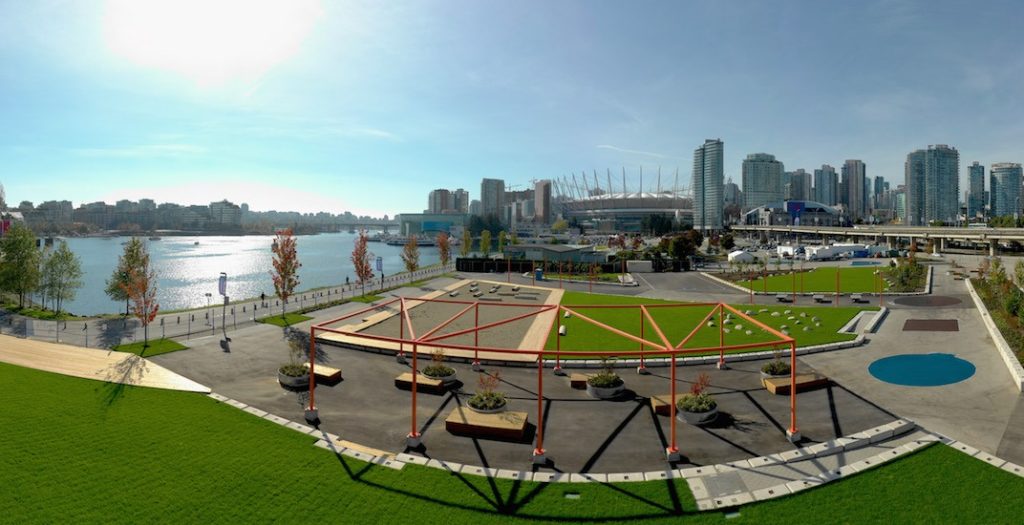 The 3.5-acre park has log seating, sandy volleyball courts, strings of globe lights above picnic tables and pockets of manicured green grass. But its impermanence is obvious for a number of reasons, such as its location, cushioned directly between the seawall and the Georgia and Dunsmuir viaducts, two other structures likely fated for demolition. What comes after that, according to the city’s plans, should be built to last.

Extending dreamscapes of the future.

Our feature exhibition is now open until January 2021! Towers of Tomorrow, presented by Concert Properties and White Spot Restaurants and supported by TransLink, features 20 of the world’s most astonishing skyscrapers from around the world. Learn more about the science and engineering behind extra-tall architecture.