On a recent vacation, I spent a lot of time driving. This gave me time to wonder why, on hot days, on clear flat roads, I would sometimes see, what appeared to be, puddles of water reflecting the images of cars, the sky or the surroundings. As I approached these puddles, they would disappear only to be replaced by another one further down the road.

Apparently, I was looking at mirages. From watching cartoons, I expected a mirage to be a kind of hallucination of water and palm trees that only happened to a deliriously dehydrated, poor sap in the middle of a hot, sandy desert. But no, you can actually take pictures or movies of the mirage effects, so it's not just a mental thing.

Nothing goes faster than the speed of light, but its speed does differ through different media. When light passes from air into a different medium, like water, it may change direction, or refract, which you might notice when you see a straw that looks bent in a glass of your favourite beverage. Photons (particles of light) take the path that takes the least amount of time when travelling from one point to another. This often results in a curved path. The refractive index of a medium is the ratio between the speed of light in the medium and its speed in a vacuum.

The Heat Is On

On a sunny day, the ground becomes hot; especially black asphalt. This heats the air just above the ground. Warmer air is less dense and has a slightly lower refractive index than colder air. Some argue that you see a mirage because light refracts, due to the different refractive indices of these air temperatures. Others argue that these temperature differences result in the reflection of an image. Some say both occur or that it boils down to semantics. I have not come across an explanation, experiment, calculation or simulation that convinces me that either explanation is the definitive one. The situation where hot air is lower to the ground than cold is short-lived, so mirages are tricky to study, experimentally.

No matter how the light bends or bounces, our brains expect, reasonably enough, that light travels in straight lines. So we interpret the image produced by curved light, due to the photon path, to be in a different location on the road. This cerebral expectation plus the shimmer of the image makes the image look like water. But as you approach the mirage, those light rays involved in the mirage, miss your eyes and the effect disappears and a new “puddle” appears further away.

The next time you are in a car and see a mirage, notice the conditions under which it happens, like the temperature, wind and road conditions. If you share your observations, maybe we can sharpen our understanding about why we see mirages. 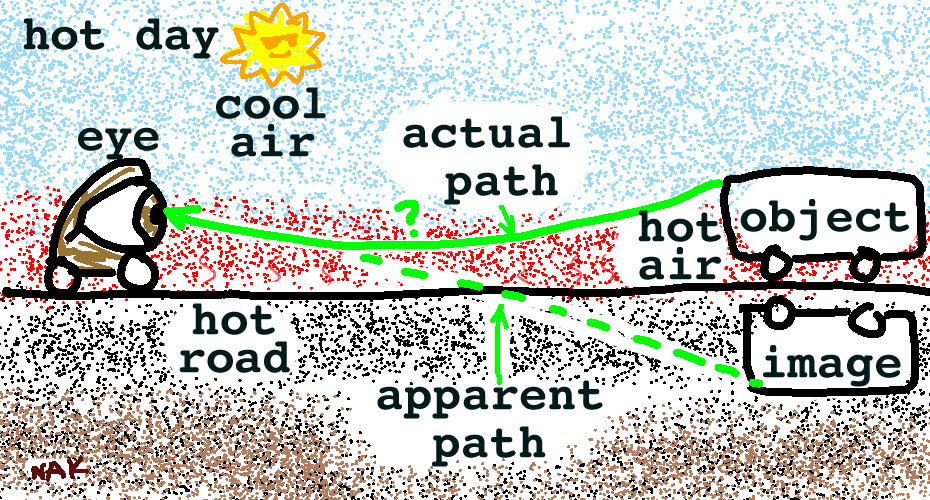 Delve deeper into the world of light, check out our Fall 2014 feature exhibition, LIGHT: Illuminating Science & Art, Science World Resources Mirrors and Colours and Light, and check out "No Light? No Problem!" one of our classic SWOG articles by Terry.