What luxurious lives we, the single-stomached creatures, lead. We eat our food, our stomachs break it down and then we turn some food into energy and some into poop (or maybe diarrhea if you’ve made a dietary mistake). We don’t have to chew any cud and we don’t have to eat our own poop.

Yup, eating and digesting take relatively little effort for humans, which gives us lots of time to ruminate on things like jobs, bills, relationships, bills, existentialism and bills. Unfortunately, our ruminant friends in the animal kingdom are not afforded such luxury.

Did you know that cows spend two-thirds of their day eating and digesting the massive amount of food required to fuel their big bovine bodies? That sounds like a lot of work!

So, do cows really have four stomachs?

Not exactly. The popular myth that cows have four stomachs is only sort of true. Cows are ruminants and so are: sheep, goats, yaks, deer, giraffes and antelope (but definitely not ostriches). Ruminants have one stomach, but four different chambers (unlike the Wu-Tang Clan, which has 36 chambers). 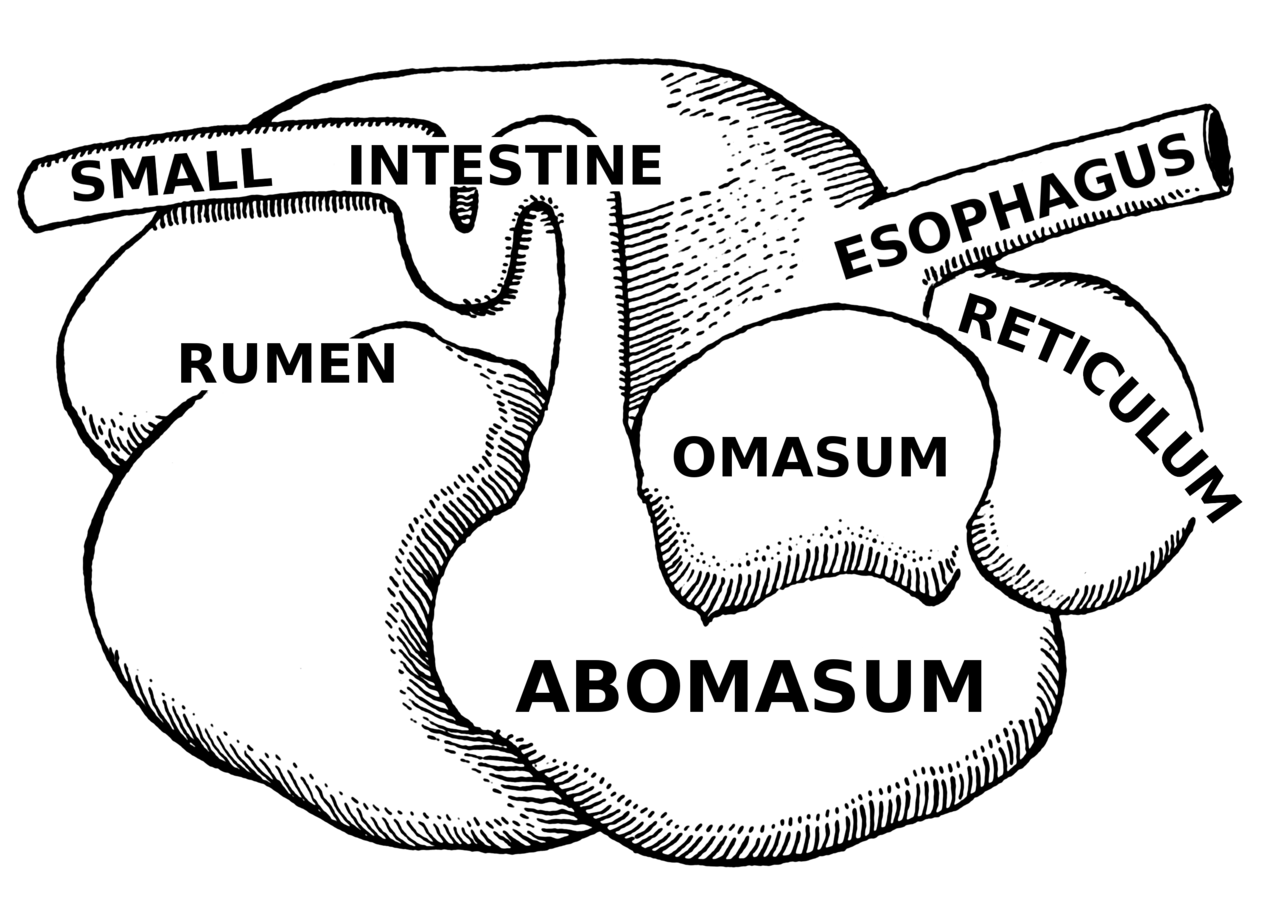 The rumen and the reticulum

Everything starts off in the first two chambers: the rumen and reticulum, known together as the reticulorumen. The rumen is the largest chamber in the stomach and is filled with billions and billions of bacteria, protozoa, fungi and other microbes that immediately get to work breaking down the cow’s food.

The reticulum contains a filter that looks like a honeycomb, designed to catch larger chunks of yet-to-be-digested food. This is where the solids and liquids are separated. The liquids continue down the digestive tract and the solids clump together and are regurgitated (a.k.a. hurled, barfed, spewed, upchucked) back up into the cow’s mouth—we call this cud. This is when the infamous chewing of the cud takes place.

The omasum and the abomasum

Many ruminants have enhanced oral tools for their cud-chewing habits. Cows lack upper incisors, instead they have a tough patch of skin called the dental pad which is great for mashing up plant matter. Cows also drool a lot—as you may have noticed—to cut down on bloating and to balance out acid-producing foodstuffs. When the cows re-swallow the newly-chewed and broken-down cud, the food moves into the third compartment, the omasum. Here, the water is reabsorbed and the food is broken down even further before it travels into the abomasum, the final chamber.

The abomasum is often referred to as the “true stomach,” as it serves the same purpose as our one stomach. Digestive enzymes break the remaining food down into nutrients the cow’s body needs and blood disperses said nutrients around the body from the small intestine. Finally, the remaining indigestible material passes through the large intestine where poop is finally formed and ejected from the backside.

It sounds like a lot of work, but ruminants don't lead very busy lives

You can see how much of a ruminant’s life is devoted to simply eating and digesting food. While this may seem like a major disadvantage to more intelligent animals, like monkeys, ruminants don’t have to worry about things like: hunting, growing food or taking over other animals' brains. All they have to do is lower their big heads to the ground and they’ll probably find some breakfast waiting for them there. It could be great actually. Don’t you wish you could just laze around, eat and sleep all day? But unless you’re a ruminant or a teenager, you’re out of luck, pal.

Want to know more about how animal guts work? Come and check out the insides of a bunch of animals in our feature exhibition, ANIMAL INSIDE OUT, on until March 28, 2016. Happy digesting!