For #BlackHistoryMonth, Science World is amplifying scientific and artistic voices in the Black community whose contributions to STEAM are making history. Celebrate with us!

Dr. Nicola S. Smith is a postdoctoral researcher at Simon Fraser University. Her research focuses on invasive marine species in Canada and their level of threat in climate change scenarios. She aims to identify strategies to help coastal communities manage and adapt to these threats.

"I'm an advocate for Black representation in STEM. I believe that having a role model that you can relate to is a strong motivator for success."

Dr. Nicola S. Smith in The Bahamas, celebrating her last dive after a four-month research project (Photo courtesy of The Marine Ecology Lab) 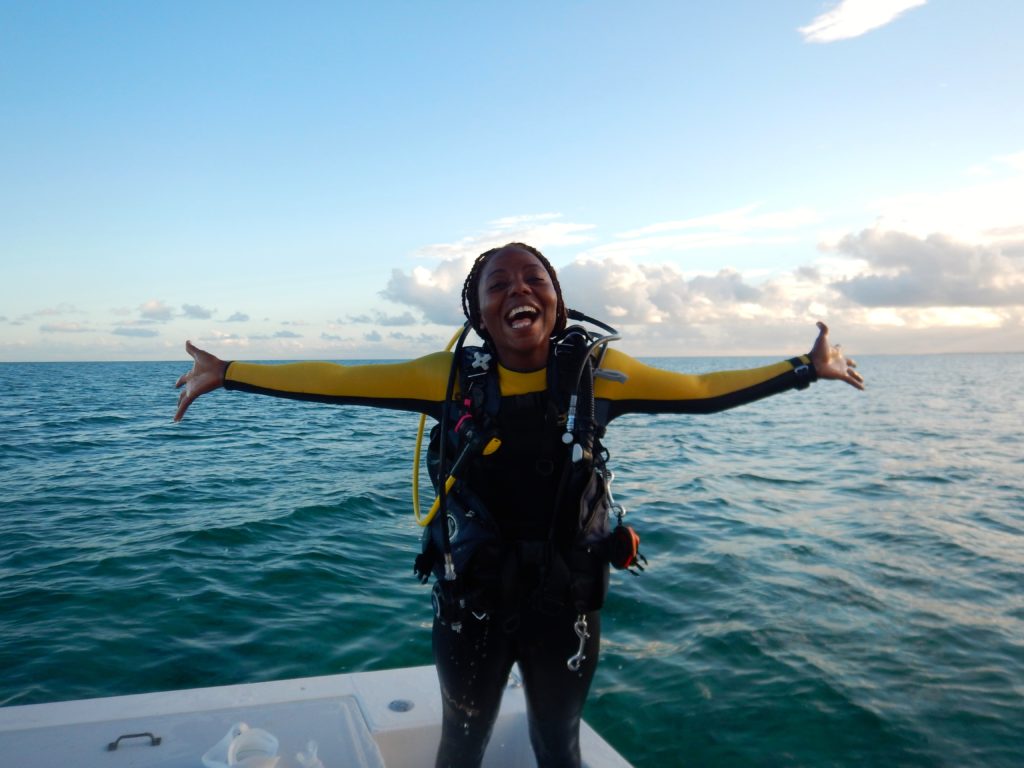 Dr. Nicola S. Smith is a 2021 Liber Ero Fellow at the University of British Columbia and an Associate Editor for NeoBiota, a peer-reviewed, open access, online journal on biological invasions. Previously, she was a Bullitt Environmental Fellow and postdoctoral researcher at Simon Fraser University where she reconstructed the sponge fishery of The Bahamas over the past 180 years and identified ways to make the fishery more sustainable.

Each week in #BlackHistoryMonth, we're sharing a new audio or visual story amplifying scientific and artistic voices in the Black community whose contributions to STEAM are making history.

Dr. Nicola S. Smith: When I was really young and I was growing up in The Bahamas, at the time I really hated frogs. And it was because someone had told me this ridiculous story that if frogs peed in your eyes you would go blind.

Dr. Nicola S. Smith: So, I kind of told my mom, “I don’t like frogs. I really don’t like them!” She allayed my fears by saying, “Do you like when mosquitoes bite you?” And I said, “No, I really hate it when mosquitoes bite me.” And then she said, “Well, you have to like frogs, because frogs eat mosquitoes!” That was basically my first introduction to a food web. That really got me excited and really got me thinking about what roles all these organisms play in our eco-systems around us.

Narration: Nicola’s mother was a zoology professor at a university in The Bahamas. She taught Nicola to view the world through a lens of wonder.

Dr. Nicola S. Smith: When I was really young, my mom said, “Look at this plant. These are variegated leaves.” And I’m like, “What’s that?” And she said, “Well when the leaf is green but white in certain places on the leaf? That’s where the leaf is not photosynthesizing, it’s not making its own food, and that’s why it’s white there.” And when I showed up at school one day and the teacher asked, “Who knows about variegated leaves?” I raised my hand, and I was the only person in the room. I realized that some of these things my mom told me were not common knowledge, and you would only know them if you were a zoologist or a biologist in general.

Narration: Nicola says the biggest lesson her mother taught her before she passed away when she was 16 years old was to figure out what her talents were and to use those talents to help others.

Dr. Nicola S. Smith: I like solving problems, basically, and I like helping people. So that’s why I’m in the field of applied ecology, because it allows me to work on real-world problems that affect life on this planet.

Narration: Today, Dr. Smith researches the effects of climate change on marine communities, having just begun a post-doc on how climate change might affect invasive species on the Canadian coastlines. Before that, Dr. Smith conducted research in The Bahamas on the impacts the Indopacific Lionfish invasion in the Caribbean. While she was there, she dove every day, 6 times a day for 4 months.

Dr. Nicola S. Smith: So, when I was on the reefs one hour before dawn, I took my regular flashlight and shone it over the sea grass meadows, and I saw glimpses of yellow and white striped fish looking back at me. But then what happened was as the sun rose, literally hundreds of runts just flooded the reef. They were swimming above me, around me, below me, they were just all around me and it was as if I wasn’t there as they migrated back onto the reefs in swarms. And it was like a flood of gold. And it was literally one of the most beautiful experiences I’ve ever had in my life.

Narration: Dr. Smith participates in social media initiatives like #BlackinMarineScience and #BlackinSTEM because she knows how important it is to see oneself represented.

Dr. Nicola S. Smith: I feel a lot of times like I don’t belong in science. Because I go to all of these conferences every year, and I’m usually the only Black person in the room, or one of 3 at most, outside the catering staff or the cleaning staff. And there’s nothing wrong with being the catering or cleaning staff. But if that’s the only people you see that look like you and you’ve been to tons and tons of conferences, you begin to think, should I be in these rooms? Should I be inhabiting these spaces? I really like Black History Month because I like seeing the wonderful contributions that people like me have made to society, as well as seeing the struggles we’ve overcome. It makes me really proud to be a Black person and it gives me a sense of belonging. Because, a lot of times in schools you will hear about the accomplishments of Black scientists and so Black History Month lets me know that Black scientists exist and they have done great things.