This is my childhood dog, Gilligan. Pretty cute, huh? Think again. This dog was a monster, and we did not get along (much like Skipper and the real Gilligan). Over the years, I caught him regularly committing the following atrocities: digging up the garden, sleeping on the couch, gobbling my unattended food, biting me and the neighbourhood children, and last but certainly not least, eating his own poo. That’s right, Gilligan used to eat...his own...poo.

This simultaneously disgusted and fascinated me. “Why would he eat his own poo?” I would wonder. And though Gilligan went to doggy heaven many years ago, it’s a question that stayed with me into adulthood.

Why would anything do that?

Though it sounds repulsive and backwards to us, it turns out that a lot of creatures eat poo. Some animals—dogs, kittens and even a few species of primates—have been known to sample stool (though not always their own, and it's not a major part of their diets, typically). On the other hand, some animals heavily rely on coprophagy (excrement-eating) to complete their digestive process. Let’s talk about the ones you’ve probably heard of first.

Coprophagy has existed in the insect kingdom for millions of years. I’m sure we’ve all grimaced at a busyness of flies going to town on a rogue piece of poo. As unappetizing as it is to us, the sight of a fresh two-sie must be mouth proboscis-watering to a fly. There are tons of nutritious, fly-size chunks of undigested food in mammalian manure, a smorgasbord for flies and other coprophagous insects (like the aptly named dung beetle). It's like if you were to pick through a Jell-O salad just for the fruit, ignoring the surrounding boiled pig skin gelatin. 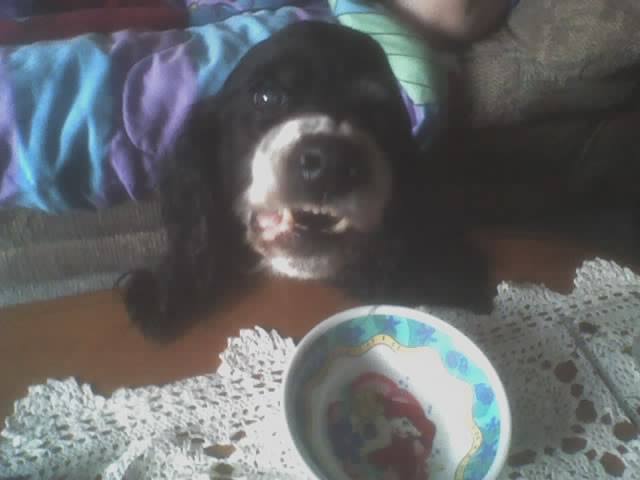 Mammals have different reasons for ingesting poo. Remember Gilligan? Though he may have been doing it for the same reason as the fly (to salvage precious morsels of pood*), some dog experts speculate the behavior could've been learned from his mother. Canine moms ingest small amounts of puppy waste during cleaning, which makes sense since dog toilet paper isn't a thing (yet...). It’s also common for many mammal mothers to gulp down their offspring’s droppings to keep potential predators from sniffing them out. That's serious motherly love!

*Poo and food mixed together, not a technical term

It’s not just moms doing the poo-eating: baby koalas, pandas, hippos and elephants are guilty of this fecal habit as well. In the case of these baby animals, they need to consume poo for health reasons. Born sterile, these animals get the bacteria they need to digest the rough vegetation in their diet from their mother’s waste. Luckily, humans don’t need to do this or I think my mom and I would have a much more complex relationship. 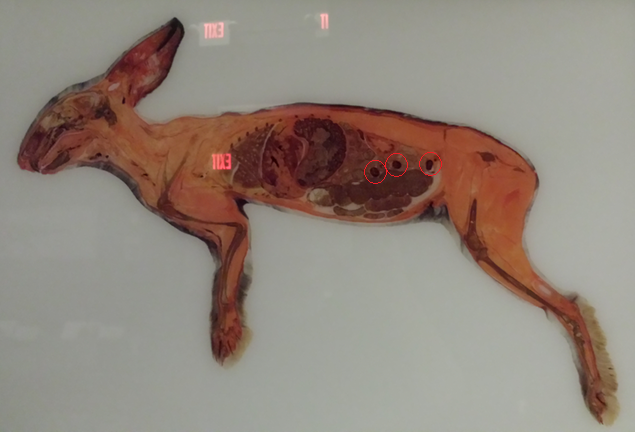 A plastinated rabbit slice from our feature exhibition, BODY WORLDS: ANIMAL INSIDE OUT. What could those dark round things be?

Some Animals Eat Their Own Poo

Of all the animals who are down with the deuce, the coprophagy championship clearly belongs to the rabbit. These long eared critters have two different types of excrement: normal, dry fecal pellets and soft, wet morsels called cecotropes. Rabbits aren’t born with the ability to efficiently break down the tough, fibrous plant matter they eat, so they rely on foreign bacteria, fungi and other microorganisms to do the job for them. The bacteria live in a pouch between the rabbit’s two intestines called the cecum. Once the rabbit pushes out a normal pellet poo, it’s rectum sucks the bacteria back up into the colon and into the cecum where the bacteria gets to work pulling even more nutrients out of the food. Packed with essential fatty acids, vitamins and minerals, the newly formed poo comes out of the rabbit’s backside and quickly finds it's way into it's mouth, which begins it’s second (and last) trip though the digestive system. This double-digestion system is similar to ruminants like cows and sheep, who regurgitate and re-chew their food to break it down further.

Rabbit experts don’t consider cecotrophy to be coprophagy, since the processes are means to different ends, but let’s call a spade a spade here—it's close enough.

Whether it be for food, protection or digestive aid, certain insects and mammals eat poo for essential reasons. Gilligan, on the other hand, always had a full food dish and a steady flow of kitchen table scraps, so it turns out he was probably just greedy, or bored, or both.

This article is dedicated to the loving memory of Gilligan Finnick. I'll never forget the time you ate a three-and-a-half pound bag of M&M's and threw up on the carpet.

Interested in animal anatomy? Want to see the insides of animals without having to do any of the dirty work? Come visit Body Worlds: Animal Inside Out, on now until March 28, 2016!