Electric current is the flow of electrons through a complete circuit of conductors. It is used to power everything from our lights to our trains.

In these activities, students will explore different kinds of circuits and investigate what is required to make a complete circuit.

Learn first how to wire a simple circuit, then STEAM ahead to combine art materials with the circuit and create an electric birthday card, party hat, or other seasonally-themed item. 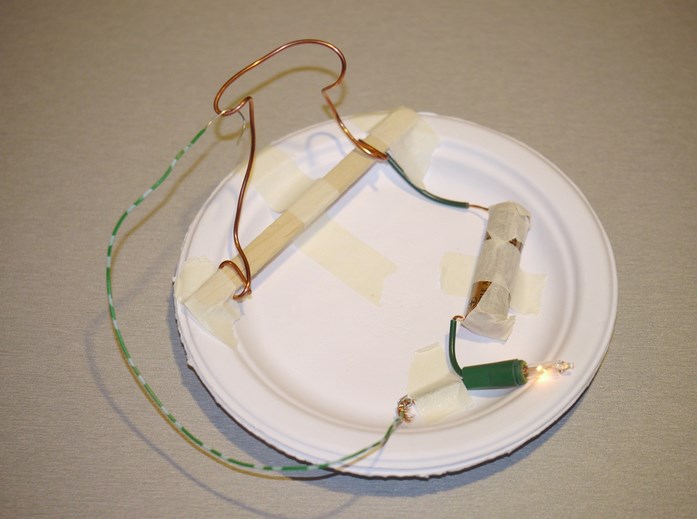 Electricity is used to operate your cell phone, power trains and ships, run your refrigerator, and power motors in machines like food processors. Electric energy must be changed to other forms of energy such as heat, light or mechanical in order to be useful. 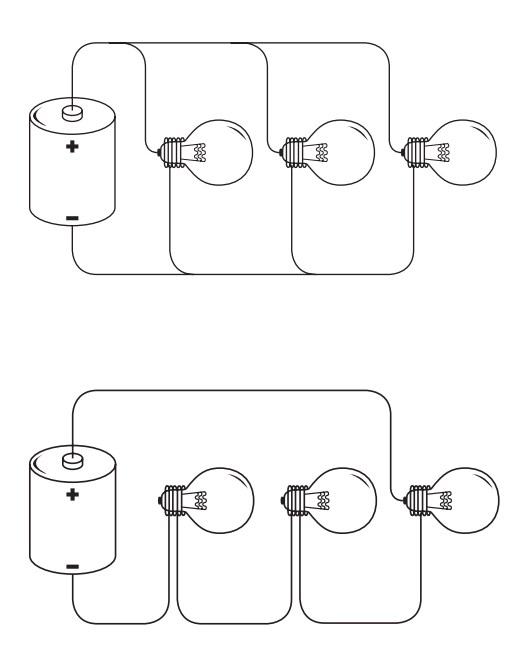 Voltage is sometimes called electric potential and is measured in volts. The voltage between two points in a circuit is the total energy required to move a small electric charge from one point to the other, divided by the size of the charge.

Resistance is measured in ohms and refers to the forces that oppose the flow of electron current in a wire. We can use resistance to our benefit by transforming the electrical energy lost in a resistor into heat energy (like in an electric stove), light energy (a light bulb), sound energy (radio), mechanical energy (electric fan), or magnetic energy (an electromagnet). If we want current to flow directly from one point to another, we should use a wire that has as little resistance as possible.

A neat analogy to help understand these terms: a system of plumbing pipes.

In this series of activities, students will experiment with wires, batteries, and switches to create their own electric circuits, while learning about voltage, current, and resistance at the same time.

You may notice that the symbols for several of the SI units (International System of Units) in this lesson plan are capitalized, such as the volt (V) and the ampere (A), as opposed to the ones you’re used to using (m, kg). It is tradition to use a capital letter when the unit is named after a person. In these cases, the units were named after Alessandro Volta and André-Marie Ampère. The unit for resistance was also named after a person (Georg Simon Ohm), but uses the symbol Ω which represents the Greek letter omega. These rules are important to follow since the lower- and uppercase letters may represent different units, such as the tonne (t) and the tesla (T). The one exception is that it is acceptable to use L for litres since the letter ‘l’ is often confused for the number ‘1’!

ammeter: An instrument used to measure the electric current in a circuit; the unit of measurement is amperes or amps (A).
circuit: A path for electric current to flow.
conductor: A substance made up of atoms which hold electrons loosely, allowing them to move through it more easily.
electric current: A continuous flow of electric charge moving from one place to another along a pathway; required to make all electrical devices work; measured in amperes or amps (A).
electrochemical reaction: A reaction that most often involves the transfer of electrons between two substances, either caused by or accompanied by an electric current.
electrode: A conductor through which a current enters or leaves an object or substance.
electron: A subatomic particle that has a negative electrical charge.
insulator: A substance made up of atoms that hold onto electrons very tightly, thus not allowing electrons to move through very easily.
parallel circuit: A type of circuit that allows current to flow through parallel paths. Electric current is split between the different paths. If light bulbs are connected in a parallel circuit, and one of the bulbs is removed, the current will still be able to flow to light the other bulbs in the circuit.
semiconductor: A substance made up of atoms that hold onto electrons with a strength between that of a conductor and that of an insulator.
series circuit: A circuit in which all of the components are connected along a single path, so that the same current flows through all of the components. If one of the light bulbs is removed, the circuit is broken and none of the other lights will work.
voltage: The potential difference between two points in a circuit, such as the positive and negative ends of a battery. It is often described as the “push” or “force” of the electricity. It is possible to have voltage without current (if the circuit is incomplete, for example, and the electrons cannot flow), but not possible to have a current without voltage. It is measured in volts (V).
voltmeter: An instrument used to measure the potential electric difference between two points in a circuit.

BC Hydro | Power Smart for Schools

To purchase small teaching light bulbs (with a rating of no more than 2 volts each): Boreal Science

Have you ever rubbed a balloon on your head? If you have, you may wonder why your hair…