Have you ever rubbed a balloon on your head?

If you have, you may wonder why your hair stood up on end!

When you rub a balloon on your head, electrons move from the atoms and molecules in your hair onto the balloon. Electrons have a negative charge, so the balloon becomes negatively charged, and your hair is left with a positive charge. This "separation of charge" is the reason for the collection of effects that we call static electricity.

In this lesson, students will explore static electricity through a series of demonstrations and experiments.

Everything we see is made up of tiny particles of matter called atoms. The atoms are made up of even smaller parts called protons, electrons and neutrons. An atom usually has the same number of protons and electrons, but sometimes electrons can be moved away from their atoms.

If you comb your hair,  for example, electrons leave the atoms and molecules in your hair and travel to the plastic comb. The comb, covered in negatively charged electrons, becomes negatively charged as well, and your hair is left with a positive charge. This “separation of charge” is the reason for the collection of effects we call static electricity. 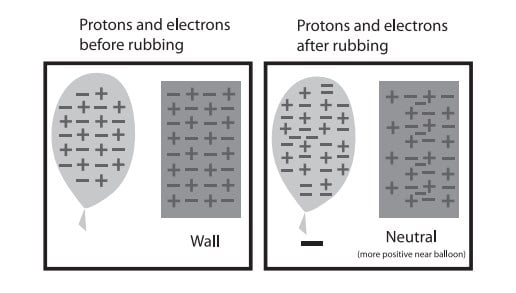 Electrostatic charges are not caused by friction, although many assume this to be the case.

Rubbing a balloon on your head or dragging your feet on the carpet will build up a charge, but so will ordinary walking or repeatedly touching your head with a balloon! It’s the mere contact between two different materials that causes charge to move from one object to another. Rubbing materials together can help move charge more quickly because more surface area is being contacted. Friction has nothing to do with the charge.

An important thing to consider when doing any of these activities is the weather: humidity in the air can make it difficult to build up charges, causing experiments to behave in unexpected ways!

The best “static” weather is clear, sunny, and cool.

BC Hydro | Power Smart for Schools

How Stuff Works | How do Van de Graaff Generators Work

Electric current is the flow of electrons through a complete circuit of conductors. It is used to power everything from…

In the activities that follow, students explore balloon properties and their use in demonstrating various scientific concepts. LIST OF ACTIVITIES…