There are many easy and fun experiments that can be done with eggs, encompassing a number of different scientific principles.

In this resource, students will demonstrate several scientific principles by exploring characteristics of an egg's material and shape that make it so versatile. 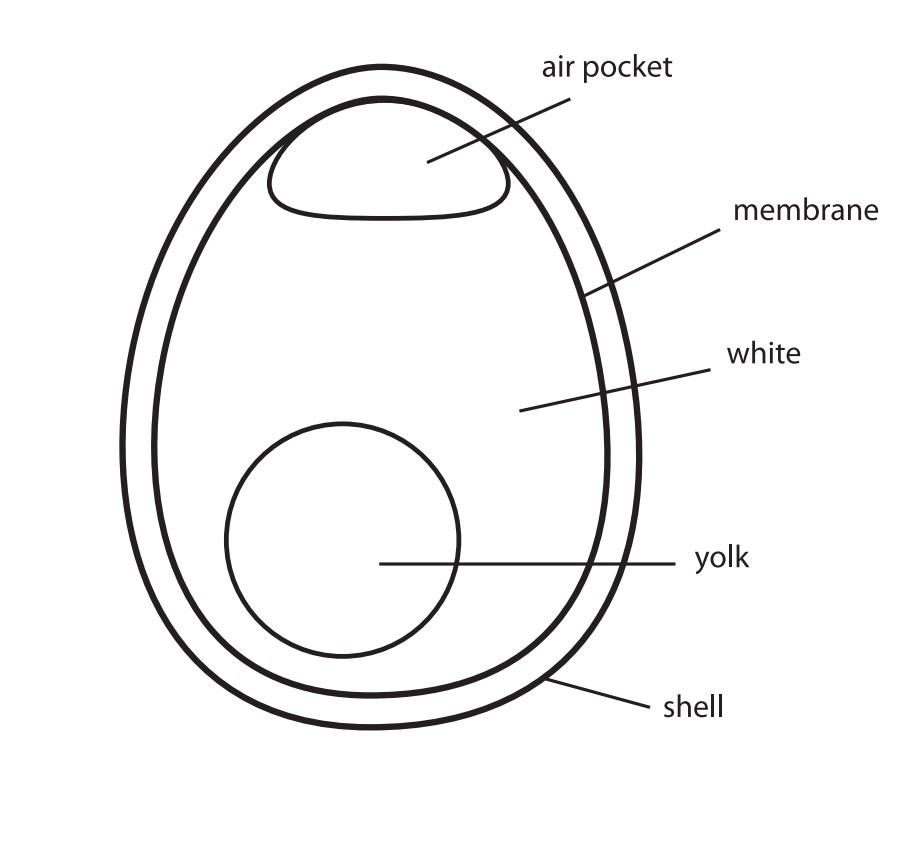 Calcium carbonate, or CaCO3, provides hardness and strength to things such as seashells, rocks, pearls, coral reefs, and eggshells. Since calcium carbonate is a base, it is no longer used for building purposes on its own (in limestone form) because it dissolves in acid rain.

A good quality eggshell will contain, on average, 2.2 grams of calcium in the form of calcium carbonate. Approximately 94% of a dry eggshell is calcium carbonate. The remainder is composed largely of phosphorus and magnesium, with trace amounts of sodium, potassium, zinc, manganese, iron, and copper. Immersing an egg in an acidic solution, such as vinegar, will disintegrate its shell through a common acid-base reaction.

An eggshell is a natural example of an arch. Arches, even those made of eggshells, are strong because they exert horizontal as well as vertical forces to resist the pressure of heavy loads. The crown of an eggshell can support a heavy load because the weight is distributed evenly along the structure of the egg.

Although the egg is strong in compression, it is weak in tension. Chicks are not strong, but by poking with their beaks from inside the egg, they are able to break out of their shells. They break the shell using tension. To make a structure strong with a tension weak material, such as an eggshell, forces must create compression and avoid tension. Fortunately, the arch/dome shape of the eggshell fulfills these requirements.

acid – A substance that reacts with a base. Commonly, acids can be identified as being sour-tasting.
Archimedes’ principle – A scientific law, put forth by ancient Greek Archimedes, that  the weight of any floating object displaces the same weight of the fluid that it is in.
base – A substance that can be thought of as the chemical opposite of an acid. Bases usually taste bitter and feel soapy.
compression – A force applied to the outside of an object that pushes inward, or towards the centre of the object.
concentration – In a mixture, the concentration of one substance is the mass of that substance divided by the total volume of the mixture.
density – Mass per unit volume. Density can be described as how heavy something is for its size.
diffusion – The spread of randomly-moving particles from regions of higher concentration to regions of lower concentration.
displacement – Occurs when an object immersed in a fluid pushes the fluid out of the way.
dome – A structural element of architecture that resembles the hollow upper half of a sphere, and can be thought of as a 3D arch.
friction – The force resisting the relative motion of objects or fluids sliding against each other.
inertia – The resistance of any physical object to a change in its state of motion or rest.
mass – Technically, the amount of matter in an object. Colloquially, “how heavy it is”.
membrane – A layer of material which serves as a selective barrier between two sides of an object.
osmosis – A process in which water moves through a membrane from a high concentration of water molecules to a low concentration of water molecules.
permeable – Describes a membrane that will allow all molecules small enough to pass through it by diffusion.
semi-permeable – Describes a membrane that will allow only certain molecules or ions to pass through it by diffusion.
tension – A pulling or stretching force.
volume – How much 3D space a substance (solid, liquid, gas, plasma) or shape occupies.

EDinformatics | Science of Cooking | The Anatomy of a Chicken Egg

BBC Earth Lab | How To Get an Egg in a Milkbottle