Just what does it take to fly to the moon... and beyond?

Take a trip into space with this package of out-of-this-world activities. Train like an astronaut, simulate space missions, build and test space technology and discover what life in microgravity is really like.

Do you have what it takes to travel to space?

Why is it so hard to get to space?

It takes a lot of energy to overcome gravity. Rocket engines need a lot of fuel to produce a strong lift, but fuel is heavy. German V-2 rockets (which were weapons) were the first to reach 100 kilometres above the earth’s surface; this is the distance that’s accepted as “the beginning of space”. The first satellite reached orbit in 1957 (Russia’s Sputnik satellites).

Fruit flies, monkeys and a Russian dog flew into space before humans even tried! The first human in space was Yuri Gagarin, a Russian cosmonaut. Since then, many astronauts from many countries have flown into orbit and 24 people have gone as far as the moon (12 of those people actually walked on the moon).

The International Space Station (ISS) is a satellite the size of a football field which is managed by the space agencies of the United States, Russia, Canada, Europe and Japan. It has been occupied continuously since 2000. The ISS is a space laboratory that is home to dozens of scientific experiments and the astronauts who conduct them. There have been at least three people on the ISS at any given moment since 2000. Crews are always coming and going, and stay for a few months at a time.

Gravity is the force between two objects, simply due to their mass. It’s a relatively weak force, so we don’t notice the gravitational force, say, between two pencils. But the earth is very heavy, so we definitely notice its pull on us. We experience gravity as a force that pulls us toward the centre of the earth – that is, it keeps us on the ground.

Many people believe that astronauts float in space because there is no gravity, but that isn’t true. The farther we get from Earth, the weaker the force of gravity becomes—but it’s still there! In fact, gravity is what keeps the ISS, satellites and the moon orbiting around the earth.

Astronauts in orbit are typically around 300 kilometres away from the earth. That sounds far, but it’s only about 1/50th the distance to the moon. At this distance, the force of gravity acting on the astronauts is about 90% of what it would be on the earth’s surface. 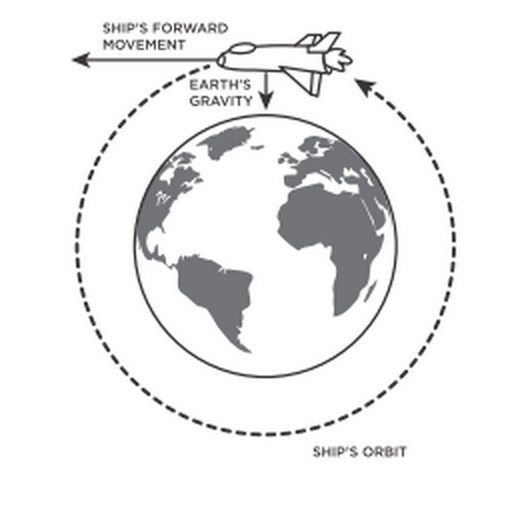 Our bodies in space

Weightlessness may look like fun, but it presents many challenges for astronauts to do even the simplest tasks. Astronauts need a lot of specialized equipment to help them do everyday tasks like eat, work, wash and sleep. In fact, if you use things like water filters or cordless vacuums, or make long-distance phone calls, you’re using technology that was originally developed for use in space!

Working in a microgravity environment affects more than just astronauts’ activities. It takes a big toll on their bodies too. Since our sense of direction relies on Earth’s gravity, astronauts get disoriented in space. This can lead to nausea. Although it usually only takes a few days for their bodies to adapt to their new environment, some astronauts continue to feel sick for their entire time in space.

Since astronauts don’t need to push against gravity, their muscles and bones weaken over time. The healthier they are before they go up, the better they’ll perform in space. Astronauts do balance, strength and agility training before they leave for their mission. While in space, they exercise for about 2 hours a day. After they return to Earth they need to continue training to regain their strength, agility and sense of balance. The longer astronauts are in space, the longer it will take them to recover, but training can help to lessen the effects of life in microgravity.

Living in space, away from all of the earth’s resources, means that astronauts are completely dependent on their spacecraft to keep them safe from the harsh external environment. Various innovations in design and technology provide astronauts with all of the air, food, water and other supplies they need to survive, stay healthy and perform the tasks required to complete their missions.

So far, humans have only been as far as our moon, but we have sent unmanned spacecraft into orbit and even to other planets and moons to gather information for us.

Unmanned spacecraft can travel huge distances and withstand harsh environments, so they can go where our technology cannot currently take humans. For example, in 1970, the probe Venera 7 landed on Venus—a climate much too harsh for humans to endure. Even Venera 7 could not last one hour under the enormous pressure and harsh temperatures of Venus.

Rovers on Mars have spent years gathering and sending back data about the Martian surface. Sending humans to Mars would pose many risks for the travellers and would cost much more, because it would require far more resources.

aerodynamics: The dynamics of bodies moving relative to gases, especially the interaction of moving objects with the atmosphere they are in.
astronomy: The study of space.
Canadarm: Canada’s famous robotic and technological achievement, this “arm in space” is attached to the Space Shuttle to help move payloads and perform robotic tasks.
Canadarm 2: The next generation of the Canadarm, Canadarm2 is also a robotic arm which is a part of the Mobile Servicing System on the International Space Station. It helped to construct the ISS and continues to perform maintenance on it.
celestial: Relating to the sky or space.
flyby: A type of space mission where a spacecraft travels near to (but does not land on) a planet or other celestial body in order to gather data.
gravity: A force of attraction between two objects, namely between the earth and everything on it; the earth’s gravity pulls objects down towards its centre. If objects are too small, gravity is not detected between them.
ISS: The International Space Station, a long-term research station in orbit around the earth.
manned spaceflight: Space exploration missions involving human travellers (i.e. astronauts).
microgravity: The experience of apparently having no weight (the condition known as weightlessness).
Mir: The first consistently inhabited long-term research space station, developed by Russia.
retrorocket: A rocket engine providing thrust opposite to the motion of a spacecraft, thereby acting as a brake and causing the craft to slow down.
rover: A space exploration vehicle designed to move across the surface of a planet or another body in space.
satellite: A naturally-occurring or man-made object in orbit around a planet or other celestial body.
terminal velocity: The point at which an object stops accelerating and begins to fall at a constant speed.
unmanned spaceflight: Spaceflight which does not involve a human traveller, but instead uses robotic equipment for exploration, like rovers.
weightlessness: The experience of apparently having no weight (occurring in microgravity).

Canadian Space Agency | Junior Astronauts
These activities are designed for youth in grades 6 to 9. They  focus on three streams—science and technology, fitness and nutrition, and communications and teamwork.

Canadian Space Agency | For Educators | Moving and Working in Space

HowStuffWorks | How Weightlessness Works | How You Sense Position and Motion

Space.com | Laika the Dog & the First Animals in Space

Want to do some science exploration that’s out of this world? You won’t need to “force” students to explore…