Want to do some science exploration that's out of this world?

You won't need to "force" students to explore the pushes and pulls that affect rockets!

In this set of activities, students investigate how and why rockets move by building and testing several different rockets of their own!

To make a rocket, you need a container with a pressurized gas or liquid inside.

A balloon makes a simple example. When it’s inflated, the air inside is under pressure from the stretchy rubber. When you let the air escape, it zooms out the nozzle while the balloon zooms in the opposite direction.

The rockets in these activities all use this principle to create thrust (the force that moves the rocket up and forward). 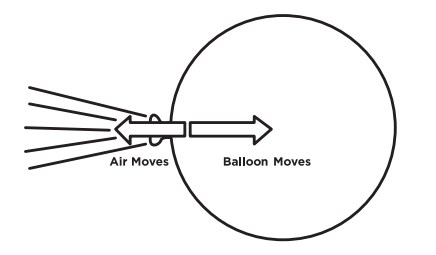 A better understanding of thrust and motion can help us to manipulate just how high and how far we send our rockets. We can understand it best by referring to Newton’s laws of motion. Sir Isaac Newton (1642–1727) was a scientist who applied his curious and systematic mind to everything from physics to theology. His work on motion was published in 1687.

Rockets and Newton’s Laws of Motion

Newton’s First Law
Every object persists in a state of rest, or uniform linear motion unless it is compelled to change that state by external forces.

In order to get a rocket to lift off, you need a force acting on the rocket (we call this force thrust). Without a force (a push or a pull) intervening, objects tend to keep moving if they’re moving and tend to stay stopped if they’re stopped. For example, a ball won’t move on its own until you kick or push it, and astronauts in space will keep moving in a straight line until they bump into something. (The rockets in these activities will always come back down, however, because the force of gravity slows them down and pulls them back to Earth.)

Newton’s Third Law
For every action there is an equal and opposite reaction.

Counter to what you might expect, it’s a downward force that pushes a rocket upwards. That’s because if you push on something, it pushes right back. For example, in order for you to walk forward, your feet have to push on the ground and the ground has to push back on you. The pressure inside the rocket pushes the gas or liquid downward; the gas or liquid pushes the rocket up!

When something is thrown, shot or launched through the air we call it a projectile. The shape of a projectile’s path is called a trajectory. Throw a ball up at an angle and it will go up and then come down at the same angle some distance away from you. When you launch your toy rockets, they will come back down to earth at the same angle at which they were launched. The shape of the trajectory is a parabola (an upside-down ‘U’).

What makes this happen?

When you launch a pop bottle rocket, it is moving both upward and forward. Let’s look at its upward motion first. We know from experience that what goes up must come down. Once the initial thrust is complete, it is gravity that brings our rockets back down. Imagine throwing a ball in a place without gravity. Once it started moving, it would continue in a straight line forever (that’s Newton’s first law). But with gravity pulling down on the ball, the ball will slow down, stop, and fall back toward Earth. 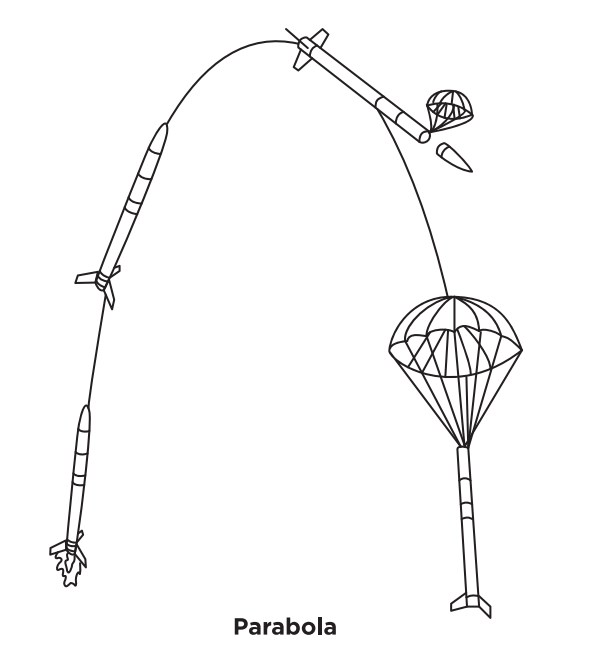 How about the forward motion? Now, imagine you kick a ball off a cliff while a friend drops a ball straight down from the same cliff. The same gravity is acting on both balls, so they fall at the same rate and hit the ground at the same time. However, the ball that you kicked travels forward as it falls, so it lands some distance away from the cliff. 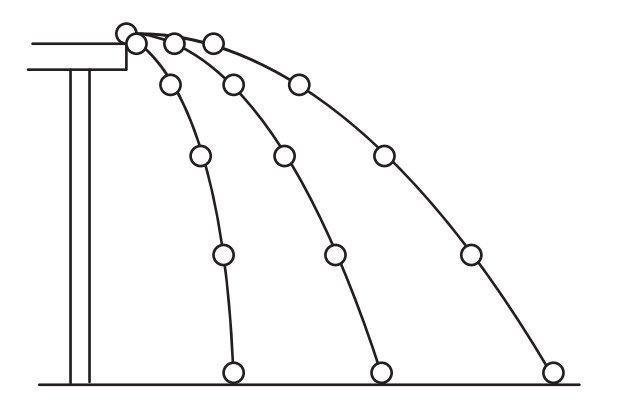 In practice, the rockets experience drag caused by air resistance. The force of drag acts in the opposite direction to the rocket’s motion. Rockets are designed with fins and nose cones to minimize drag as they fly.

The launch angle is also important as it governs both the distance and height that a rocket will attain. The distance a projectile travels is referred to as its range.

Examples of the theoretical trajectories for four different launch angles are shown below: 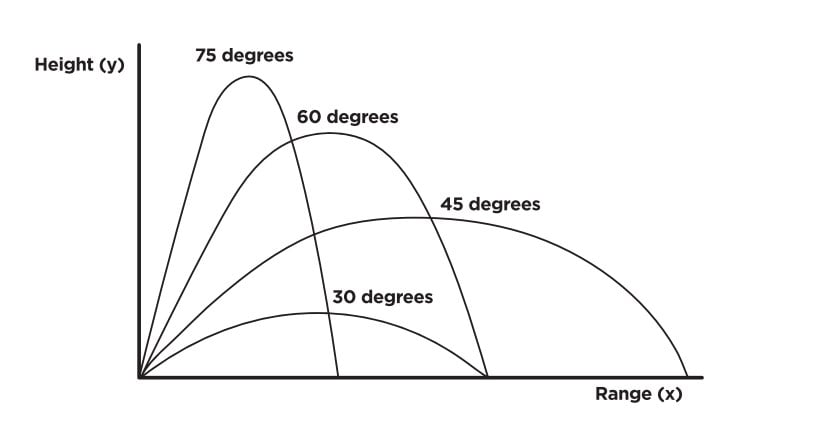 A launch angle of 45 degrees maximizes a rocket’s range because it will it travel horizontally as far as possible before gravity brings it back to Earth.

acceleration: The change of velocity (speed). If you are speeding up, your velocity is changing and you are accelerating. Deceleration is when you are slowing down.
action–reaction: The third of Newton’s laws of motion states that forces occur in pairs; this is related to the fact that a force results from the interaction of two objects. Every force (‘action’) on one object is accompanied by a ‘reaction’ of another, of equal size but in the opposite direction.
aerodynamics: The study of the motion of air and other gases and how they affect the motion of objects moving through them.
drag: The force that acts on the surface of an object moving through a gas or liquid that slows it down. It acts in the same line of motion as the object but in the opposite direction. Drag is caused by the fluid resisting the movement of the object.
force: Any influence that causes an object to undergo a change in either its movement or direction. It can cause an object with mass to change its velocity, i.e. to accelerate.
gravity: The natural force of attraction exerted by the earth upon objects at or near its surface; it draws them downwards toward the centre of the planet.
inertia: An object’s resistance to change in motion.
lift: ‘Upwards’ force created by the movement of air both above and below a wing.
mass: An object’s quantity of matter. The mass of an object is multiplied by gravitational acceleration in order to determine its weight.
motion: The act or process of changing position or place.
Newton’s laws of motion: Three physical laws that form the basis for classical mechanics. They describe the relationship between forces acting on a body and the body’s motion due to those forces.
parabola: A symmetrical, open plane curve; shaped like an upside-down ‘U’.
pressure: The force exerted on a surface per unit area.
projectile: Any object that, once projected or dropped, continues in motion (without an internal source of acceleration) and is influenced only by the downward force of gravity.
propulsion system: The type of engine used to power a rocket. Because there are many different types of rocket engines, they are all referred to as propulsion systems because of how they propel the vehicle.
range: The distance traveled by a projectile.
thrust: The force that acts on rockets or airplanes to make them move forward. This force is created by the engine, also known as the propulsion system.
trajectory: The path followed by a projectile moving under the influence of forces.
velocity: An object’s speed plus its motion in a given direction.

Science North: Cool Science | How to Build a Stomp Rocket

The Air Up There

In this unit designed for kindergarten classrooms, students participate in activities exploring air and wind. The Air Up There…

Just what does it take to fly to the moon… and beyond?  Take a trip into space with this package…

Sending astronauts into space is complex and risky. This activity will help students evaluate the pros and cons of piloted and…