In this activity, students get the opportunity to see and hear sound waves by experimenting with tuning forks.

A tuning fork is a two-pronged fork with the prongs (tines) formed from a U-shaped bar of metal (usually steel). It reaches a specific constant pitch when you set it vibrating by striking it against a surface or with an object. The pitch that a particular tuning fork generates depends on the length of the two prongs. Its main use is as a standard of pitch to tune other musical instruments.

One reason for using a fork shape is that the handle vibrates up and down as the prongs move apart and together. The handle motion is small, which means you can hold the fork by the handle without damping the vibration, but it's strong enough that the handle can transmit the vibration to another object. A resonator (a type of a hollow rectangular box) is often used. The object amplifies (increases) the sound of the fork.

In this demo, the student's arm acts as a resonator to direct path of the vibration to the ear, amplifying the sound of the fork. The molecules in the student's bones vibrate. Sound doesn't only pass through air, it can also pass through solids! 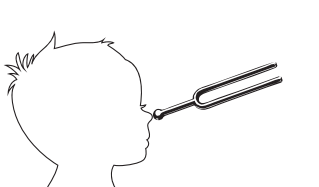