These activities will inspire your students to ask questions and seek answers about motion. Things that roll and spin behave in ways that are often surprising or counterintuitive.

Feel free to do these activities separately or together and please adapt them to the needs and abilities of your class.

Are you ready to get rolling (or rather, spinning) ?

When playing with different tops, you may notice that some spin longer than others. Heavy tops spin for a longer time than light ones when launched at the same speed. The faster they’re spinning when launched, the longer they spin. The combination of mass and speed is known as momentum.

So, a 1kg rabbit going 40km/h has the same momentum as a big 40kg dog ambling along at 1km/h. The more momentum something has, the harder it is to stop. But what stops the top? Friction between the stick and the floor is the main culprit.

The momentum of spinning and rolling things is called angular momentum.

With tops, is that it matters where you put the weight. The farther away from the stick the mass is, the more angular momentum the top has and the harder it is to stop.

What about getting things moving in the first place?

To make something move, you need a push or a pull force. To make something roll or spin, the force has to be some distance from the object’s centre of mass. When you launch your tops using an elastic band, you pull from the side of the stick, just beside the centre of mass. The energy stored in the stretch of the elastic band is transferred to the top.

Part 1: Make Your Own Top

Teacher Tip: Depending on how much experience your group has had with tops and spinning toys, you may want to start with time for the students to play with a variety of commercial tops. 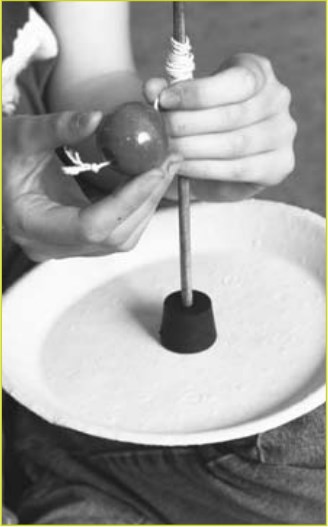 Hint: Tops spin well on uncarpeted floors. If you have a carpet which interferes with your tops, spin them on the lids from ice cream pails.

Tops figure into many cultural traditions. Investigate, for example, dreidels, giant wooden tops used since the tenth century in Ta Hsi in Taiwan, or those tops used by the Haida and Tsimshian of the Pacific West Coast.

For example, if you add weights and also try a new method of launching your top, you will not know which caused the change in top behaviour.

Teacher Tip: This might be a good time to introduce your students to using charts and tables to keep track of results.

A top made with a felt marker or a pencil as a stick creates surprising and beautiful artwork. Wool can be spun with a hand spindle, which uses a spindle whorl as a flywheel to add momentum to a spinning stick. Coast Salish artisans have traditionally decorated their spindle whorls in a way that creates fascinating patterns as the whorls are spun. Contemporary artist Susan A. Point creates decorative spindle whorls in this tradition.

In this make and take, students exploit the force of drag to make a parachute that will drop as slowly…

In this activity, students practice their coordination and observation skills and produce paintings using only marbles, paint, and tilting a…