In this activity students will explore capillary action and osmosis by making a simple recycled self-watering planter from a pop bottle.

Once put together, water will be able to move up the wick and into the soil from the reservoir by capillary action.

The cloth of the wick is made of many tiny fibres with spaces in between, water molecules will stick to each other (cohesion) and stick to the fibres (adhesion) to fill the spaces between fibres.

Water tends to move from areas of more water to areas of less water (osmosis). When water is lost due to evaporation from leaves, it is replaced as plant roots pull water from the soil. In this planter, water is moved into the soil out of the reservoir via the wick.

Capillary action or wicking: the ability of a liquid to flow in narrow spaces without the assistance of, or even in opposition to, external forces like gravity.

Cohesion: The attraction of water molecules to each other. Water molecules tend to stick to each other in a regular pattern due to the extensive hydrogen bonding. This phenomenon, called cohesion, is easily observed when you carefully overfill a glass with water (by just a little bit!) and observe the water molecules holding together above the rim; this is called a meniscus (eventually, however, gravity overcomes the hydrogen bonds and the water molecules spill down the side of the glass). Likewise, the cohesive property of water allows tall trees to bring water to their highest leaves from underground sources.

Osmosis: the movement of water from an area with more water to an area of less water, through a selectively permeable membrane.

Evaporation: the process by which water changes from a liquid to a gas or vapour. 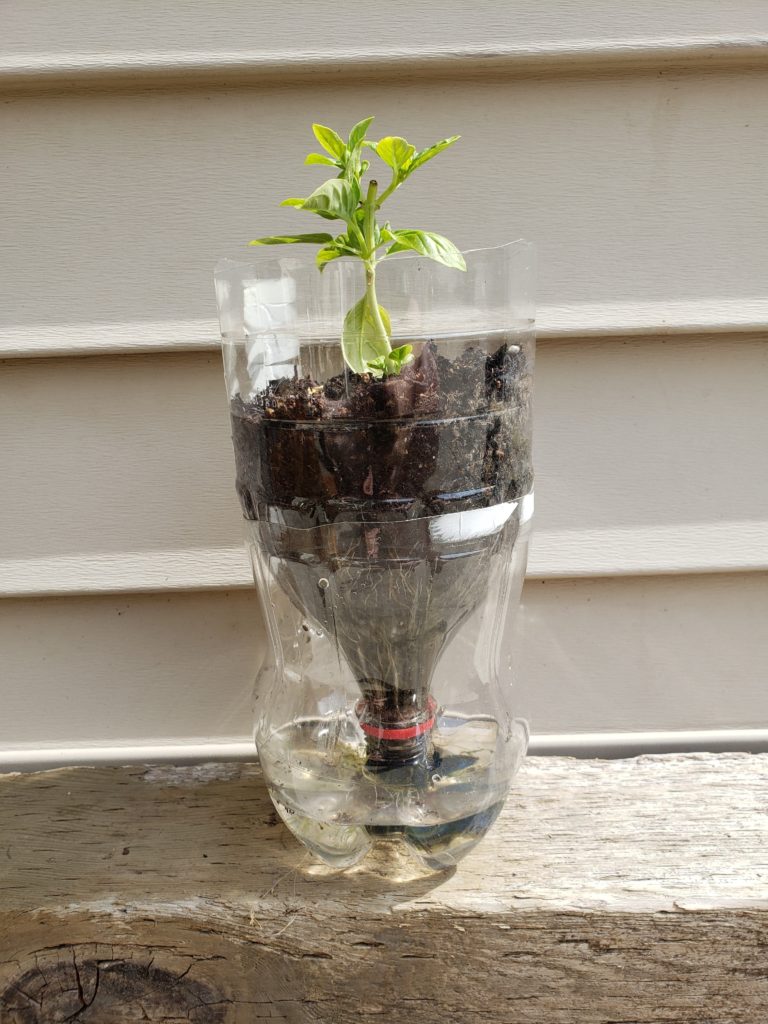 Because of the clear bottle, you will be able to watch the plants roots grow. This is especially interesting with seeds.

Instead of a pop bottle, any set of containers will do as long has you have a hole for the wick and the planter can sit above the reservoir with the wick in place.

Science World | YouTube| Capillary Action:  How to Walk Water From One Cup to Another

Refuse, Reduce, Reuse, Recycle and Rethink! The culture of consumption is wasteful in its use of resources. The phrase…

In this activity, students make and take home their own water-cycling terrarium. They will experience how an environment changes and…

In this game, students act out the water cycle by becoming water molecules and simulating evaporation, condensation and precipitation.  Earth is…